Chris Rock has a new film coming out in December.  It's screened a few times here in New York City and entertainment reporters/film critics whose work I respect tell me that it's excellent.  One told me that Rock's new effort as an actor, writer and director deserves the kind of praise filmmaker Woody Allen got in the 1970s and 1980s for films such as Annie Hall, Manhattan, Broadway Danny Rose and Hannah and Her Sisters.  This new Chris Rock film is called Top Five and co-stars actress Rosario Dawson. 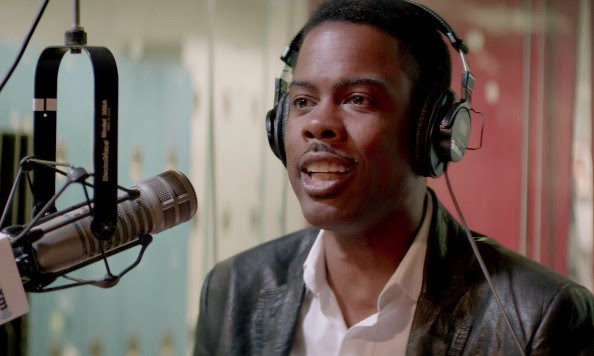 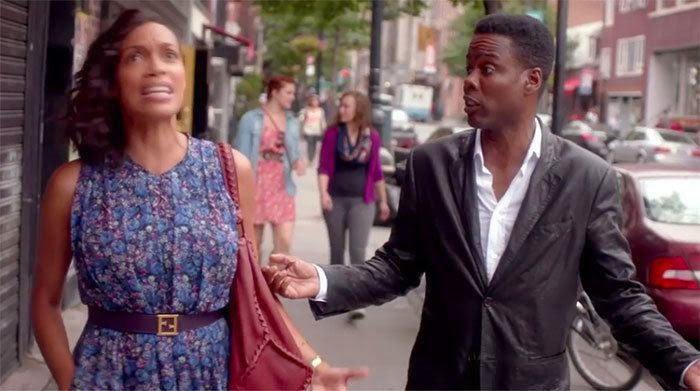 I was really jealous of Mo Rocca today while I watched CBS Sunday Morning.  Rocca did a mighty fine interview of Rock, an interview I wish I have conducted.  (Full disclosure:  After my VH1 veejay and talk show host years, I pushed to be an entertainment contributor on that CBS show.  I pushed for years.  I could never get an audition or an interview.)  Chris Rock and Mo Rocca discussed the comedian/actor's career.  Chris described his film career as "middlin'."  Rocca was surprised but I totally understand it.  I thought of something I tried unsuccessfully to get across to my former VH1 co-worker, Rosie O'Donnell, who wondered why I'm not working. 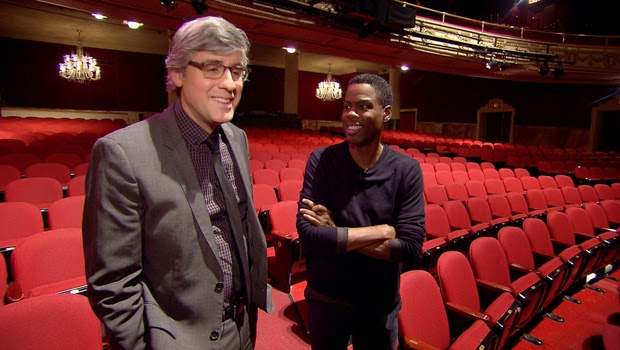 Rock knows that, in show business, the playing field is still not exactly level when it comes to black performers.  It's not just casting.  We're often lucky if we can get an audition or interview to be in consideration for the job.  I've seen talented, responsible, unemployed ethnic actors struggle to get work and auditions in New York City.  But Andy Dick can get drunk, get behind the wheel, crash his car into a bus full of elderly nuns, get out of the car wearing nothing but a thong and clown shoes and get an offer to make thousands of dollars on Dancing With The Stars.

We wind up looking at things in terms of race.  And we wonder why non-minorities don't notice the same things or ask the same questions we do.  Take network TV news -- the Monday through Friday evening newscasts you see on ABC, NBC, CBS.  There has not been a black anchor on one of those networks since the late Max Robinson anchored on ABC in the early 1980s.  He died at age 49 in 1988.  If NBC's Brian Williams quit next year, I'd give the anchor seat to Lester Holt.  But that's just me.  None of those three senior networks has had a black host of a late night show nor did any have a black film reviewer on a weekly basis on its morning news shows.  Heck, you rarely saw black film critics on local NYC television news and there are plenty of black/Latino film critics in this town who'd love some TV exposure outside of Black History and Hispanic Heritage months.  When have you ever seen a black female review new movies on a TV newscast?  You'd think they're harder to find than Sasquatch but they're not.  New York City has knowledgable black female movie critics -- but they're rarely picked to be on TV.  Where are the black/Latino/Asian talents as movie channel hosts or guest co-hosts?  In October, Turner Classic Movies had a month-long salute to Africa.  I love TCM.  But who was the guest host?  Someone like Oscar winner Louis Gossett Jr., LeVar Burton, Leslie Uggams or Diahann Carroll, one of the few African-American women to be an Oscar nominee for Best Actress or Bryant Gumble, the former Today host who was the force behind the show's week-long ratings champion week in Africa back in the 1990s?  No.  The guest host was Alex Trebek.  Which episode of Roots was he in?

Rock was an Oscars host and, as Rocca said, was too controversial for the Academy.  Chris Rock poked fun at veteran stars such as Clint Eastwood.  However, years later, the Academy picked Seth MacFarlane to host the Oscars.  He's the writer, director, producer -- the big talent -- behind TV's boundary-blasting animated series, Family Guy.  In one episode, MacFarlane used the 1963 assassination of President John F. Kennedy as comedy material. 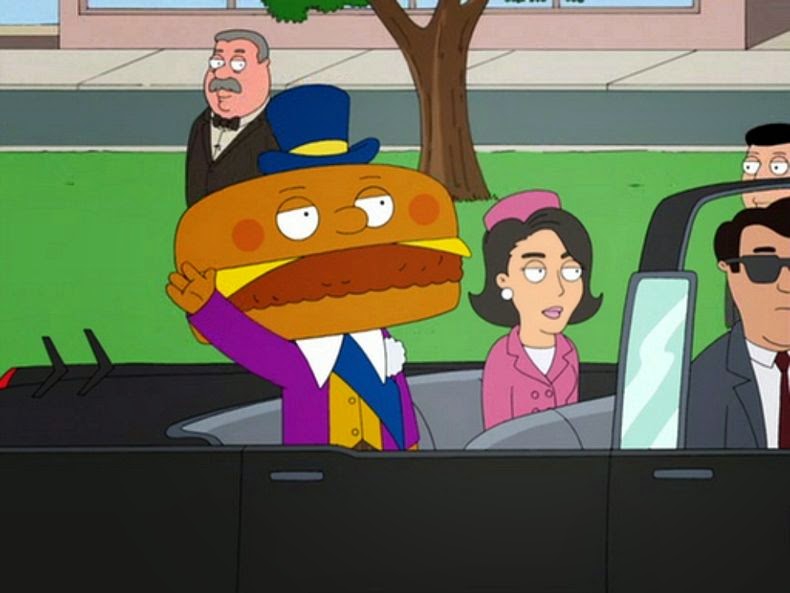 Hello?!?! Seth got to host The Oscars years after that aired and after Chris Rock hosted.  As a viewer, I was more nervous about him than I was about Chris.  I think Rock touches on some of these wacky double standards in Top Five.  Also, it can be tough for ethnic actors to move on to something else to distinguish themselves in their careers.  Tough, because we're trying to get someone's attention so we can get the opportunity or trying to grow out of a certain limiting image.  I'll use myself as an example.  Rosie O'Donnell had her celebrated daytime talk show, she went on to a short-lived talk show on Oprah's network and now she's on The View.

I never got another national talk show opportunity after my VH1 years -- and I really wanted one.  Nor could I get a broadcast agent.  Throughout the 1990s, local TV news execs hired me but were reluctant to let me sit at the desk in the studio and do regular film reviews and such.  They wanted me on the streets as the funny guy -- like Jim Carrey in the first 20 minutes of Bruce Almighty.  Here's a sample of my old VH1 talk show:
After my local NYC morning news program days in the 1990s, I got myself a Food Network host gig and made my comic acting debut as a recurring character in satirical political news features for The Onion.

In 2008, I tried yet again to get a good broadcast agent.  I had a meeting with ICM here in New York City.  It's a fine, top quality agency.  I met with the broadcast agent (no longer there).  Here's the short demo reel of mine the agent watched.   It's got national TV host and acting bits:
When we met, I was a full time talent working with Whoopi Goldberg on her national weekday morning show.  My Food Network show, called Top 5, was in its sixth year of broadcast and repeats aired Monday through Friday.  The agent turned me down, saying "I wouldn't know what to do with you."

Mo Rocca did humorous political pieces for The Daily Show, he now hosts a show on the Cooking Channel and he's doing celebrity interviews on CBS Sunday Morning.

Somebody knew what to do with Mo.  He is one lucky white dude.

I cannot wait to see Chris Rock's Top Five.  If you have time, go to the CBS website and watch Mo Rocca's Sunday Morning interview of Rock:
www.cbsnews.com. 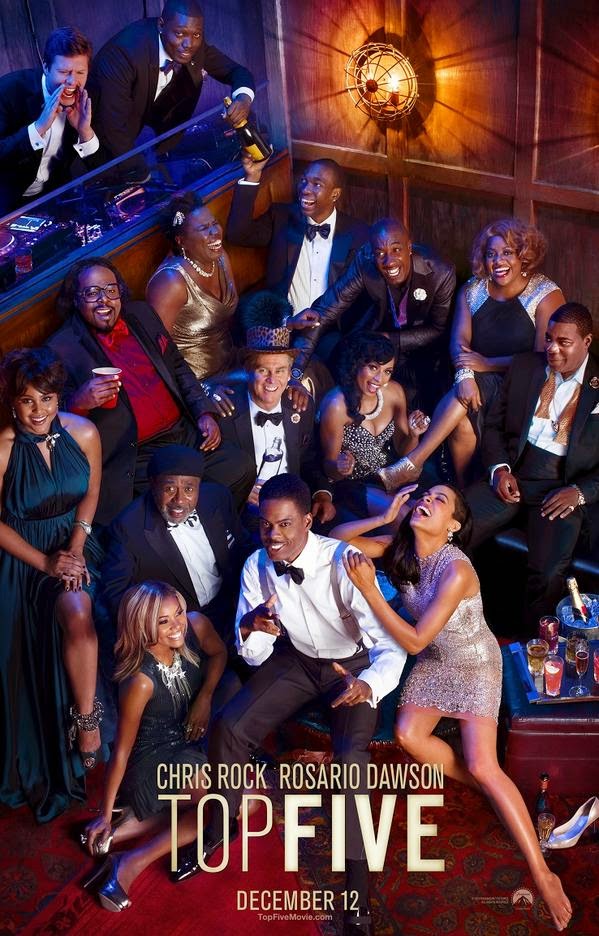