Every movie cannot be a classic.  But you, as a moviegoer, have every right to hope that the feature you pay to see is, at least, entertaining.  Nightcrawler focuses on the world of TV journalism.  Is it a through-and-through  classic like Network or Broadcast News?  No.  Is it entertaining?  Yes, very.  And it subtly makes some razor sharp points about TV today -- and current state of class in America.  I paid to see Nightcrawler and I feel that I got my money's worth.  You've got to give Jake Gyllenhaal credit for this.  He produced and stars in a film that makes a strong contemporary social comment.

About his character and the way he plays him, I'll put it this way using a famous Hollywood character.  If it was 1959 and Alfred Hitchcock was auditioning young actors to play Norman Bates in Psycho, to be released the following year, this performance in Nightcrawler would've been Jake Gyllenhaal's audition. 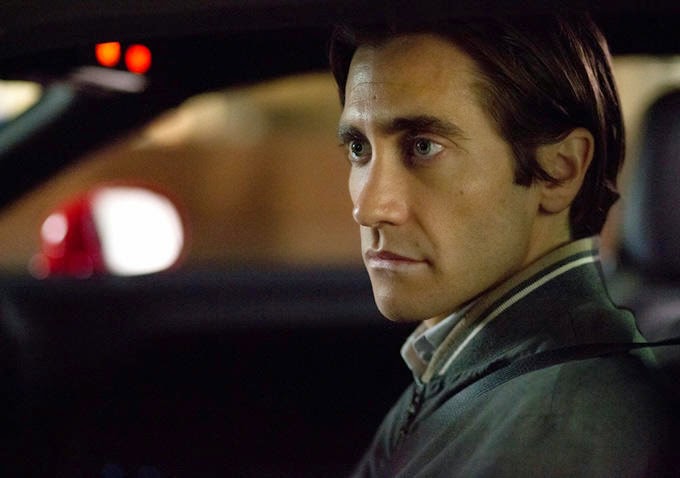 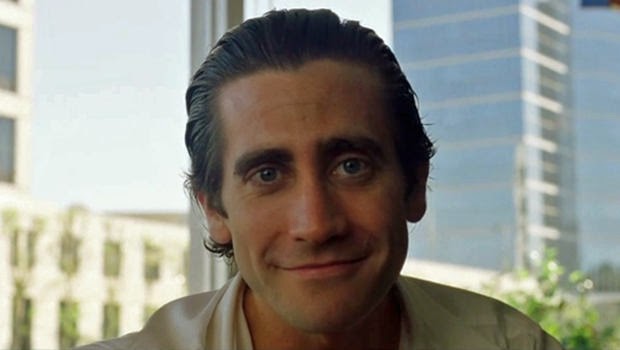 Lou Bloom in Nightcrawler appears to be a slightly quirky guy with traces of an All-American charm.  He seems to be the kind of young man who is willing to work hard and make something of himself.  However, Lou is really a criminal and a mental defective.  What people see is not the whole story and not the true story. 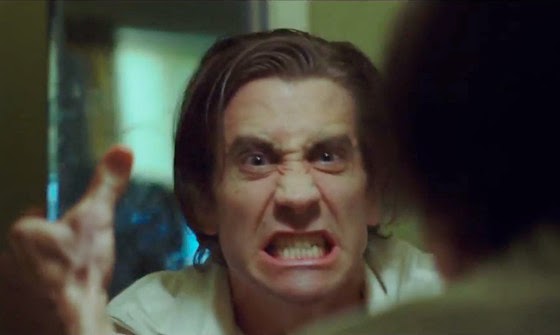 We meet him at night in Los Angeles.  He looks gaunt.  His eyes are dark with sort of a raccoon resemblance.  He commits a crime.  He wants money.  He becomes obsessed with the money and the attention that news stringers get.  These are sort of video cowboys who get to the scene of a crime or accident and shoot often-graphic footage to sell to local newscasts.  The footage will boost ratings.  The stringers get paid for it.  (These are not the union camera crews that shoot for news departments.)

Lou's madness makes him money.  He feeds off the misfortune of others at night in order to shoot footage to sell to a local Los Angeles news director, played terrifically by Rene Russo.

This is a juicy role for an actress over 40 or 50.  This news director is smart and good at her job.  However, she's an executive given an overnight shift.  The "zombie" shift, if you will.  And her contract expires soon.  She's a middle-aged woman who needs to boost ratings for her early morning newscast in order to re-negotiate her contract, stay employed and be able to keep up her healthcare payments.  Such is the financial state of society today.  Rene Russo rates Oscar nomination consideration for this performance. 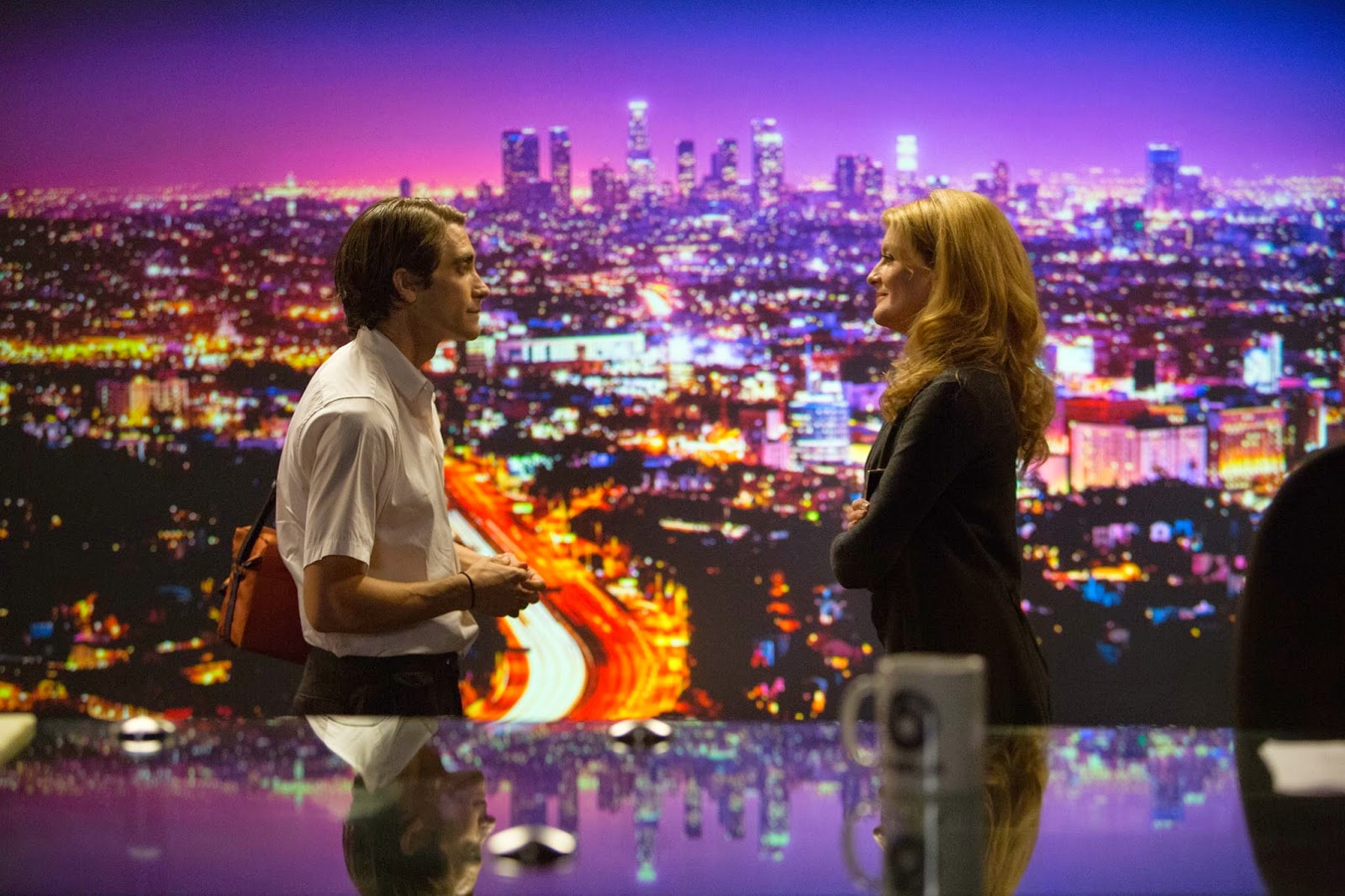 Lou is truly crazy.  Crazy enough to break the law in order to get good, gory, exclusive footage that he can sell to a news department for top dollar.  He's an irresponsible citizen.  He sells himself as a producer, the head of his own company and hires a young, broke, responsible Latino.  Rick has no apartment and took three buses just to get to his "job interview" with Lou Bloom.  Lou assumes a young, attractive, broke Mexican dude turns tricks for money.  Rick doesn't turn tricks.  He becomes Bloom's video partner on their nocturnal news chases in L.A.  Rick needs money but he does have a moral compass. 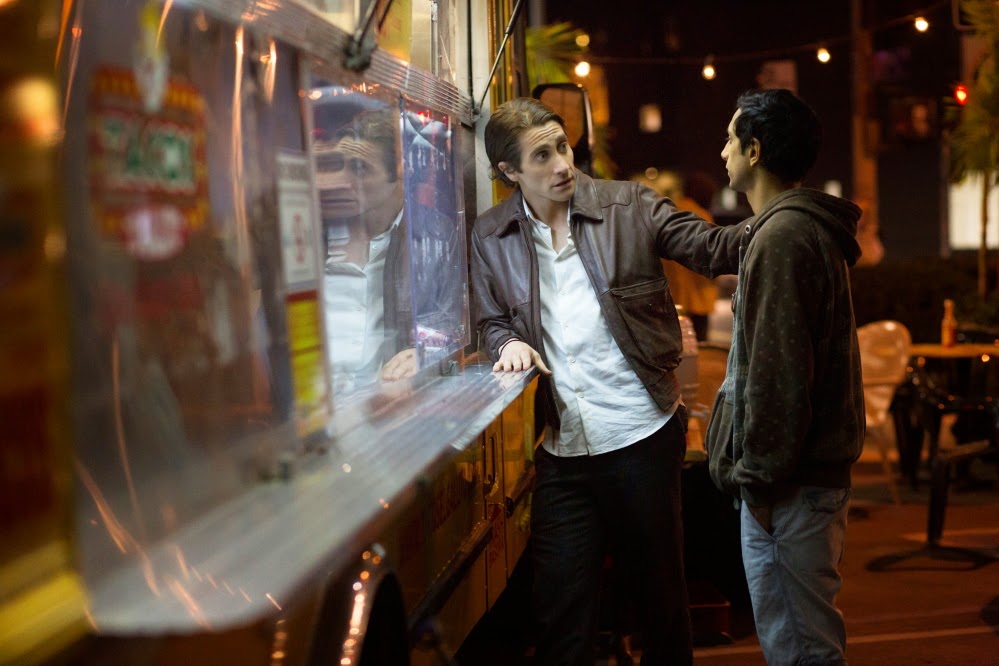 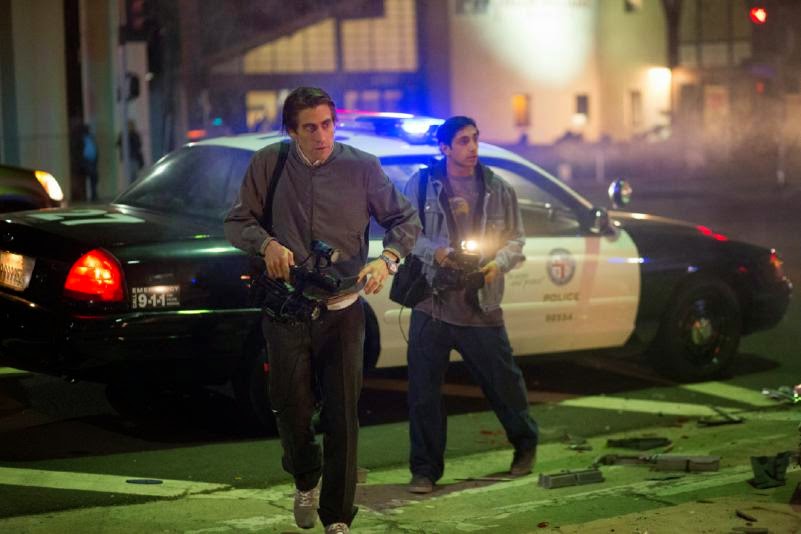 Lou Bloom has no moral compass.  He is a corrupt photographer.  An observer without human compassion.  He believes that he's a valuable asset to the company. 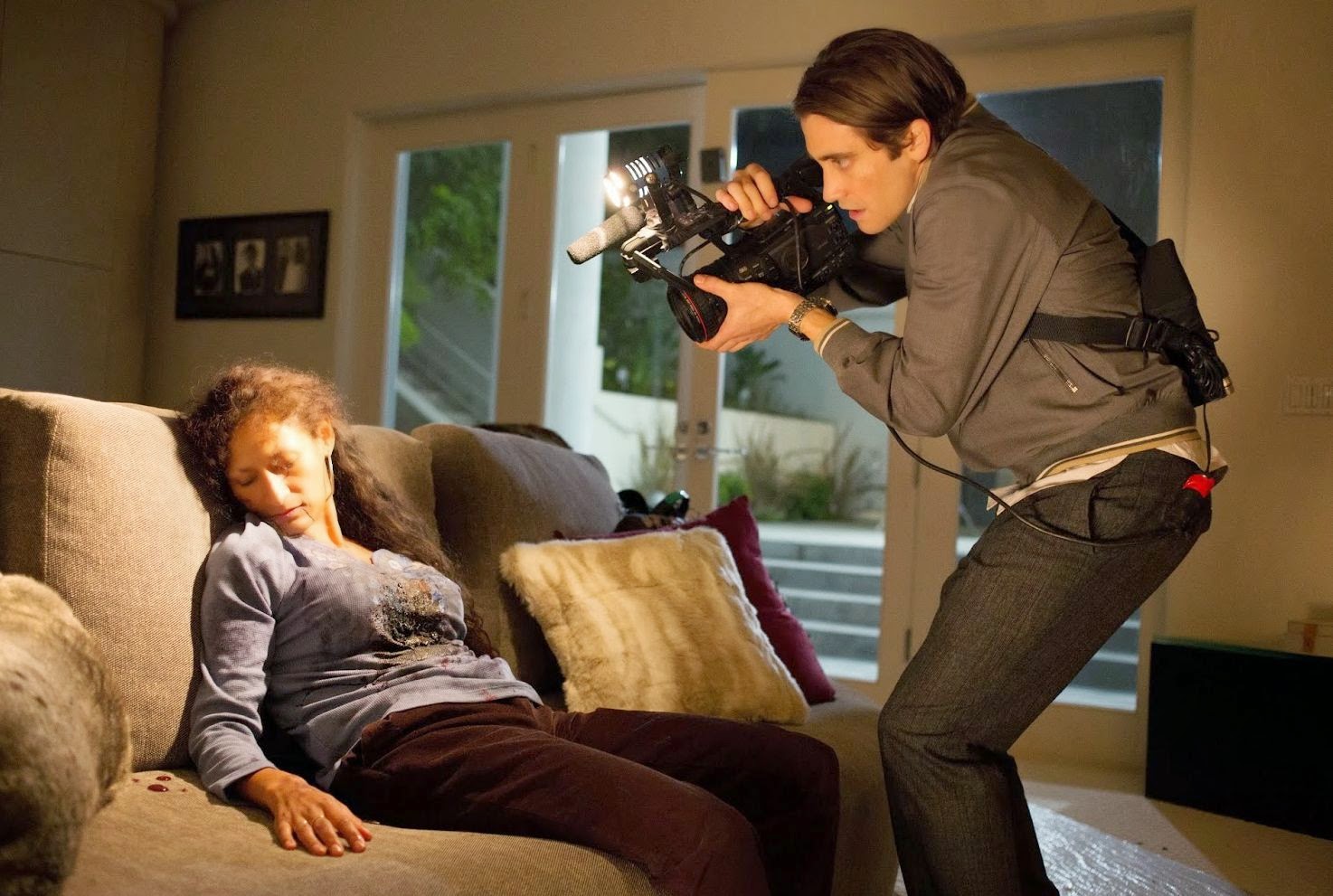 He reminded me of a film I studied when I was in college -- 1969's Medium Cool directed and written by renowned cinematographer Haskell Wexler.  In that film, Robert Forster is the TV news cameraman who seems detached from his subjects.  He just shoots images. 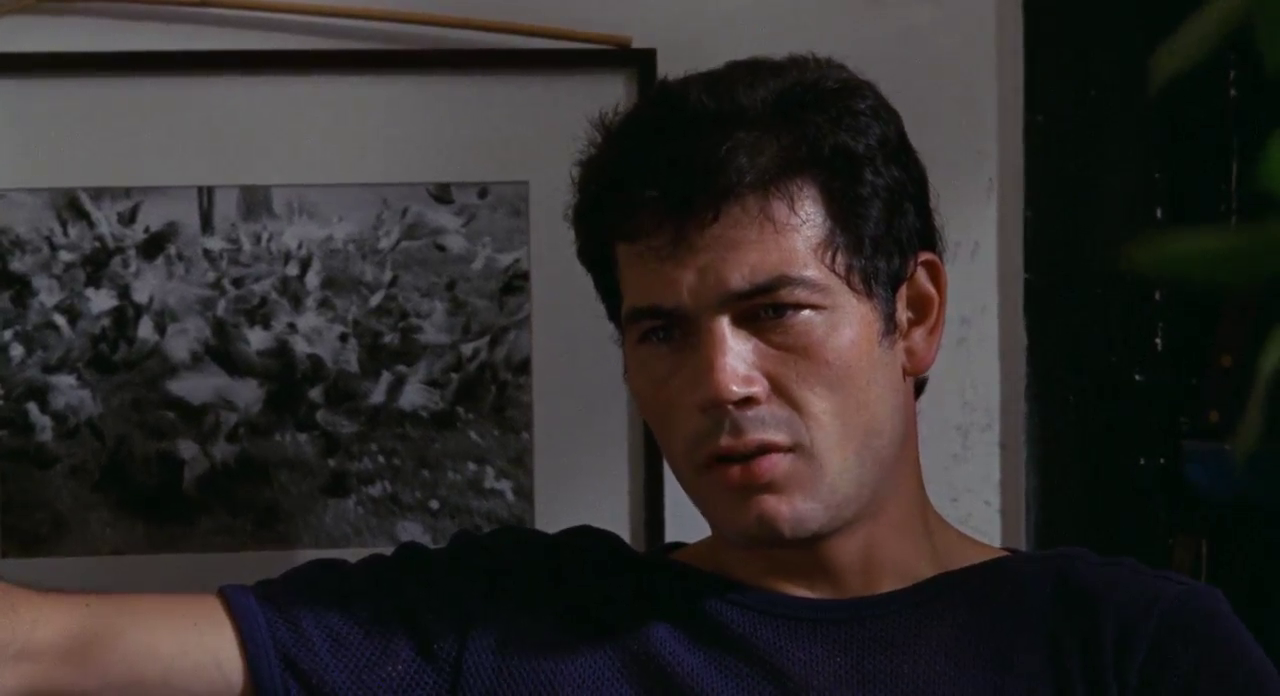 Medium Cool presents us with images of violence, class and race.  The detached news cameraman transitions from being just an observer to being involved due to the violence of national politics in 1968 Chicago.  Haskell's provocative and acclaimed film also stars Peter Bonerz and Peter Boyle, both later known for TV sitcom work. 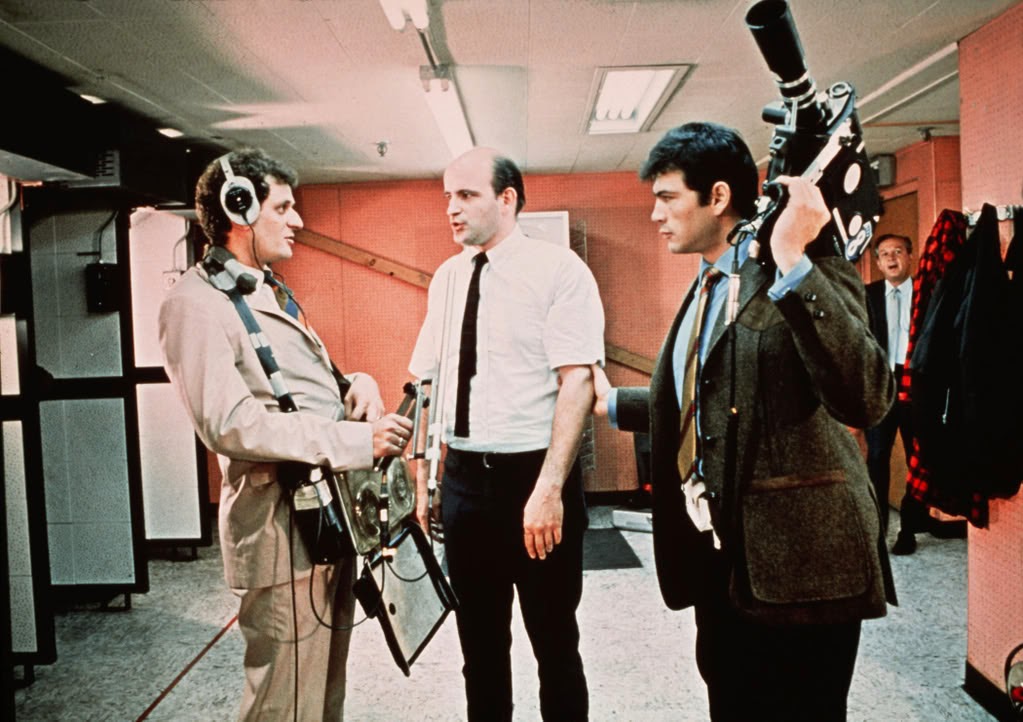 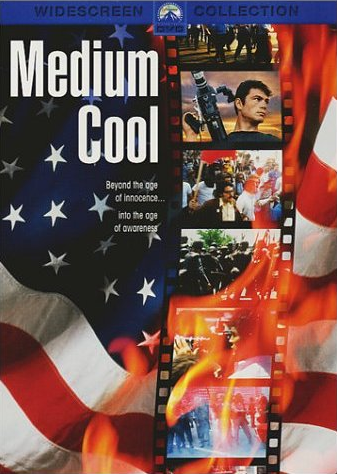 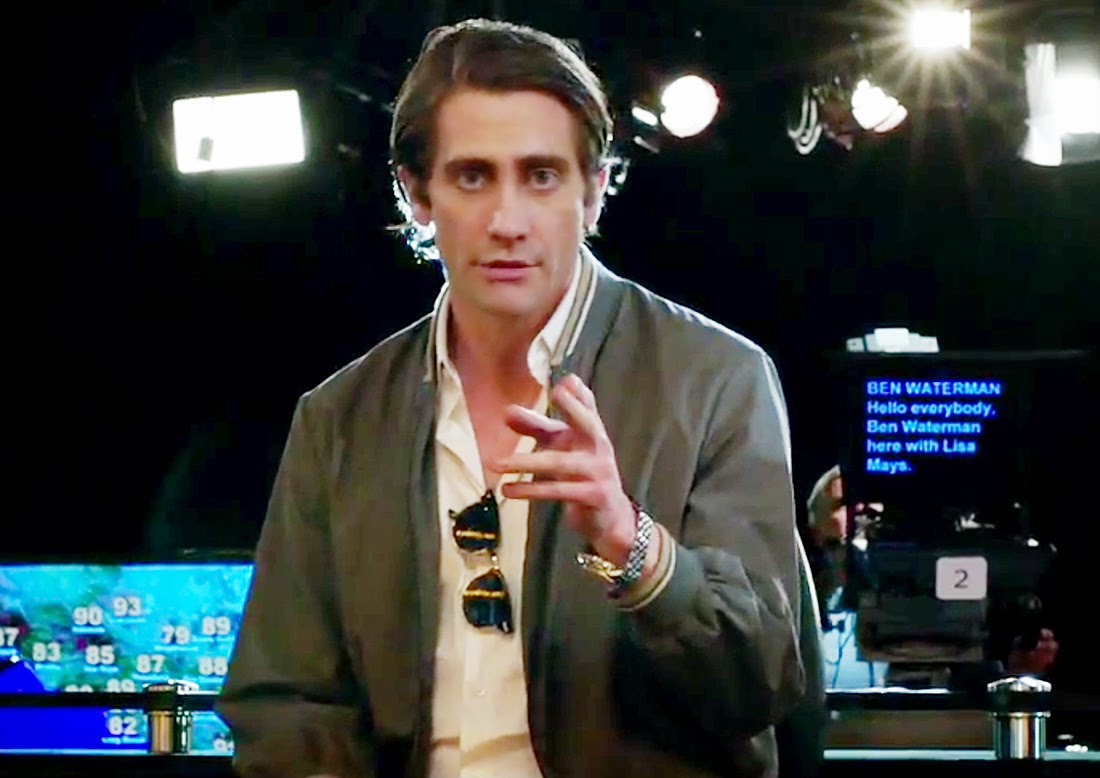 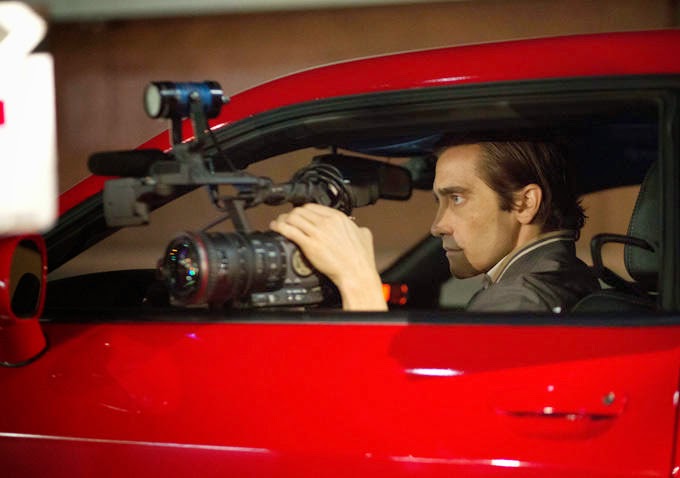 He has no journalistic background.  He didn't even watch the news on a daily basis.  He doesn't read news publications.  We get images of violence in Los Angeles.  We get talk about class and race -- and those talks really made me say "Wow!" when watching Nightcrawler.

I've been watching a lot of network morning news lately.  Blondes seems to be highly prized by news executives.  On one network show in particular, I've noticed the pretty blonde anchors and contributors, the blondes who gives soundbites in taped features as experts or spokespersons, the blondes in pop entertainment news or the young missing blondes in news stories.  Where I do regularly see black and Latino men?  In the local affiliate's newscasts.  Specifically, in surveillance tape footage that shows minority men committing crimes.  This irritates me.  I wondered if I'm the only viewer who notices how frequently we minorities are shown in the surveillance tape crime footage.

There is a conversation between Lou and the news director after he sells his first piece of news footage.  It's about how the local news is presented -- and it made me think of the local newscasts I've watched recently.  The subtext in this early newsroom payment scene is about causing fear and maintaining privilege.  Crimes against the "affluent" and "upscale" get the headlines and ratings.  Crimes against minorities in working class, non-affluent neighborhoods don't.  Lou Bloom represents a soullessness in the post-Network world of TV news.  We're now in the age of social media.

Jake Gyllenhaal really gives you some food for thought in this film.  His performance is compelling.  The more mentally unhinged Lou gets, the more money he makes.  His eyes are large but there's not really a connection in them.  He doesn't connect to people.  He doesn't care about people.  His charm can be creepy but he's good for business.  Gyllenhaal gives Bloom an unusual body language and rhythm.  There's something dissonant about it.

One thing that really hit me about Nightcrawler is that Lou Bloom, a crazy criminal and a young white guy, could charm his way into a corporate job -- working for a TV news operation --  move up and make top dollar.  He has power over a minority (his video partner) and a middle-aged woman (the news director).  And he influences the presentation of racial and class images on the TV station's newscast.  Louis Bloom is the privileged white male.

THAT was major.  Nightcrawler is worth your attention.  Rene Russo is perfect for the role.  She is one fine actress and this film shows her in top form.  She gives one of the best lead female performances I've seen in an American film this year. 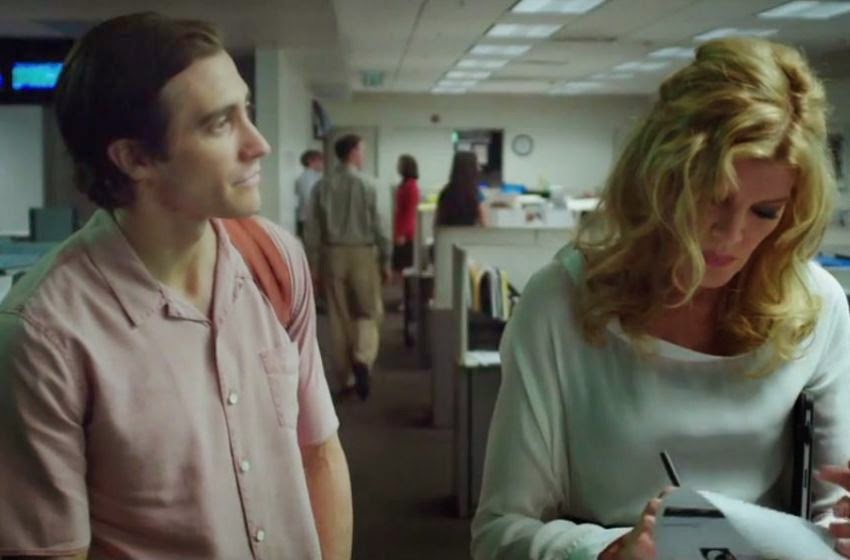 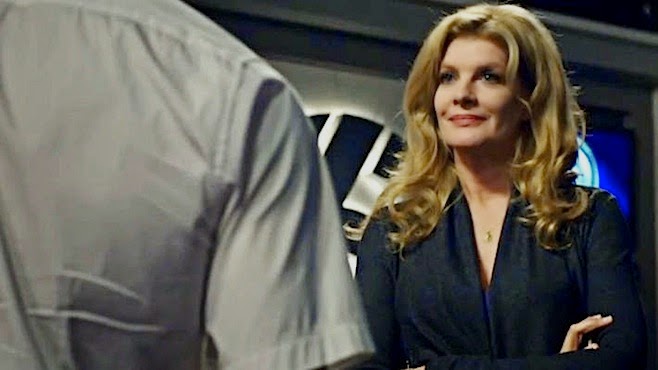 Lou is driven and mentally unstable.  Russo's character, Nina, is also driven.  Russo gives you the feeling Nina has worked for years in a male-dominated profession and was denied promotions she deserved merely because she's a woman.  She's unmarried and now a very middle-aged woman in youth obsessed L.A.  She needs her job.  Russo lets you underneath Nina's strong, intelligent exterior to show you why this woman would allow herself to be seduced by Bloom's graphic material.  TV journalism and the need for big ratings has become bloodsport.  Madness is money.  Madness proliferates.

There are two stand-out supporting performances in Nightcrawler.  One from Riz Ahmed  as the responsible, poor, constantly criticized Hispanic partner to Lou Bloom .... 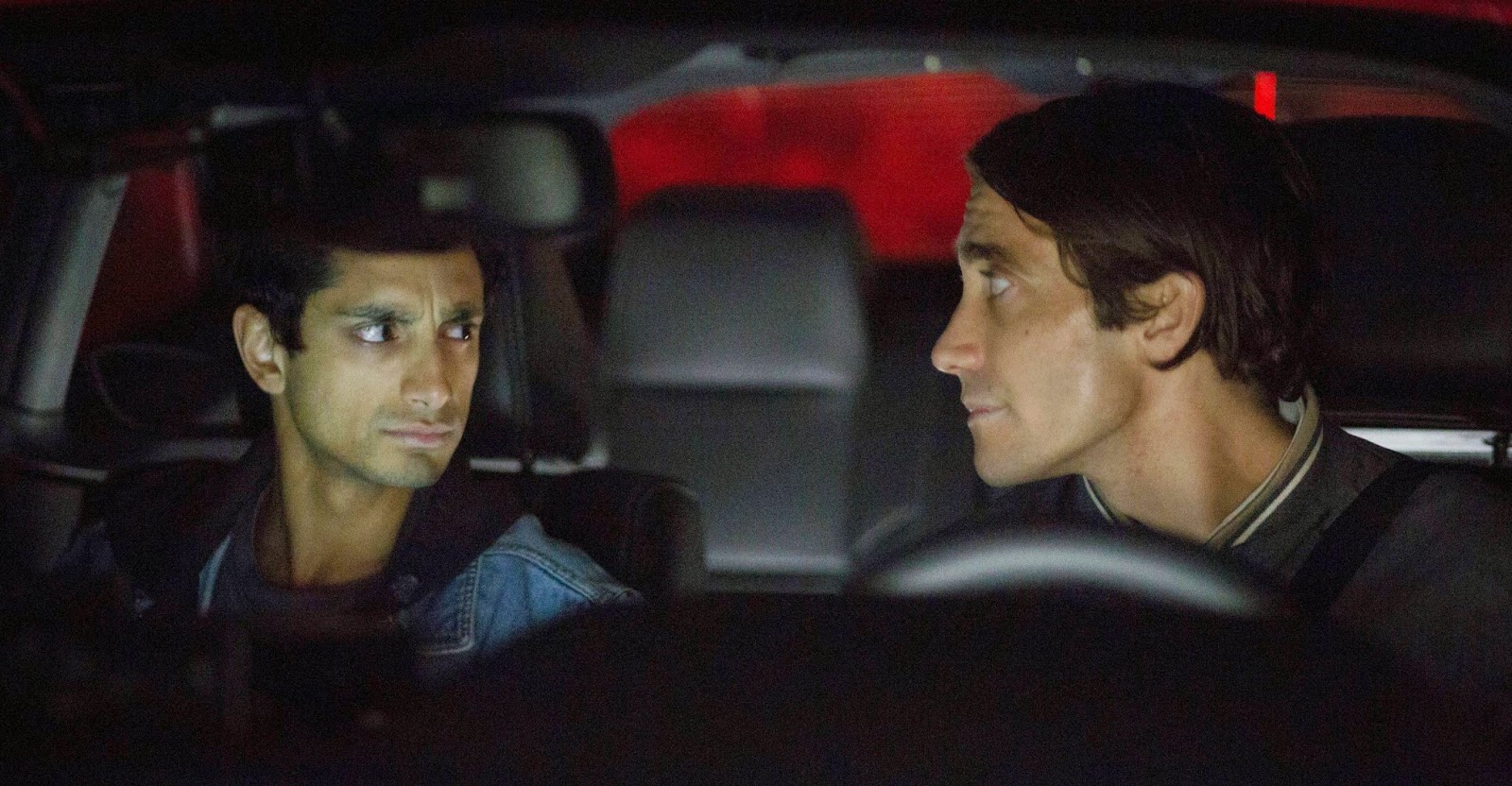 ...and Michael Hyatt (yes, her name is Michael) as the tough-as-nails detective on Bloom's case.  She has a hunch that his truth is fiction -- and it keeps killers on the street. If you're a Jake Gyllenhaal fan, Nightcrawler is a must-see movie.  He's quite good. 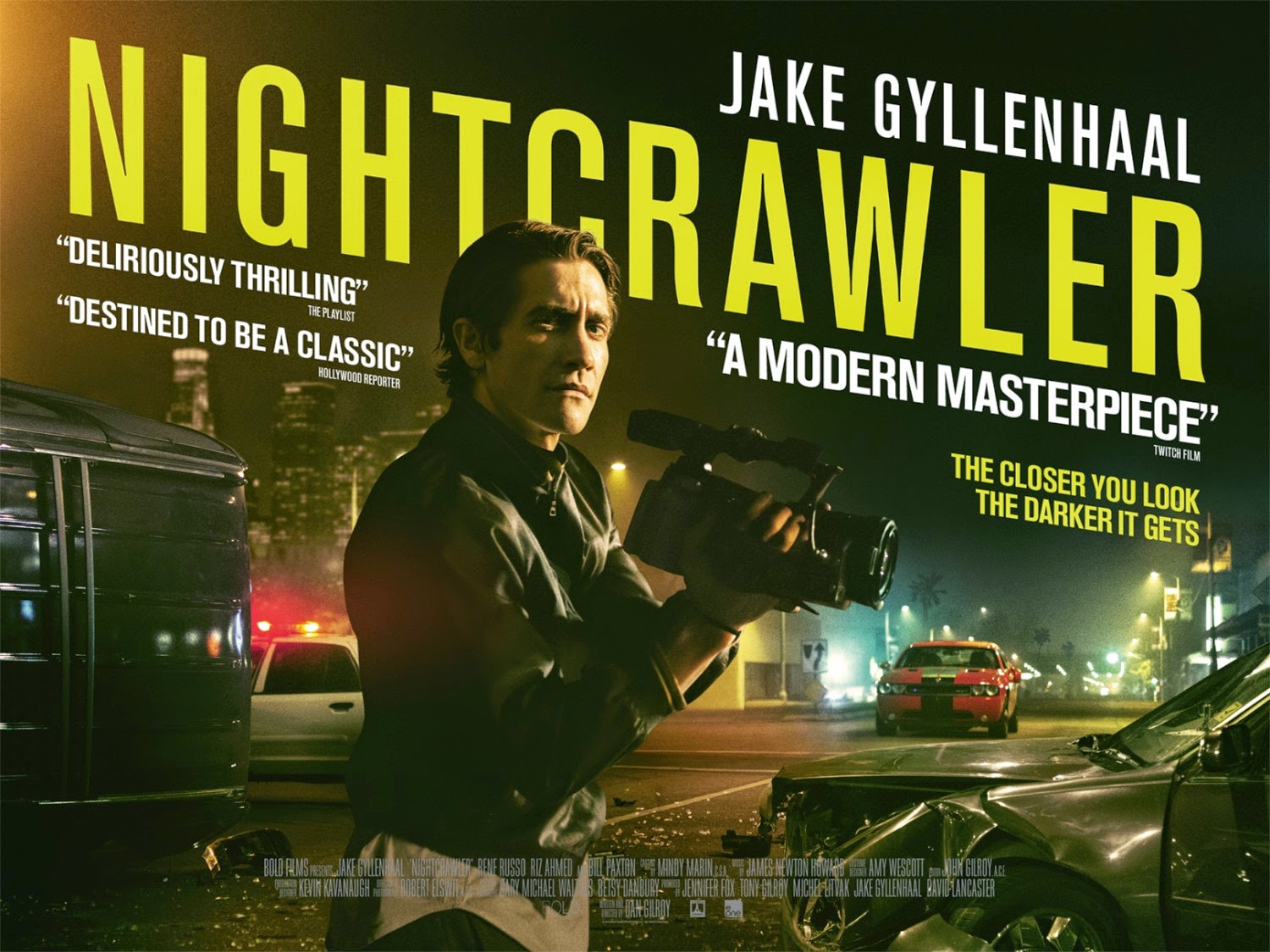 The film was smartly directed and written by Dan Gilroy.  He's married to Rene Russo.  I grew up in South Central L.A. and Gilroy accurately captures the attitude, atmosphere, look and styles of the Southland (what we Angelenos call Southern California).