Last night, film lovers were shocked to read the news that Top Gun and Beverly Hills Cop II director, Tony Scott, committed suicide.  Heaven hold him and heaven comfort loved ones now heartbroken because of losing him.  This will be a lead story in entertainment news because he directed movies that did big box office business.  He directed Denzel Washington in five films -- Crimson Tide, Man on Fire, Deja Vu, the remake of The Taking of Pelham 1 2 3 and another train-out-of-control thriller, 2010's Unstoppable.  A friend told me that the Associated Press referred to his 1983 film, The Hunger, as "a bomb."  I love that film.  You take those teen bloodsuckers in Twilight.  I'll take the sophisticated, mature, high fashion adult vampires in The Hunger.  Catherine Deneuve and David Bowie as old vampires who look fabulous and now live well in modern-day Manhattan, feeding at night on clueless hipsters hitting the club scene for sexy thrills. 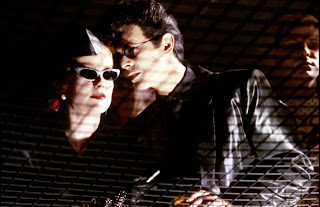 Miriam became a vampire in ancient Egypt.  Being a vampire means the look of eternal youth.  Blood is better than Botox. 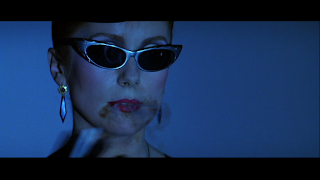 Miriam's lover starts to show his age, decay and die.  She's sweetly tired of him anyway. 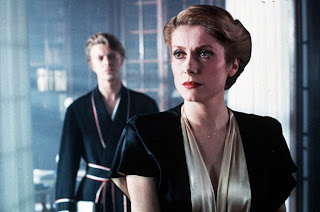 Before he dies, he visits a Manhattan doctor who specializes in pre-mature aging diseases.  I was fascinated with those diseases.  Especially that rare disorder some little kids had making them look old and wrinkled.  I can't remember what it's called but youngsters usually got to go to DisneyLand for free if they had it.  I remember that from local TV news feel-good features when I was a kid in L.A.  The disease had its perks. 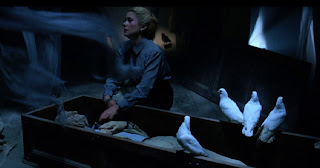 The doctor is played by Susan Sarandon.  The patient's story she heard is hard to believe but she's curious.  She meets Miriam.  Miriam desires her.  Miriam has the hunger.  This elegant, creepy vampire thriller becomes so...so Sappho-licious. 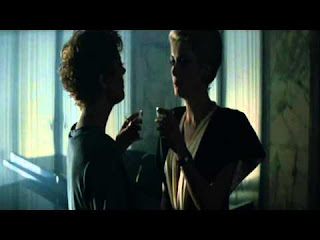 Amen, Ms. Rickey!  She's right.  Tony Scott was a master at that.  The art design of The Hunger seemed to reflect artwork from a very popular 1980s illustrator -- the late Patrick Nagel.  Remember seeing this style of artwork framed in friend's apartments and in New York publications like Interview? Or in advertising? Or on a Duran Duran album cover? 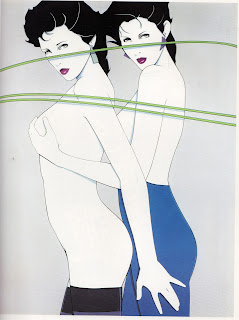 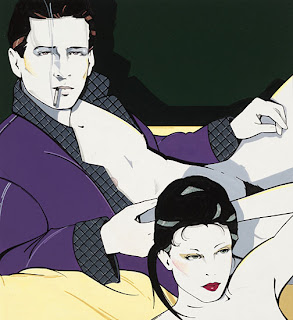 Tony Scott's eye candy visuals of The Hunger had a bit of the then-popular Patrick Nagel look.  It's a seductive and hypnotic film.  Scott's movie introduced me to the beauty of Delibes' opera, "Lakmé."  The Hunger has a different pace than the MTV rock/macho shirtless boys' club vibe of Top Gun.  I recommend renting it.  I hate that it was a called "a bomb" by the AP.  I hate the mentality that a film's worth is solely based on how it did in the weekend box office.  Adam Sandler's The Waterboy was a big box office hit.  It entertained millions.  Does that mean it's got more artistic merit than The Hunger?  Or It's A Wonderful Life?  Or The Night of the Hunter?  Or The Wizard of Oz in its initial 1939 release?  Or last year's The Artist?  They didn't do big box office like The Waterboy either.  Film is art.  Not just commerce or a fast food item like a new-fangled cheeseburger.  As a ticket buyer back in 1983, I was very satisfied with The Hunger, Scott's debut as a film director.  You could see that he had the gift.  Youth, beauty, wealth, long life, same-sex desire...and something about blood that transforms you.  This played on the big screen as we dealt with a new health crisis called AIDS.  What a movie.

It was sexy, stylish, smart -- and scary.  Before Twilight and HBO's True Blood, there was The Hunger.

I saw this movie in Milwaukee with my fabulous, funny lesbian friend, Janet.  I think the only way to experience this film is to see it for the first time with a fabulous, funny lesbian friend who really appreciates David Bowie, good lighting and great art design in movies.  I loved going to the movies with Janet.  In the seduction scene, the doctor notices a beautiful art object in Miriam's living room.  Miriam says, "It's over two thousand years old."  Janet leaned over to me in the theater and whispered, "I bet she bought it when it was new."  After all these years, I still giggle at that line because of what Janet said.

In my Milwaukee FM rock radio days of the late '70s, I once interviewed members of our city's avant-garde downtown local stage company, Theatre X.  One of its members moved to Manhattan to pursue acting work there.  He got a bit part in The Hunger as a guy in a phone booth.  Willem Dafoe, like the film's female stars -- Catherine Deneuve and Susan Sarandon -- would go on to future work that would make him an Oscar nominee.  One of his two nominations was for Shadow of the Vampire (2000).  It's about the stressful behind-the-scenes making of the classic 1922 vampire film, Nosferatu.