This is a blog piece about the memorable St. Patrick's Day I saw two show biz greats in person -- rock star Bruce Springsteen and TV star Lucille Ball.  This happened thanks to my job as a veejay and talk show host for VH1.  If any journalist would want to confirm whether or not "The Boss" and I were in the same location at the same time, just check the guest record for West Hollywood's Sunset Marquis Hotel on March 16th & 17th in 1989.  I don't mean to irritate the those of you who worship at the rock shine of Springsteen, but I flew back to Manhattan thinking that "The Boss" in the late '80s... ...could've taken a tip in the art of celebrity class from the lady who gave us Lucy Ricardo. 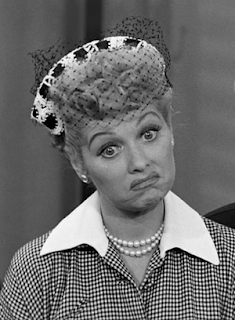 We veejays introduced Bruce Springsteen music videos frequently on VH1.  How many times did I mention that a then-unknown young actress named Courteney Cox played the audience fan he brings onstage to join him in the Dancing in the Dark video?  Countless!  A group of us from MTV and VH1 had to fly to New York to L.A. to tape interviews and for the network.  I was taping interviews for my prime time celebrity talk show, Watch Bobby Rivers.  The hotel was packed with TV and music industry folks that week. TV camera crews were set up by the pool and in rooms for interviews.

I arrived from my direct flight to L.A. and went to the hotel.  I'd stayed there before when shooting features for VH1.  The network had a corporate account with the hotel, somewhat of an entertainment industry lodge.  It was usually full of folks in the TV, music or film business who were there while doing business.  It wasn't like a Days Inn full of tourists.  I was acquainted with the very friendly and attentive front desk staff.  That day, the staff was apologetic when I arrived at the check-in desk.  The hotel was fully occupied and my reserved room was unavailable.  Why?  Because, as the hotel manager told me confidentially, Bruce Springsteen was still in the room way after his check-out time.  There were no other available rooms.  I left my luggage with the bellperson and took a walk, which is something residents rarely do in the good weather of Southern California.  I took a stroll in West Hollywood and killed time having coffee at a diner on Santa Monica Boulevard.  I walked back to Sunset Marquis about one hour later.  The manager was still apologetic.  He'd contacted Springsteen and told him what the situation was.  The rock star was still in the room.  I took another walk to kill more time while waiting for any room to become available.  I browsed in Book Soup bookstore and in Tower Records.  I went back to the Sunset Marquis at the end of a second hour without a room.  Now I'm tired from a work-related travel day to the West Coast that began early Eastern Daylight Time.  I had interviews to prepare. I needed a nap.  Bruce Springsteen and his companion were being relocated to a star-worthy suite that was becoming free.  I waited some more, inconvenienced by "The Boss."  The rock star was really white hot in those days. 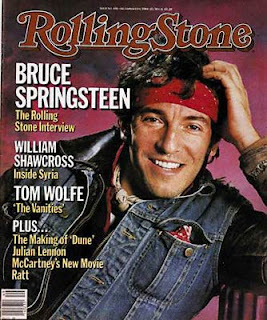 His songs told a story.  And they were shorter stories than Billy Joel's.  Some hailed Bruce as the rock Voice of the Working Class in the Age of Yuppies.  (Remember that word?) 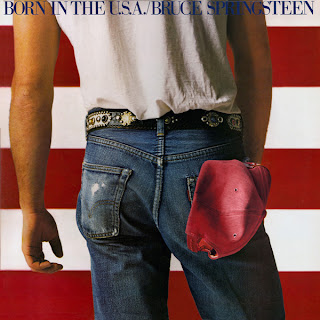 During the FM rock radio job I had in Milwaukee when I started my professional broadcast career and, years later, during my gig at VH1, I'd seen Springsteen in concert.  One thing I noticed at each show:  The only other black person I saw at a Springsteen concert was onstage playing back-up for Bruce.  And that was the late, great Clarence Clemons.  The audiences weren't racially mixed like for a Michael Jackson, Janet Jackson, Madonna or even a Bette Midler concert.  Did Bruce's music speak only to a specific part of Blue Collar America?  Were his tickets too expensive?  Did he notice the lack of racial diversity when looking at his audiences?  The Beatles did.  I know because I asked Paul McCartney in my VH1 interview about the lack of black teens in the audience when The Beatles played CBS' The Ed Sullivan Show in 1964.

I decided to see if being inconvenienced by Bruce Springsteen could benefit my veejay segments.  I wrote a short and courteous note on hotel stationery introducing myself and asking if I could interview him for 2-3 minutes by the pool for VH1.  I requested a couple of soundbites that I could use in my veejay segments.  I didn't need a long interview.  I just needed him to sit down, clip a microphone onto his shirt or jacket and tell me about his current album and upcoming projects.  Quick, simple, easy and for a network that promoted his product a lot.

I never got an apology for being put out of a room for over two hours. I never got a response to my polite request for a short interview.  The hotel manager said that he'd delivered my note to Mr. Springsteen personally.  The next day was a sunny St. Patrick's Day.  I'm having an early lunch outside on the hotel patio and -- a few tables away -- there's Springsteen with a companion.  I'm right in his eyeline.  I smile and nod.  No response.  But, he was wearing shades and perhaps he didn't see me.  Another hotel front desk clerk came over and asked me if I'd gotten lucky.  She asked if he was going to do a brief interview.  I answered, "No."  He hadn't responded at all.  She was surprised and said something along the lines of "Well...he knows who you are.  We pointed you out."  And I was the only black host on VH1.  I was easy to spot on the network.

A New York friend was also in L.A. that week for work.  He was staying with a relative.  The relative was comedian/actor Gary Morton, the second husband of Lucille Ball.  He gave me a number and told me to call him "at the house" on St. Patrick's Day.  Lucy answered the phone with that distinctive latter-day lower-register voice of hers. 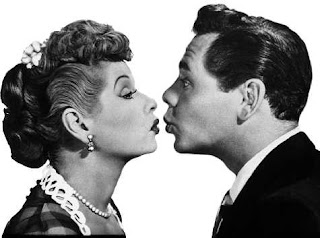 I was nervous.  I didn't need to be.  Not only was she very gracious on the phone, she complimented me on my work!  She'd seen my Watch Bobby Rivers interview show when Sally Field was my sole half-hour guest.  It gets better.  Then Lucille Ball -- a woman who was a Hollywood movie star before Bruce Springsteen and I were born to run...and an actress who became an even bigger star on TV thanks to her historic sitcom, I Love Lucy, co-starring her first husband, TV producer/actor Desi Arnaz -- invited me to come over to her house for cocktails at 6:00 that evening.  If I wasn't busy.  Of course, I went!  It was of the best St. Patrick's Day experiences this Catholic man ever had.  Lucille Ball and I laughed and talked over cocktails for nearly an hour.  Gary Morton came downstairs and joined us.  I could not believe my luck and her generosity.  My buddy, Gary's nephew, was there and watched all this.  I am still so grateful to him.  As I prepared to leave, Lucy and Gary were about to sit down to pork chops for dinner and watch Wheel of Fortune.  "I'd ask you to stay," she said, "but we've only got two pork chops."  She told me she was going to be in New York in April and, perhaps, we could have dinner then.  Wow.  From Bruce Springsteen I only wanted 2 or 3 minutes.  TV legend Lucille Ball gave me more. 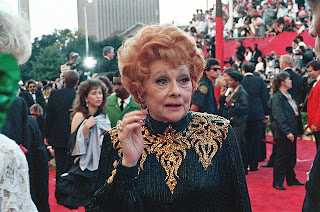 Unfortunately, she passed away before making it to New York.  We lost Lucy on April 26, 1989.  I'll never, ever forget that St. Patrick's Day at Lucy's house.  She had balanced international movie and television stardom with working class sensibilities.  When I arrived at her house, she'd been answering fan mail.  She continued to be grateful to her fans.  She appreciated that I knew things about her early films -- like the 1942 drama., The Big Street.  If she'd ever gotten an Oscar nomination for a film, it should've been for her tough-as-nails nightclub entertainer who winds up crippled and cared for by a low-income restaurant worker ( played by Henry Fonda).  Her last scene in it makes me cry. 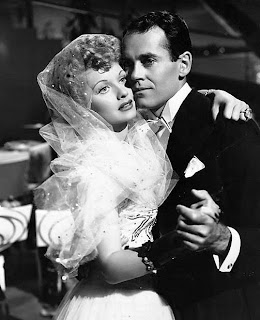 Bruce Springsteen became a major show biz humanitarian through the years.  I simply cannot carry a grudge at a star who has used his fame to help so many who were down and out.  And he got something Lucille Ball never did -- an Oscar nomination.  His "Streets of Philadelphia" for the AIDS-related drama, Philadelphia, won the Oscar for Best Song of 1993.  Both stars added Kennedy Center Honors to their accomplishments.

I grew up the son of working class African-American parents in South Central L.A.  I was a child of the Civil Rights era.  We lived in the curfew area during the Watts Riots of the 1960s.  After my parents divorced, Mom, a registered nurse, was a single working mother of three.  She refused alimony and child support checks, unfortunately, did not come regularly from Dad.  I studied hard in school.  I worked and eventually was able to help her pay the bills.  We moved to the Midwest.  In good times and when times were bad, who could always put a smile on our faces?  Lucille Ball as Lucy Ricardo.  As we had drinks, Lucy said "People need a good laugh as much as they need a good doctor."  I grew up watching her and being inspired by her and by Desi Arnaz when I chose to seek work on TV as my profession, regardless of how difficult the journey could be.  Kids from my old L.A. neighborhood weren't supposed to get national TV talk shows in New York City with A-list celebrities.  One day in 1989, the rocker who was called the Balladeer for Blue Collar America was the one who was so close and yet so far.  The iconic movie & TV star who lived in a big house in Beverly Hills was the one whose kindness and attention touched my working class heart.  That's why, to this day, I love Lucy. 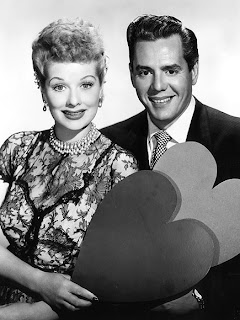