In March, I blogged about the excellent and exciting actress, Diana Sands.  The late Ms. Sands had talent, wit, charisma and spirit.  Had she lived, I would not have been surprised at all if she was the first African-American woman to win the Best Actress Academy Award and the first to have more than one Oscar nomination to her credit. 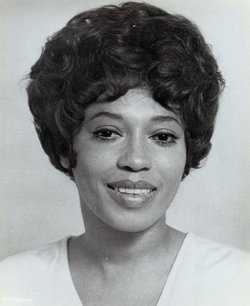 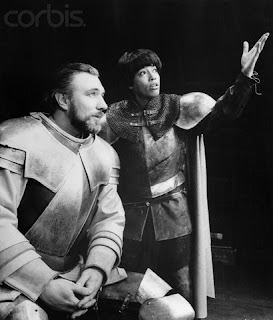 be stereotyped and broke down a barrier in the casting of ethnic actresses.  Joining actor Philip Bosco, she was the first black woman to play Shaw's Saint Joan on Broadway.  Some folks were screaming as the barrier fell on them in the mid-1960s when Diana Sands won the role of Doris, the exasperating hooker in the new Broadway comedy, The Owl and the Pussycat.  A new actor named Alan Alda played Doris' neighbor, a bookstore clerk. This followed her work in the breakthrough hit play, A Raisin in the Sun. He wants folks to think he's an intellectual author whose writing genius has yet to be appreciated.  He's never been published.  She sees herself as a model and an actress.  Bill Manhoff's 2-character play was not written with Doris as a black woman.  Sands was cast on her talent.  Not her color.  The 1970 film adaptation was tailored to fit the talents of Funny Girl Oscar winner, Barbra Streisand. 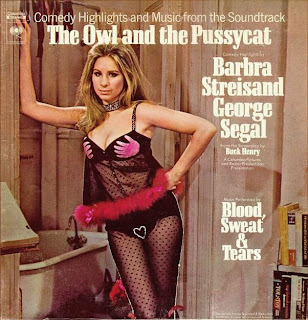 (I love Doris' work attire in the movie.)  A two-time Tony Award nominee, Diana Sands joined Sidney Poitier and Ruby Dee as an original Broadway castmember who recreated her role in the 1961 film version of Lorraine Hansberry's A Raisin in the Sun. 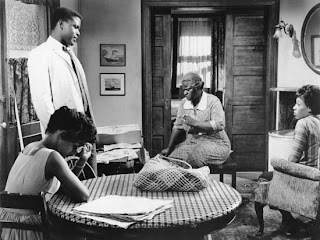 Seen on the far right of the above pic, Sands played the intellectual sister to Sidney's character.  When I was a youngster, this is where I first discovered Diana Sands.  I was watching A Raisin in the Sun with Mom and Dad.  When Sands was in a scene, she had "that little something extra" that James Mason as Norman Maine talks about in Cukor's A Star Is Born.  He's explaining what star quality is.  To me, Diana Sands had that charisma.  I also watched her on TV as Cousin Sara in the groundbreaking NBC sitcom, Julia, starring Diahann Carroll. 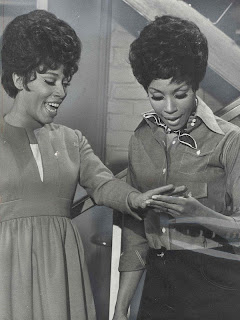 Sands (on the left) reminded me of every cool black woman who was one of Mom's friends, a neighbor, a school teacher of mine or any other member of our community.  She was fabulous.  I highly  recommend you rent the 1970 Hal Ashby satire that is now available on DVD.  Other films that Ashby directed -- Harold and Maude, The Last Detail with Jack Nicholson, Shampoo, Coming Home with its Oscar winning performances by Jane Fonda and Jon Voight and Being There -- get more attention.  But this movie, the first one Hal Ashby directed, is quite good and deserves your attention.  One of its highlights is the luminous performance by Diana Sands as Francine.  Wow. 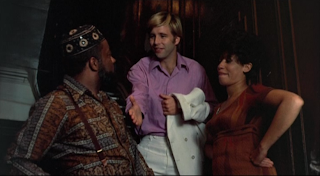 It's the kind of part Barbara Stanwyck would've had in a late 1930s/early '40s film.  Francine is a working class woman trying to make ends meet in an economically depressed section of Brooklyn.  Young Beau Bridges plays the upscale, privileged new landlord of her building.  He's the Caucasian face of gentrification.  He'll fix the place up and force the folks out when he raises the rent.  He's totally clueless to racial matters yet he sees himself as liberal.  Francine is ambitious.  She has a plan.  Like a classic Stanwyck character, she's often the smartest one in the room and the dame who can pull a  fast one over on the guys running things but she may ultimately be fooling herself too. 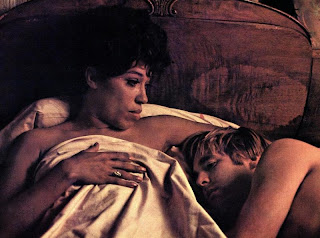 Lee Grant played the landlord's rich mother.  She was a Best Supporting Actress nominee for this film and deserved her nomination.  The scene where she visits and unexpectedly gets high with the building's gun-totin' tenant played by Pearl Bailey is a hoot.  But now when I look at this movie, I gasp at how good Diana Sands is.  She should have also been in that Oscar category for Best Supporting Actress of 1970. 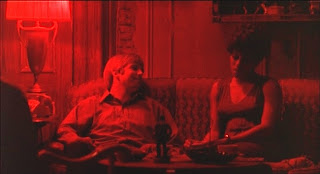 A beautiful performance and a damn good script.  The Best Supporting Actress Oscar winner for 1970 was Helen Hayes as the cute old lady who scams her way to free flights in Airport.  After you see The Landlord, see another Oscar-winning performance.  Patricia Neal took Best Actress of 1963 for her turn as the world-weary, hard-working, wise housekeeper in Hud.  Paul Newman starred as Hud.  As the only woman in the story and the only woman in a ranch house of men, Alma seems to be the only woman in town who is on to Hud's self-absorbed macho stud lover bullshit. 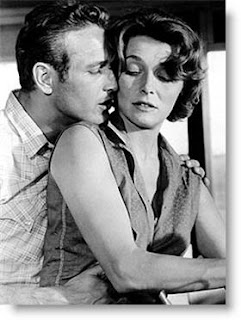 This ain't Alma's first time at the rodeo.  She knows men.  She likes men.  She loves herself more.  She knows how to take triflin' men down a peg.  She's the only woman who can throw Hud off his game.  They crack each other's tough exteriors.

It's not a large role but it's a juicy one.  Hud was directed by Martin Ritt, the man who also directed Sounder, The Great White Hope, Norma Rae and the racially/sexually progressive Paris Blues (1961).   Did Patricia Neal deserve that Oscar?  Absolutely!  Hollywood studios were still timid on interracial casting in the early 1960s.  In the Larry McMurty novel, Alma -- the housekeeper for the Hud household -- is a black woman.  If Paramount Pictures had been really progressive when letting Martin Ritt direct this classic film, Diana Sands would have been BRILLIANT as Alma.

Sands was set for the lead role in Claudine when she was stricken with cancer.  She suggested that her friend Diahann Carroll take over the role.  Carroll did and she earned an Oscar nomination for Best Actress of 1974 thanks to Claudine.  Diana Sands passed away in 1973 at age 39.  She was a superb actress.