Every ten years, the British Film Institute's Sight & Sound magazine conducts an international film critics' poll for a list of the 10 Best Films.  Since this poll started in the early 1960s, the same film took the top spot.  The 2012 list was published and a San Francisco police detective with a fear of heights replaced the newspaper magnate called Citizen Kane.  Yes, the 1941 Orson Welles classic is now in second place.  In the top spot is Alfred Hitchcock's Vertigo -- another Hitchcock film to have James Stewart as a character in peril dangling from the outside of a building and the first Hitchcock film to incorporate color animation in a sequence with live action.  It's visually rich and hypnotic. 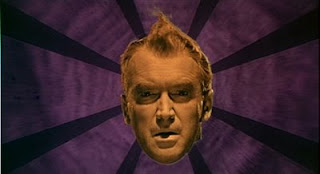 The list kept classic film fans and bloggers busy in online debates.  I totally dig Vertigo.  Like Citizen Kane, it's a work that wasn't fully appreciated when initially released here.  The French loved Hitchcock's 1958 film.  In time, his tale of obsession became a classic.  I discover new things when I see it again.  If you've seen Vertigo, here's an example:  There's a strong floral motif in Hitchcock's picture with the Kim Novak character. 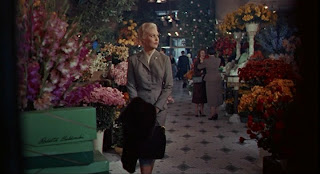 Stewart is the detective John "Scottie" Ferguson.  Flowers will become an element in the big picture of his obsession.  Novak's "Madeleine" has a bouquet with her when she 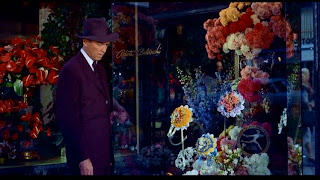 gazes at a portrait in the art museum.  The woman in the painting, Carlotta, is holding a bouquet.  Carlotta and an animated bouquet will appear in Scottie's revealing nightmare. 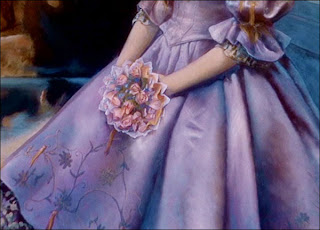 Madeleine is picking petals from a bouquet of flowers and tossing them into the water shortly before she plunges into the San Francisco bay.  What possesses her? 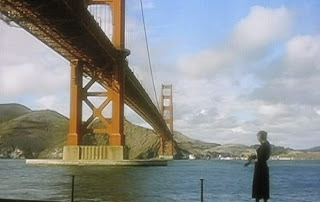 Vertigo is one of those old Paramount releases aired on NBC's Saturday Night at the Movies when I was a kid.  Then legalities took the classic off the market for years.  Eventually it was restored to us and, for a time, re-released in special theatrical engagements.  I saw it at the Ziegfeld Theater when I lived in New York City.  On the big screen, I noticed something I'd not noticed before -- when the "new" Madeleine emerges from her hotel room bathroom for Scottie's approval, his erotic/romantic obsession is now shouting "Boy, Howdy!"  In the art direction, Hitchcock continues the floral motif in a cheap painting above the bed and on the bedspread.  Hitchcock's inspired literature of film. 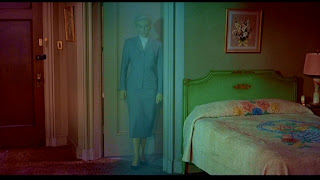 It adds to the sexual tension of the scene.  Fashion stylists should be urged to watch this classic.  Vertigo is a perfect example of what happens when good beauty makeovers go bad.  That scene gets me every time.  It's sort of Frankenstein meets Elizabeth Arden.  Up for some weekend fun?  If you like to have a responsible drink every once in a while and you have a couple of Hitchcock fan friends who do too, invite them over to play my Vertigo Drinking Game.  Get some food and drink, rent Vertigo and do a little shot of something every time you see person or a figure of a person falling in the movie.  This includes the partially animated nightmare sequence.  Be prepared.  The falls begin soon after the opening credits.  Stewart dangled previously in Hitchcock's Rear Window. 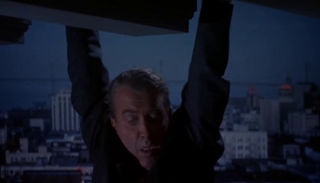 Make sure no one has to drive home when the movie is over.  Citizen Kane and Vertigo have a few things in common.  The director of each classic appears in his film. 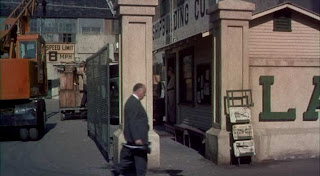 Both films have an original music score composed by Bernard Herrmann. 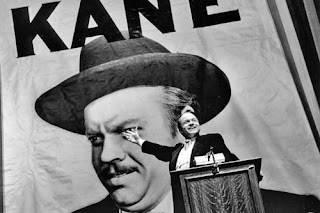 Both films focus on a middle-aged man who becomes romantically obsessed with a lovely young blonde and proceeds to buy her things.  Heartbreak ensues. 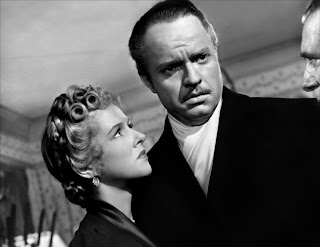 If, after you finish watching Vertigo and playing my Vertigo Drinking Game, there's still some more food left and your friends feel like seeing one more movie, I recommend making it a theme double feature.  Have some giggles with Mel Brooks' Hitchcock parody, High Anxiety.  The brilliant Madeline Kahn co-stars as Mel's Hitchcock Blonde. 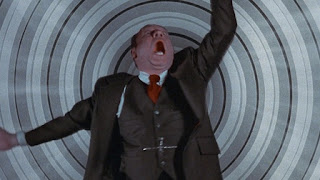 Oh.  And it's another movie in which the director appears in his own film.  Enjoy.