Just as Barbara Stanwyck excelled at showing us light and dark variations on the ambitious woman (Stella Dallas, The Lady Eve, Double Indemnity and The Furies), Marilyn Monroe was a then-unappreciated pro at showing us light and dark variations on the all-American showgirl.  Lorelei Lee may not know at first that a diamond-studded tiara goes on your head and not around your neck, but she knows how to get one.  Monroe's Lorelei in the film version of Broadway's Gentlemen Prefer Blondes is one of the best musical comedy performances in a 1950s Hollywood film. Her "Diamonds Are a Girl's Best Friend" number is a jazzy knockout.  I dig her velvety singing voice. 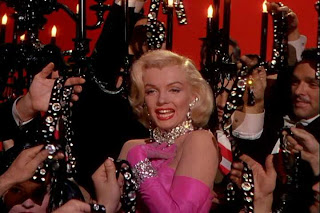 Lorelei is a talented showgirl, a loyal friend and dumb-like-a-fox.  Ultimately she knows exactly what she's doing on and off the stage.  Not like Cherie, the totally clueless hillbilly chanteuse in Bus Stop whose off-key rendition of "That Old Black Magic" would make Van Gogh want to cut off his other ear.

And there's Sugar Kane in Billy Wilder's classic comedy, Some Like It Hot.  She sips bourbon to sooth a breaking heart.  She's the singer with an all-girl band who's tired of always getting "the fuzzy end of the lollipop."  She wants to marry a millionaire.  What Sugar wants more than money or a diamond bracelet "worth its weight in gold" is true love.  If Jessica Lange got an Oscar for Tootsie, Marilyn Monroe should have, at least, been an Oscar nominee for Some Like It Hot.  She was a great screen comedienne. 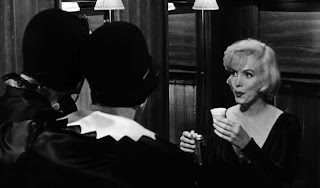 Sugar's sweetness makes a love 'em-and-leave 'em guy in a dress want to be a better man.  Try to imagine this movie working without Monroe's presence.  Try to imagine anyone else doing Monroe's part.  As a 20th Century Fox contract player, after 1953's deluxe Gentlemen Prefer Blondes and right before her star power went white hot with Billy Wilder's 1955 The Seven Year Itch, she played another showgirl in a big budget, everything but the kitchen sink, wide-screen musical.  She was Vicky, the ambitious showgirl who is so sexy and shapely that, apparently, she could spell "doom" for a famed Irish Catholic show biz family act called The Five Donahues.  This 1954 feature is There's No Business Like Show Business -- stuffed with the Irving Berlin songbook.  Marilyn is at her best in the musical numbers -- like "After You Get What You Want." 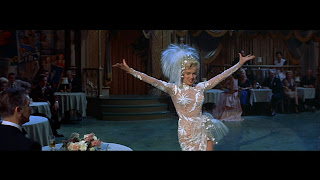 It's interesting to watch her attempt to make something of this thankless role.  Vicky works as a a hat-check girl.  She wants to be a singer.  She can sing.  She gets coaching.  She has an agent.  But she draws comments that would make you think she's the Hoochie Mama of Manhattan.  Most of those pointed comments come from the star of the movie.  Someone at Fox came up with this idea:  "Hey! Let's put Marilyn opposite Ethel Merman!"  Marilyn Monroe, who mastered the breathy, kittenish, slightly-above-a-whisper voice so well-suited for the intimacy of movie cameras...opposite the Queen of Broadway whose singing voice could've been used as a New York City car alarm.  Perfect. 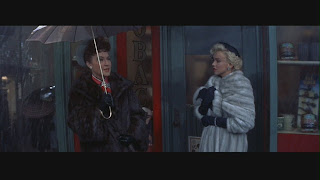 They're an odd couple but interesting to watch now because of entertainment history.  "The Merm" was a Broadway legend by then.  Monroe was a newcomer, on her way to becoming a Hollywood legend.  In a way, it's as if Monroe's Miss Casswell in All About Eve got a supporting role in a Broadway play opposite Margo Channing.  Ethel Merman and Dan Dailey star as the vaudeville headliners.  Molly and Terry Donahue had kids and made the kids part of the act.  They're played by Donald O'Connor, Mitzi Gaynor and 50's recording star, Johnnie Ray.  Mitzi is a trouper like Mom.  Donald is the hotshot son who likes to party.  Johnnie is the sensitive brother who often disappears at night.  No one knows where he goes.  The Five Donahues all sing and dance.  A lot.  I think the "Alexander's Ragtime Band" number is the first half-hour of the movie.  Vicky is the love interest for Tim (O'Connor).  The minute he sees her...Hubba! Hubba! Hubba!  But Mom starts acting as if Vicky's cleavage alone is a Communist threat to all that is sacred in America.   Tim falls for Vicky and Vicky starts to get somewhere in her career.  Mom hates this.  To make matters worse, The Five Donahues and Vicky wind up on the same bill in a nightclub booking.  If Molly didn't think Vicky was a Hootchie Mama before, she certainly does now when she sees her pelvic thrusting in the "Heat Wave" number. 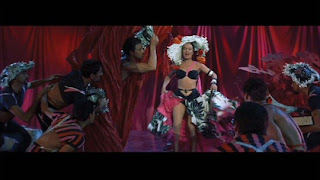 Feeling that Marilyn looked good in anything, Travilla used the title from a 1952 film she appeared in with  Barbara Stanwyck as his theme for the color combination when he designed her costume for the "Heat Wave" number:  Clash By Night. 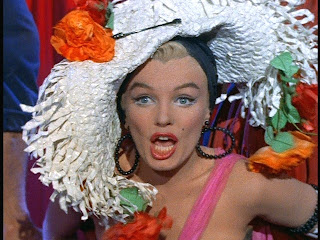 Offstage, Vicky's respectable. She's not a gold digger.  But Molly and Terry are Old School.  In some of the few minutes when the stars are not belting out Berlin tunes, Steve (Johnnie Ray) tells his parents where he's been going at night.  To church.  Steve Donahue wants to become a priest.  He might as well have said, "I'm gay, I'm a drag queen and I'm in love with a black man."  Because that's how his parents take the news.  His Catholic parents.  Life is destroying their Broadway act.  First a hot blonde.  Now the Vatican.  If you feel like you've seen this kind of story before, you have.  Fox basically made an early Mickey Rooney/Judy Garland MGM musical.  Merman's was a Sophie Tucker role, Dan Dailey had the Charles Winninger role, Mitzi Gaynor was the Judy Garland character, Donald O'Connor did Mickey Rooney's and Marilyn was a young Lana Turner type -- like in Ziegfeld Girl.  (Johnnie Ray was Douglas McPhail, the actor who sang the Babes in Arms title tune with Mickey and Judy in that musical.)  Molly remains cold to Vicky.  She won't cut Vicky any slack even after the attack on Pearl Harbor.  She blames that on Vicky too.  Brash Tim quarrels with dad and disappears.  No one can find him.  Not even the cops.  Molly cries as we're dragged down Donahue family memory lane with yet another musical montage.  We're down to the last ten minutes and the writers forgot to give any business to Mitzi Gaynor.  So they wrote a short scene with daughter Katy ending the big chill between Molly and Vicky backstage at a benefit. 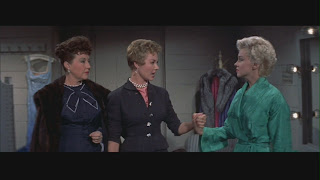 Merman again sports a full-lenth mink coat made from animals she trapped herself.  Monroe manages to inject charm into this role and she had a nice chemistry with O'Connor, a talent who deserved more A-list musicals than he got.  We're close to the big finish.  Merman will belt the title tune, a song she introduced on Broadway in Annie Get Your Gun.  Runaway Tim will reappear.  He's secretly joined the Navy to learn humility.  Besides, serving in WWII would be quieter than being around his mother.  Vicky loves him.  She never was a Hootchie Mama after all.  That means...she can be in the finale.  Good thing too.  Katy's in red, Molly's in white.  Vicky's in blue and it balances out the USA theme.  The Five Donahues have been reunited onstage.  Plus one. 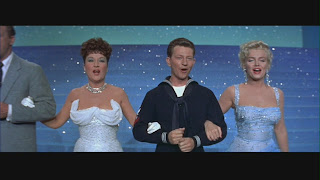 In the 1940s, Universal could have made five Donald O'Connor musicals with the budget for this one number alone.  Early in the story, we had two Catholic parents freak out when their son wanted to become a priest instead of procreating and supplying them with grandkids.  Now we get a finale that makes a gay pride parade in West Hollywood look like the chain gang in Cool Hand Luke.  Merman, Marilyn, Mitzi, a rousing showtune, dozens of chorus dancers in pastels and men in uniform.  Oh, Sweet Baby Jesus. 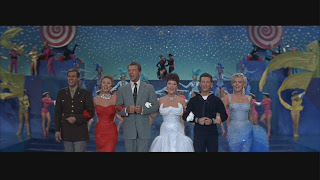 The only thing missing from this closing number is a nativity scene with live animals.  With a flimsy role, all that business going on and Ethel Merman, Marilyn still shines through.  Your eye goes to her.  That's star quality.  There's No Business Like Show Business is a musical that shouldn't work, but it does.  Monroe and Merman -- what an odd couple!

You can see all four of those Marilyn Monroe movies on TCM.  Thanks to Sittin' on a Backyard Fence for lettin' me be a part of the 2012 TCM Summer Under the Stars Blogathon. 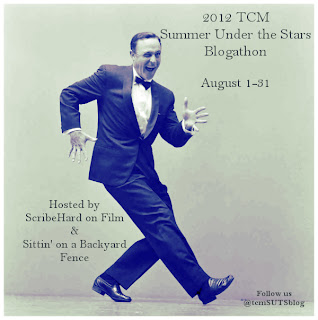