Let's take a "bromance" look at Johnny Eager.  The early 1940s crime drama starred Robert Taylor as the ruthless gangster, Lana Turner as the girl who captures his heart, and Van Heflin as his alcoholic best friend and often-ignored voice of reason.  Luscious Lana was a big new star when she illuminated screens as Johnny's romantic interest. 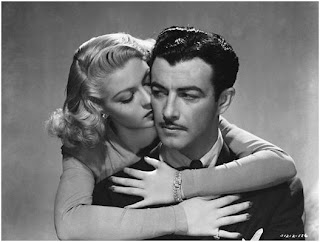 There's another heart in this gangster story to notice.  Society girl Liz (Lana Turner) loves Johnny.  She's excited by his macho mixture of class with a tough touch of the gutter. 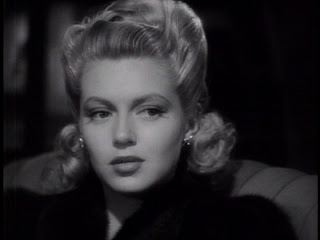 Jeff (Van Heflin) loves Johnny too.  He believes the gangster can rise above that touch of the gutter.  Johnny knows how Jeff feels and, in his way, the criminal loves him too.  Jeff is like a boozed up, one-man Greek chorus telling Eager to beware of what his deeds can do to his destiny.  This won Heflin the Oscar for Best Supporting Actor of 1942. 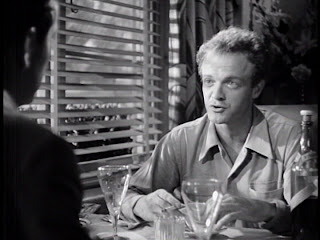 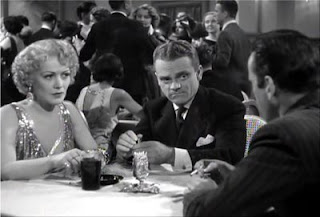 If you haven't seen it, I'm not going to reveal the ending.  If you have seen The Roaring Twenties, think of its last scene when you get to the ending of Johnny Eager.  There's a similiarity.  Both films, products of rival Hollywood studios, had the song "Melancholy Baby" as a main musical theme.  About six years ago, an executive at Logo TV asked me if I could suggest a few films for the channel  to air during Gay Pride month.  He wanted movies that folks didn't usually include when discussing gay images on film.  He added that he was open to showing some classics.  I pitched The Maltese Falcon and The Lady from Shanghai.  Gay male characters can be vital in crime dramas and film noir.  In those stories, you have to know that the lead man -- especially if he's the hero -- has a straight shot at getting the damsel in distress who ultimately may turn out to be a duplicitous dame.  That will give a double-cross a bigger pay-off for the audience.  Think of the twist in Polanski's film noir-in-color, Chinatown.  There was a major double cross in that one.  A double-Noah Cross.  In the 1940s days of the Hollywood production code,  director John Huston lets us know the crooks played by Peter Lorre (as Joel Cairo) and Sydney Greenstreet (as corpulent Kasper Gutman) are dangerous but not hetero. 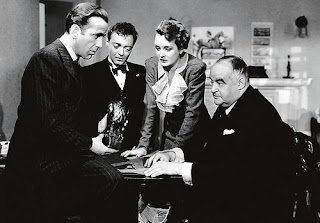 If they were hetero, private eye Sam Spade (Humphrey Bogart) and the moviegoer could suspect that Brigid (Mary Astor) laid one or both of them to get what she wants.  The gay hoods raise no sexual suspicions about the leading female.  Orson Welles played a sailor who falls for a married woman we call The Lady from Shangai.  How are we sure he's got a direct route to her?  Look at the men in her life.  Mrs. Bannister (a blonde Rita Hayworth) has a husband who is older, physically infirm and not exactly handsome. 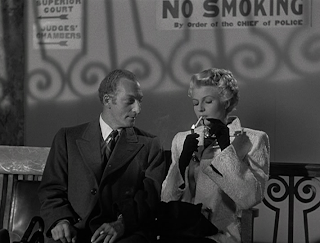 Could she be doing the grand horizontal on the down-low with her husband's big beefcake business partner?  Not likely.  Grisby is built like a quarterback.  But every time he opens his mouth to speak, confetti and pearls pop out. 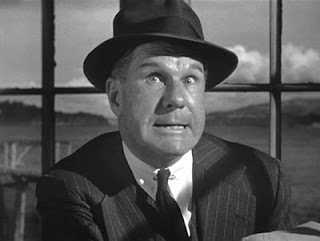 He raises no sexual suspicions about Mrs. Bannister.  The sailor feels he's free to launch himself at her lips like a torpedo.  He's got no competition. 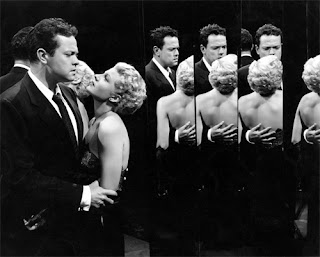 In this period of film-making, heterosexually-challenged male characters were not called "gay."  They were more gay-implied via skills of the director, screenwriter and actor.  Think of the musical trill and Spade's facial reaction in The Maltese Falcon when he sniffs the handkerchief he finds in Joel Cairo's wallet.  If that trill was a color, it would be lavender.  A way of making a gay male character "acceptable" within the margins of the old Hollywood production code was to substitute the orientation with liquor.  In Billy Wilder's The Lost Weekend, the alcoholic writer had a girlfriend.  He had a same-sex attraction in the book.  The "bromance" of constantly hungover Jeff and the gangster works in Johnny Eager.  Jeff is like Johnny's personal assistant.  He knows all the babes who think they're "the real thing" in Johnny's life.  To Johnny, they're just cute squeak toys who start to squeak too much.  Jeff helps with the busted toys. 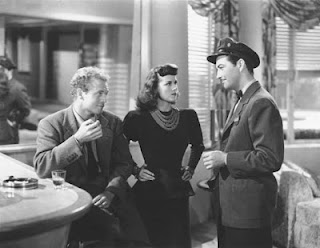 Jeff knows that Liz is different.  She's class.  Class attracted to a bad boy.  Her love could redeem Johnny.  She's also the District Attorney's daughter.  Johnny, out on parole, has fooled the town into thinking he's changed his ways.  He's still working every angle.  He loves Liz, but she's the D.A.'s daughter.  He could play that romance to gain even more power.  Will he use that angle? 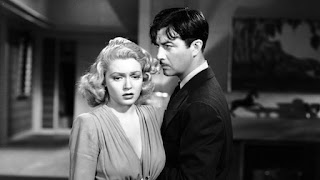 The only guy Johnny would trust with his gorgeous girlfriend is Jeff. Of course.  The straight sexy gangster would wisely and absolutely trust a gay male friend to be with his hot babe sweetheart.  Taylor is very good as a true rat who has a chance at redemption.  Turner was always fine as a good girl seduced by the sensual thrill of being bad.  Heflin earned that Oscar.  The heartbreak and care is all in his eyes and his slowed body language.  It's an odd pairing.  He's an intellectual drunk with a uneducated, street smart thug.  Heflin plays Jeff as a guy emotionally afflicted with a gentle unrequited love, a guy who longs for a reason to stop drinking.  Van Heflin was a stage actor.  James Stewart won the Best Actor Academy Award for doing the role onscreen that Heflin originated opposite Katharine Hepburn on Broadway in The Philadelphia Story. 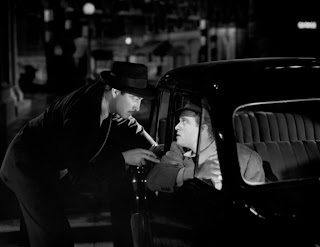 Besides Robert Taylor, Lana Turner, Van Heflin and Edward Arnold, there's another star in the Johnny Eager company.  Cinematographer Harold Rosson.  The final confrontation with its use of light and darkness and shadow is absolutely sensational.  It's a master class in lighting.  Once again, if you've seen James Cagney and Gladys George in The Roaring Twenties, watch Robert Taylor and Van Heflin in Johnny Eager.  Let me know what you think.  By the way, Logo TV didn't go with any of my recommendations.  They went with The Adventures of Priscilla, Queen of the Desert.
at May 29, 2012