My TV Show: "And Bob's Your Uncle"

I never thought that, one weekday afternoon, I'd be saying to four talkative grade schoolers "Uncle Bobby's trying to watch Funny Girl."  That is indeed what happened here in the suburbs on the birthday of Barbra Streisand. 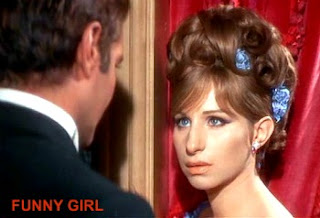 To salute the star who's won just about every showbiz honor except for the BET Soul Train Award, Turner Classic Movies was airing Funny Girl.  Here on the West Coast, it started at 5:00pm.  Just about the time when my two very cool little nephews, ages 9 and 11, invited their two neighborhood friends and  classmates over to play.  The two friends are brother and sister.  The four of them make Nerf gun action movies with their FlipCams.  She's a real trouper who never gets to be the hero or the director.  I tell the three guys she deserves equal treatment.  Just a few seconds before Streisand as Fanny Brice breaks out into the film's first number, the kids charged into the family room with "Hi, Uncle Bobby," "Hi, Uncle Bobby, "Hi, Uncle Bobby," "Hi, Uncle Bobby."  Yep.  Even the two who aren't related to me.  That's how long I've been here.  I was thinking back to the last time I saw Funny Girl on the big screen.  It played in a special engagement at the Ziegfeld Theater in New York City in the summer of 2001 to a packed audience of hardcore fans.  But this wasn't the Ziegfeld. 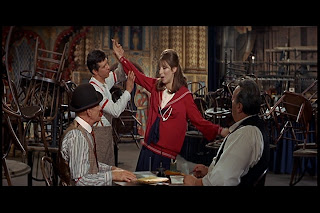 No one else wants juice. He goes downstairs to the kitchen.  The kids are quiet for a few minutes and I actually get to hear some of "I'm The Greatest Star." 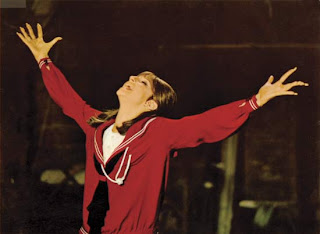 Nephews:     (Older One)  "Is she old and wrinkled now 'cuz she has a birthday coming up?"  (Younger One begins softly singing "Happy Birthday.")

Nephews:     (Younger One singing)  "Barbra Streisand...Happy Birthday to you."

This is my life in the Sacramento suburbs right now.  It is so not New York.  I've been here six months and not once has the name Elaine Stritch come up in conversation.  I miss my New York.  My New York where I frequented a Greek-owned diner that had a Mexican chef who made some of the best Italian food in the neighborhood.  I'm working on TV show idea:  Bob is single and a 40-something TV performer in New York City.  He's more a working class broadcaster than a rich TV type like a Matt Lauer or Rosie O'Donnell.  His TV career started in conservative Milwaukee in the 1980s.  That same decade, he got a job in New York.  That became his new home for over 20 years.  He's got a mother in Milwaukee and a married sibling with kids.  Bob's helped them both financially.  He lived pretty modestly in Manhattan.  Bob lost his partner to illness in the 1990s.  Romantically, he's had no luck since.  He describes online dating for middle-aged gay men with a quote from the movie Apocalypse Now: "The horror...the horror." He feels that he took better care of his partner and relatives than he did of himself.  His mother lives with the married sibling.  Bob's got no agent.  He's on a show that gets cancelled.  The Recession hits him hard. He can't find any kind of new work.  He's flat broke and loses his apartment.  All his luck in New York City, the city he loves, seems to have turned bad.  He winds up reluctantly going back to the beginning to start over.  He moves in with the slightly conservative married sibling -- with kids -- and their mother in Milwaukee.  Milwaukee, where some of the guys who stood him up still live.  Including the one woman he fell for and some very good longtime friends.  In the 80s, he felt romantically and artistically frustrated in Milwaukee ("You haven't lived until you've emceed a talent show with a performance of 'Beat It' played by a polka band.")  Honestly, he didn't feel fully understood by family.  And now he's moved in with relatives in the Midwest to figure out a new life, deal with a bit of the old one and take on a role he's never had before -- "uncle."  The name is the show is And Bob's Your Uncle.


About Funny Girl that late afternoon -- I gave up and let the kids watch the Phineas and Ferb cartoon show on the Disney Channel.  When the friends went back home and my nephews got busy with other stuff, I went back into the family room and caught the last ten minutes of Funny Girl.  The oldest nephew walked in while I was, for the umpteenth time, transfixed by the "My Man" number.  He sat next to me quietly watched it too.  Then he sincerely said, "Wow.  She's singin' her heart out."

Fabulous.  My heart swelled with pride and affection.  For as many times as I've watched Funny Girl, it was really the first time I'd watched it with family.  What a great moment.  My late partner would've loved my nephews.  I think the feeling would've been mutual. 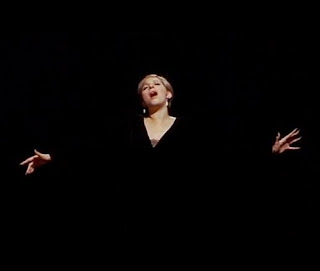