On Sunday, comedian/actor/TV host Arsenio Hall was the winner on NBC's Celebrity Apprentice.  I don't follow that show every weekend, but it sure was good to see Arsenio back on television and in a good network spot.  I sincerely hope the network exposure leads to him getting work opportunities to consider.  He deserves that. 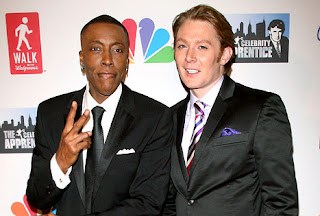 I've never met Arsenio Hall.  I would really like to interview him on TV.  I'm a fan.  I watched his nighttime talk show regularly.  I wish he'd get good movie script roles offered to him.  I'd even like to see him do like friend Eddie Murphy and show his chops with a dramatic role.  I had a prime time talk show on VH1 the same year Arsenio started his phenomenally successful entertainment talk show on Fox.  Our shows had different tones.  I'm not nor have I ever been a stand-up comedian.  He does stand-up.  I didn't have a band and a studio audience.  He did.  We both had A-list guests, I'm proud to report.  My show was on VH1 when cable was still pretty much in its infancy.  Cable was not as predominant in households then as it is now.  His audience, of course, was bigger.  But, being an African-American in the TV industry, I'm positive Arsenio Hall had to overcome even more hurdles than millions of his fans realize.  Getting the job is hard.  Getting attention is harder.  Getting the next job can be even harder, despite your success.  That's what I'd like to focus on in an interview.  PBS stations recently premiered an American Masters: Johnny Carson documentary.  Excellent feature.  Arsenio is seen giving respectful and sharp insight about Carson and his late night reign.  In Carson's later years, his new young friend, David Letterman, was on the scene.  Letterman would get dissed by NBC.  Conan O'Brien would be able to bond with Letterman on similar treatment years later.  Jay Leno would take the late night NBC spotlight.  CBS got into the late night talk show wars with a popular talent and lots of promotion.  Remember The Pat Sajak Show?  Sajak received a major profile in an edition of the Sunday New York Times Magazine section before his CBS late night premiere.  Press gave us the impression he'd be the new Johnny Carson or Merv Griffin. 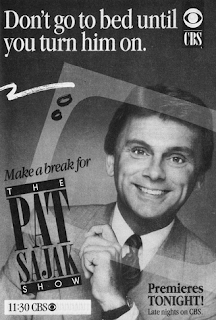 Arsenio Hall did not get that kind of attention from, shall we say, "upscale" media outlets.  They under-estimated the increasing power of the "urban" (minority) audience and influence in current music and movies.  And this is nothing against Sajak.  Full disclosure:  I became one of the monthly semi-regulars on Pat's couch.  He liked my talk show.  Also, VH1, MTV and CBS are under the same corporate umbrella.  Arsenio Hall brilliantly brought the MTV daytime audience into nighttime.  Rock acts seemed out of place appearing on The Tonight Show with Johnny Carson.  On Arsenio's show, they were a perfect fit.  Hall had broken new ground.  His was the show that publicists wanted to get their big name celebs on -- not Pat Sajak's show.  Remember this moment with future President of the United States, Bill Clinton? 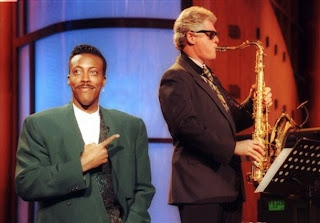 It was that kind of iconic pop culture moment and popularity that lead to Arsenio Hall getting this kind of attention -- the cover of Time magazine.  He made TV history. 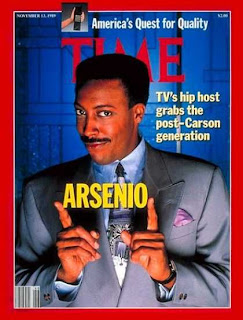 A black host, still rare on the late night talk show field, had changed the late night talk show game.  Unexpectedly.  Pat would return to Wheel of Fortune, driven off the late night road by Arsenio's ratings within a year.  Arsenio opened a big door for us minority performers with his achievement.  His Paramount show ran from 1989 to 1994.  He has not been on TV a lot since.  There was a Star Search host spot from 2003-2004.  Guest appearances on other shows -- like The Tonight Show with Jay Leno.  Months before he was announced as a contestant for the recently-concluded season of Celebrity Apprentice, he casually let it be known on Twitter that he'd like to do another talk show.

Let's go back to the 1980s and '90s and think of folks who hosted national talk shows:  Joan Rivers, Jon Stewart, Dennis Miller, Bill Maher, Pat Sajak, Craig Kilborn, Rosie O'Donnell and Arsenio Hall.  They would all go on to new talk show host opportunities.  Except for Arsenio.  Yes, even Pat Sajak got another talk show.  On Fox News Channel in 2003.  The one talent mentioned in the PBS American Masters special as the one person who challenged Carson's popularity is the one talent in that group who didn't go on to a second talk show.  That is rarely, if ever, mentioned by entertainment reporters or TV columnists.

Was Arsenio Hall not offered another talk show opportunity after 1994?  If not, why not and what does that say about the state of racial diversity in television?  Did he do something he regretted on the show?  I'd like to ask him those questions.  Rosie didn't have to tweet that she wanted another talk show.  She got one.  From Oprah.


More full disclosure:  During my VH1 talk show host time, I got very flattering reviews from the New York Times, from TV Guide and from People magazine.  I loved my three years on that job.  After my VH1 contract ended in 1990, was I ever offered another national talk show host opportunity?  No.  Did I want one?  Yes.  Once again, it was great to see Arsenio Hall back on television.  I hope we see more of him, on a regular basis, soon.