Actress/Novelist/Screenwriter Carrie Fisher created one of my favorite movie moms in the screenplay adaptation of her first novel, Postcards from the Edge.  Meryl Streep earned one of her annual Best Actress Oscar nominations for playing insecure, wisecracking Suzanne Vale, an actress straight out of rehab and eager to get back to work.  Shirley MacLaine did not get an Oscar nomination.  I feel she should have been a contender in the Best Supporting Actress category.  Her portrayal of Suzanne's overbearing but devoted Hollywood mom, Doris Mann, rates as one of the most sparkling and wise comedy performances of her film career.  Mother and daughter bicker "like war buddies," as Doris' husband says, but we know they love each other a lot.  Who else can drive you crazier than a relative?  Especially your mother. 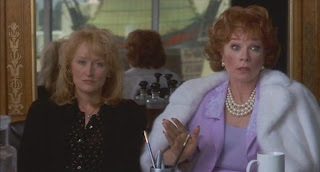 MacLaine's comedy skills were in peak form for this juicy character role created by a real-life Hollywood daughter for this Hollywood-on-Hollywood film directed by Mike Nichols.  MacLaine has had good luck with mom roles.  She was a young widowed mother with a little boy in her film debut, Hitchcock's 1955 mystery, The Trouble with Harry.  Her mom role in 1977's The Turning Point brought her a Best Actress Oscar nomination.  Her mom work in 1983's Terms of Endearment rightfully earned her the Best Actress Academy Award.  Her slightly ditzy-but-ultimately-wise Hollywood survivor, Doris, is one of MacLaine's finest turns since Terms of Endearment.  Doris was a movie star but she's not a Mommie Dearest or socially detached with a monstrous ego like Norma Desmond in Sunset Blvd.  Doris was a working class movie star and parent.  She would've worn pearls and an Edith Head original to a PTA meeting.  She'd do her own supermarket shopping in the morning and sing a number at a Hollywood gala benefit dinner that night.  Trying to get her to give up the spotlight is about as easy as getting a piece of pot roast away from a Jack Russell terrier.  Or, in Old Hollywood's case, a Jane Russell terrier.  This is evident in one of MacLaine's top scenes.  Doris belts out her own version of Sondheim's "I'm Still Here" at the Welcome Home from Rehab party she tosses for Suzanne. 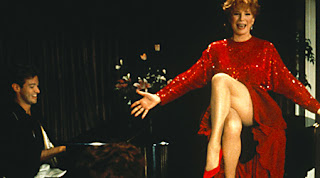 I've written before that, if you want a real grasp of Carrie Fisher's often overlooked brilliance as a writer, read her hit novel and then see her movie version of Postcards from the Edge.  She wrote the book and the screenplay.  In the movie, we see characters that we met in the book but it's almost a totally different story.  The big surprise is that Doris is a minor character in the novel.  She's not in more than 10 pages.  The movie is quite different.  The mother/daughter relationship is central.  Fisher drew on her real life experiences for inspiration in writing the screenplay.  She had international movie stardom from the original Star Wars trilogy.  Her first novel got rave reviews.  But she'd never written a screenplay.  She needed tips on how to craft a screen narrative about Hollywood life.  Reportedly, Nichols had her watch one of the best movies about that very subject -- Vincente Minnelli's The Bad and the Beautiful. 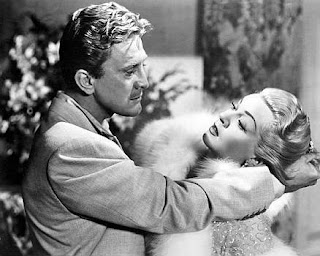 Like Streep's Suzanne Vale, movie actress Georgia Lorrison (well-played by Lana Turner) is a co-dependent Hollywood daughter who needs to kick an addiction and get out from under the shadow of a Hollywood star parent so she can truly grow and stand on her own talents.  Fisher wrote dialogue that not only sounded real but was so good that it became quite quotable with moviegoers.  Case in point -- the staircase mother/daughter argument scene in which Suzanne mentions the business about Doris lifting her skirt at one of Suzanne's high school birthday parties.  It's a fierce and funny scene fueled by the fact that these two women are verbally firing at each other with their individual addictions blazing.  Suzanne has a handful of pills.  Doris has a breakfast shake that's half vodka. 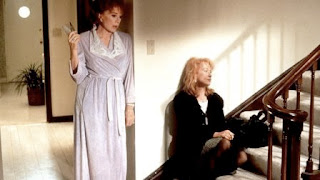 When I was on VH1 in the late 80s, Carrie Fisher was one of my guests on the first talk show I hosted.  She was promoting the book at that time.  She confirmed that Mike Nichols would be directing the film version.  Initially, he had his eye on Lee Remick for the Doris Mann role.  Then came the sad news that Remick, noted for her wonderful work in Days of Wine and Roses, Anatomy of a Murder, Wild River and The Omen, was stricken with cancer.

In our interview, Carrie confirmed that her mother, Debbie Reynolds, was Mann-hungry.  Debbie, the former Queen of MGM Musicals and Comedies, campaigned to play Doris Mann in the movie written by her daughter, "Princess Leia."  Debbie came on my show.  She confirmed that she wanted to play Doris Mann.  During Debbie's reign at the MGM Hollywood studio, her dynamic musical comedy/drama work as The Unsinkable Molly Brown brought her an Oscar nomination for Best Actress of 1964.  Shirley MacLaine was also one of my VH1 talk show guests.  She came on when she had just landed the Doris Mann role.  On my show, MacLaine confirmed that she had been slated to star in MGM's big screen version of the Broadway musical hit, The Unsinkable Molly Brown.  MacLaine told the sweet story of how Debbie (on the right in the black and white pic with Shirley) convinced her to be cool with the change in casting. 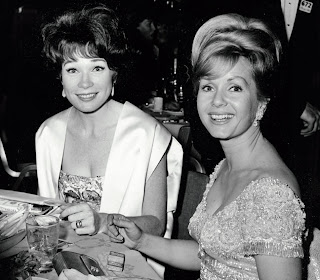 MacLaine had been discovered on Broadway in the musical comedy, The Pajama Game.  She got to Hollywood and worked with Hitchcock, Billy Wilder, Vincente Minnelli and William Wyler.  She had two Best Actress Oscar nominations to her credit and was the leading lady in two films that won the Oscar for Best Picture (Around the World in 80 Days and The Apartment).  Debbie assured Shirley that she'd go on to even more great roles but, for her, the days of the big MGM Hollywood musicals were near the end.  She needed The Unsinkable Molly Brown.  Debbie was right.  She was perfect for the role. 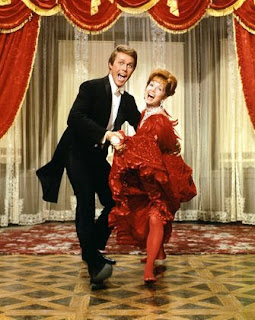 When I brought up the fact the Debbie did a role originally slated for Shirley and Shirley had then landed a role that Debbie wanted, she laughed and said "Karma!" Without being asked, MacLaine generously added that Meryl Streep was "just amazing" in rehearsals. 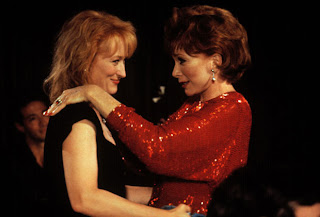 Shirley's pretty amazing in this movie herself.  Besides her funny moments, I love the tenderness between mother and daughter in the hospital reconciliation scene near the end.  I loved the scene when first I saw it at a screening in 1990.  With the passage of time, I love it even more today.  It resonates more to me now because I had a tender hospital reconciliation encounter like that with my mother just this year.  During it, I thought of Suzanne Vale and Doris Mann.  And I smiled.  Then I thought of a Suzanne Vale line from the movie:  "I don't want life to imitate art.  I want life to be art."  That afternoon together, for Mom and me, was art.  Oh!  Here's some movie trivia:  Guess who had a scene with Meryl Streep in Postcards from the Edge.  Pat Sajak.  He had a CBS late night talk show at that time.  Suzanne Vale was a guest on The Pat Sajak Show.  Unfortunately, the scene didn't make the final print.  That's how the Wheel of Fortune spins in Hollywood sometimes.  Happy Mother's Day.  Go make some art.

It's called DAD STOP EMBARRASSING ME! and it's on Netflix. Talented Jamie Foxx is one of those performers who starred in a sitcom a... 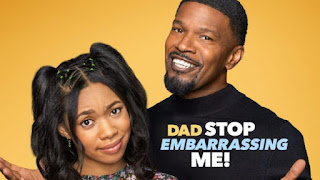