1979 was a good year for Hollywood movies.  In the Oscar nominations, the race for Best Actress was a strong one.  The nominees were Jane Fonda for The China Syndrome, Marsha Mason for Chapter Two, Sally Field for Norma Rae, Jill Clayburgh for Starting Over and Bette Midler for The Rose.  The Oscar went to the favorite -- Sally Field.  Had Midler won, it would have been a surprise but not an undeserved surprise.  Hers was a great film debut.  Her gritty, soulful performance in that rock music drama still holds up. 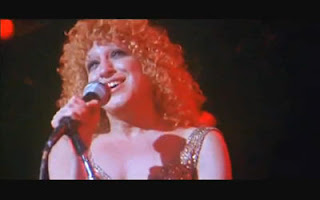 A couple of years ago, I was telling a 30-something buddy of mine that I'd tired of American Idol.  True, a lot of those contestants had really big voices.  But, to me, their singing had become of contest of who could dazzle the judges with their vocal gymnastics.  They weren't feeling the lyrics or even listening to the lyrics.  And many were merely replicating what they'd heard before.  Case in point:  The song "At Last" made its debut during World War II.  It was first heard in the 1942 movie Orchestra Wives, played by the very popular Glenn Miller band.  After it was introduced in that film, the hit song was recorded by several vocalists.  Today, if a young woman gets on a talent show and says that she's going to sing "At Last," you know she will imitate the Etta James version recorded in 1961.  Christina Aguilera did that.  Another example is her cover of "Have Yourself A Merry Little Christmas." She does great runs and shows off her pipes, but is she connecting to the storyline of the lyrics?  No.  Compare her version to that by the woman who first sang it -- singer/actress Judy Garland in the classic 1944 film musical, Meet Me in St. Louis. I told my buddy that I wanted to turn on American Idol and see someone deliver some raw, real rock & roll emotion like Bette Midler did in The Rose. 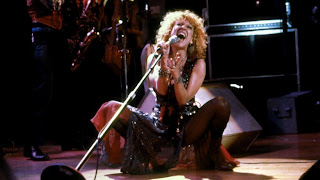 He had no idea what I was talking about.  He knew the Bette Midler of the movie Beaches and the music video "Wind Beneath My Wings" (which I presented several times when was a fabulous veejay on VH1 in the late 80s).  I ordered him to rent The Rose, watch it, and then get back to me.  He did.  He was stunned by her performance.  Especially her final number.  I knew he would be.  I was too when I saw it on the big screen.  Back then, we knew Midler from several very funny appearances on "The Tonight Show" with Johnny Carson when it was still broadcast from New York City.  She had a pop hit with her sexy, slow cover of The Beach Boys' "Do You Wanna Dance?"  And her concerts, like the one recorded in Cleveland for a 1977 album release, were sell-outs. 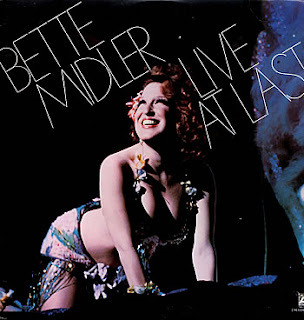 Midler could literally have you guffawing with laughter with campy, raunchy jokes and then -- just a few minutes later -- put tears in your eyes with her renditions of songs by John Prine or Kurt Weill.  Still, we weren't ready for where she took us as Rose.  In New York, I was fortunate enough to be in classes taught by casting director and acting coach Dani Super.  She taught us the importance of the interior life -- what we communicate about a character via carriage and costuming even if the character is not speaking.  Midler nails that in this film.  In her first scene, we know exactly what we need to know about this troubled and troublesome rock star by the way she exits the private jet. 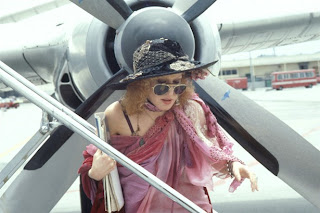 Mary Rose Foster was the misfit in school and the shunned outsider.  Now known as The Rose, she's one of the hottest rock singers in the country.  She had a drug habit.  But fame seems to be the harder addiction to kick.  Midler reveals why by taking us into the character's heartbreak.  We see why she's driven to be a star and why she seems driven to self-destruction.

Midler first gained big popularity with New York City audiences (yes...mostly gay men) with her renditions of 1930s and 40s songs introduced by The Andrews Sisters or in Busby Berkeley or Fred Astaire & Gingers Rogers musicals.  The Rose had a hard rock score.  She worked it.  The screenplay cleverly includes business that works for Rose and includes a sweet nod to Midler's first loyal fan base.  During Rose's grueling tour, she finds romance with a solid guy.  Huston is a good man but he'd be happier on a ranch in Texas than being on the road with show biz types.  They have a tiff.  He splits.  She tracks him down to a Manhattan bathhouse.  Frederic Forrest was a Best Supporting Actor nominee for this performance as the fellow rebel who really cares. 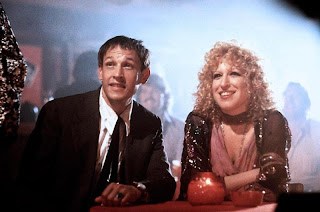 It's part of the Midler legend that she started her career with a cabaret act in a deluxe bathhouse for gay men in Manhattan. Huston was not catching a steam in that kind of bathhouse.  He's in a boring one.  Huston and Rose hit a club downtown in the Village.  She's spotted and surrounded by drag queens for an impromptu fabulous number of the "Only in New York" kind. 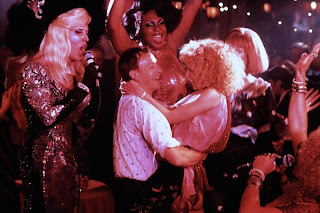 Other memorable scenes include The Rose -- seated alone before a mirror in her dressing room -- pumping herself up for her performance and a skybox scene with her manipulative, selfish but productive manager played by Alan Bates.  He's helped make her a star.  She's helped his bank account.  It's a very co-dependent relationship.  He's telling her that if she takes time off, she'll miss out on major tour dates overseas and that chance to increase her stardom.  She does want that but she's running on empty.  Watch Midler as Rose here.  The artist knows she's really being sold and used as a commodity.  Being treated more like a factory worker than an artist.  She's so hip to this game but so needy for attention.  Watch how she listens to him and slowly removes her sunglasses.  Watch the look in her eyes.  Brilliance.  That's the kind of work Dani Super was teaching us to do in class. 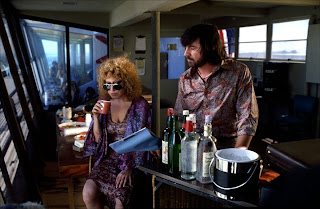 Then we have her hometown heartbreak scenes that lead up to phone call to her mother.  This is where she truly proves her dramatic depth.  She's so vulnerable, lost and emotionally raw in this scenes.  She's still the misfit. 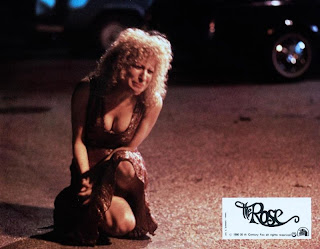 All this drama forces her to fall back on a bad habit.  She makes it to her concert appearance.  Fragile and fractured, she performs heartbroken and high.  She's on drugs.  Here, "Stay With Me" is not just a rock song.  Midler treats it as a monologue.  It's Rose's emotional plea, a plea she musically proclaims while under the influence. Bette Midler's vocal and physical work are outstanding in this long number.  Her acting, attention to physical detail and emotional commitment, is so specific and true that you're galvanized even if you weren't previously a Midler fan. 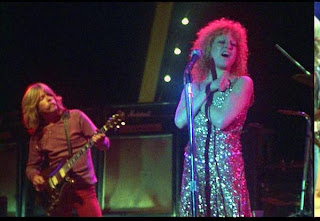 This is the kind of originality and skill I was missing on American Idol.  If, like my buddy, you only know the movie Midler from Beaches, Big Business or The First Wives Club, you need to see this 1970s rock drama.  For a double feature, follow it with Cameron Crowe's wonderful comedy set in that same rock music period, Almost Famous.  In The Rose, Harry Dean Stanton appears as another music star.  His other film that same year was Alien.  He currently can be seen in The Avengers.  As for Midler, check out her film debut as The Rose.  It's one of Bette's best performances.