The "King of Kings" and Me

In one of my previous blogs entries, I promised I would tell you about my Easter weekend when a biblical epic had a less-than-heavenly impact on my possible love life.  The movie is the 1961 big budget life of Christ biopic called King of Kings.  This popular Hollywood production starred handsome Jeffrey Hunter as sort of a Malibu Jesus.

Seriously.  Director Nicholas Ray, who directed James Dean in Rebel Without a Cause, gave moviegoers a Messiah who was practically runway model material in NTBR (New Testament Banana Republic).  This Jesus worked that crimson robe with an ecru garment under it.  Jeffrey Hunter's Jesus was so Pacific Coast Highway, he should've had a guitar slung over his back as he preached to the crowds:  "I know a Song of Solomon and it goes a little somethin' like this..." 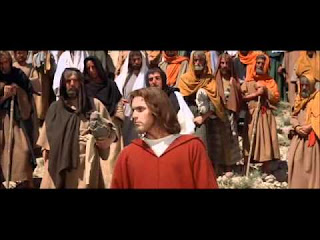 One Easter weekend, King of Kings aired on TCM, Turner Classic Movies, the afternoon I'd invited a buddy over to my humble New York City studio apartment.  Yes, I was romantically interested and was trying to court him.  We were going to a neighborhood diner to grab a late afternoon bite and then take in a movie.  I had the TV on when he came over.  "What's that?" he asked.  I told him.  He sat down, I got a couple of light beverages for us and sat down with him.  I was not surprised that he took an interest in the TCM presentation.  When we'd met two years earlier, he'd mentioned that he was "a Christian" but I never ventured further into that.  He'd also said that Vin Diesel was hot, so I figured I had freedom to speak.  I casually said what I wrote up top -- that Jeffrey Hunter was very "Malibu Jesus."  My buddy replied, "What do you mean?"  I said, "He looks like he's gonna say, 'Dude!  Do you know who my Father is?'  That is such a Southern California Savior.  He should be in a Corvette convertible."

My buddy didn't smile, he didn't laugh.  He squinted a bit but I thought that was because he'd removed his glasses.  It didn't occur to me that he was deep Christian.  He'd attended a strict Christian college in the South.  We watched more of the movie, not speaking, and the story of Jesus was then in the last act.  I'm assuming you know how it ends.  The trial didn't go well.  This rebel with a spiritual cause is innocent but a major threat to a certain greedy corporate culture.  His physical end is near.

I commented, "You know...if you think of this Bible story as a novel...it's brilliantly written with a brilliant arc.  And the way Jesus dies is so ironic."  I glanced over at my buddy to see that his jaw was clenched.  I immediately realized, "This will be a no-nookie Easter weekend.  It'll be easier for Jesus to resurrect from the dead than it will now be for me to get lucky tonight with Kevin" (not his real name).  "What do you mean?" he said.  There was a slight chill in his voice.  I  did not mean to offend his sense of Christianity but I had a point to make and I proceeded to make it as delicately and succinctly as I could.

Kev:   "No, really.  What do you mean about it being ironic the way Jesus died?" 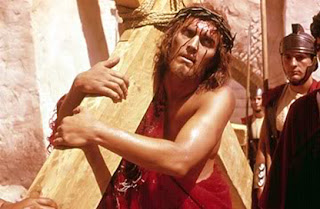 Me:  "I grew up Catholic.  I'm a believer.  I'm just saying that if you read the Bible as a novel, it is genius storytelling.  And, if you think of it as novel, isn't it ironic that a former carpenter would end up like that?"

Kevin did not want to think of The Good Book as a novel.  I apologized sincerely.  He said, "We should go eat."  He thawed out eventually in the diner.  I think my apology helped.  We were reading our menus when Kev said, "I've never heard of this.  Wow.  I may get that."

He ordered one.  He was delighted.  It was as if our little misunderstanding was miles and miles away.  At that moment, there we were.  Two men in downtown Manhattan, two guys definitely over the age of 30, having a late lunch in a diner on Easter weekend.  One knew the Bible but didn't know what a Belgian Waffle was.  The other one picked up the check.  Because that's what Jesus would do.