Happy Birthday to you, Morgan Freeman.  That talented, Oscar-winning actor is a favorite with American filmgoers.  Look at the moves on his resumé:  The Shawshank Redemption, Lean on Me, Glory, Driving Miss Daisy, Unforgiven and Million Dollar Baby.  He's got five Oscar nominations to his credit.  He won his Best Supporting Actor Oscar for Clint Eastwood's Million Dollar Baby.  We tend to see most Morgan Freeman characters as being stoic, having a certain gravitas.  I saw a Morgan Freeman do a role in a 2006 indie film that had me giggling through the picture and smiling as I left the theater.  He shows his loopy comic skills as the middle-aged movie actor doing research for a new role at a low-rent Southern California supermarket in 10 Items or Less. 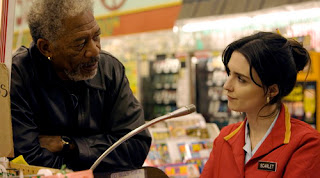 Freeman is so festive and funny in this road movie.  The actor has a fear of failure that's blocked him from not making a movie in a while.  Also, he doesn't drive.  As preparation for a new film role, he arranges to watch the inner workings of a supermarket in a pretty bland and remote section of SoCal.  He becomes fascinated with the no-nonsense Latina clerk named Scarlet.  The actor gets stranded because his driver has to use the van (yes, the van) to make another pick-up.  10 Items or Less takes a turn and merges into the road movie/buddy picture when the actor asks Scarlet for help.  He needs a ride.  He also needs an ego boost because, in the supermarket, he found one of his movies in a discount bin.  In films like this, one discovers that some of the best friends you could ever have are the strangers you meet on the road of life.  10 Items or Less is no exception.  Scarlet and the actor each other around an obstacle in their lives.  This truly fun film is only about 80 minutes long and it's driven by the wonderful chemistry between Morgan Freeman and Paz Vega.  She's terrific as Scarlet.  As for Freeman, he underplays the comedy like a pro and gives his character a surprising and totally delightful hint of mint.  It's one of my favorite comedy performances of 2006. 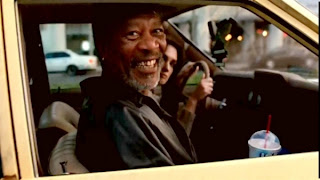 Like Veronica Lake in that classic road movie from Preston Sturges, Sullivan's Travels, Freeman's character isn't given a name.  Lake was "The Girl."  Freeman is "Him."  This actor has had years of living an upscale Hollywood life.  Scarlet introduces Him to a whole new world -- trailer parks, car washes and shopping in stores like K-Mart.  The actor's  retail enchantment scene is fabulous.  So is the scene in which the actor studies the receptionist at a construction work company.  The receptionist is played by Jim Parsons before he became a sitcom star as Sheldon Cooper on The Big Bang.  Another bit player in this film who went on to big success is future Oscar nominee Jonah Hill.  He played the guy with the used van, the actor's driver.  You like the quirky people in this short, charming movie.  You care about them.  You'll love seeing Morgan Freeman in a fresh kind of role.  I loved the diversity of casting Freeman as Him.  That role could've been played by Albert Brooks, Bill Nighy, Ben Kingsley, Michael Douglas, Stanley Tucci or William H. Macy.  There needs to be more casting enlightenment like that in Hollywood.  To get what you want in life, you need to call up some courage, get out there, act and dress the part.  That's what the Scarlet and the actor learn from each other in 10 Items or Less.  If you rent it, stay through the credits for more funny material from Mr. Freeman. 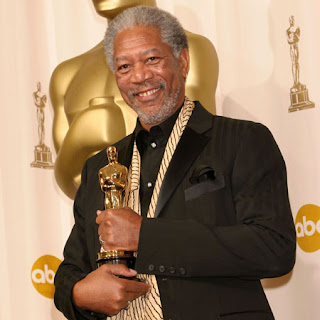 In the spring of 2010, a longtime friend contacted me to co-host a film-related travel/interview series pilot.  We worked with a producer in Atlanta named Walter Biscardi and shot the project in and around the Atlanta area.  We got the green-light to shoot this half-hour demo from Georgia Public Broadcasting.  The three days shooting that show were three of the happiest days in my long broadcast career.  I loved the crew, my co-host, the show, the shooting experience -- all of it.  An absolute joy and a blessing.  The show was so good I was sure I'd be relocating to Atlanta to start production.  I was quite heartbroken that GPS didn't pick up our project.  I really wanted to work with that crew.  On location in our pilot, I interviewed a white retired Southern cop who'd worked with several film crews that shot in the Atlanta area.  One was the Driving Miss Daisy crew.  He had many photos with stars and many stories.  On camera, he told me about meeting Morgan Freeman.  It was hot day and Freeman had to wear autumn clothing for that day's scene in the film, a film that would win the Oscar for Best Picture of 1989.  Offering Freeman a cold drink, the cop said "This must be hard work."  Freeman, he said, replied "No harder than pickin' cotton."  The cop laughed because it was such a Southern thing to say.  Then he discovered Freeman meant that literally.  They chatted.  Morgan Freeman's family was so poor when he was a youngster that, to help make money, he got up in the pre-dawn hours and picked cotton with the grown-ups down South.  Then he grows up, studies, and acts on Broadway.  He does educational TV as a member of The Electric Company.  Then he becomes an Oscar-winning actor.  One of his Best Actor Oscar nominations came for playing Nelson Mandela in 2009's Invictus.  The retired cop said to me on camera, "Is that not a great American story or what?"

It certainly is.  How I wish we could've shared that story with a national TV audience.  Happy Birthday, Morgan Freeman.  Loved Him.  Love you.  P.S.  Walter Biscardi's next project did get picked up.  You can see the environmental series, This American Land, on several PBS stations.