This is my first Gay Pride Sunday living with relatives (temporarily while I seek work) in the suburbs of California.  This afternoon, I may treat myself to a special Pride Weekend cocktail inspired by the two lead characters in Brokeback Mountain. 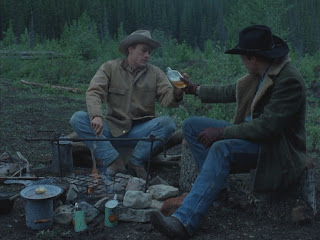 I call my drink "The Ennis Del Mar-tini with a Jack Twist."  I'm pretty sure it's been served in West Hollywood around this time of year.  While throngs in thongs of guys at parades this weekend all across the country demand "Equality For All," it's pretty amazing to look at the liberty that's been gained.  Especially in television.  When I was a kid, there wasn't anyone openly gay on weekly television.  Now we're stock characters -- especially on cable.  You can't swing a dead cat without hitting six queens who want to hang a spice rack in your kitchen on a home makeover show.  Seriously.  In my youth, there was no Nate Berkus giving us home tips on television and telling us about his new boyfriend. 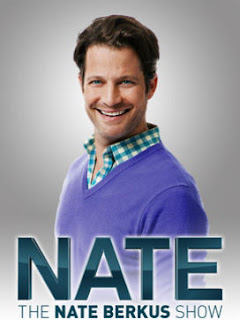 Wonderful Jane Lynch wins an Emmy and thanks her wife.  Equally wonderful Ellen DeGeneres wins TV viewers with her warmth on a weekday talk show.  She too talks about her wife.  It wasn't like this 20 years ago.  My two nephews absolutely love Ellen DeGeneres.  They're hoping I can resurrect my national TV career so I can, perhaps, hook them up with an introduction to her one day.  By 1972, I'd figured out why I gotten so light-headed every time I saw Robert Conrad shirtless as TV's The Wild, Wild West. 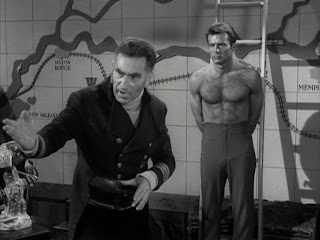 I was in fear that Mom would find me watching the breakthrough Made-for-ABC TV Movie, That Certain Summer.  There were Hal Holbrook and Martin Sheen playing a gay couple living in San Francisco.  Holbrook's character was a divorced man whose teen son was arriving to visit for a few days.  He hadn't come out to his son. 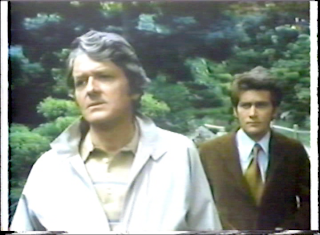 That was provocative programming, sensitively done.  I tried to watch it in secret.  Today, I'm the uncle of two terrific grade school nephews.  Every week, they ask my brother and my sister-in-law if they can watch ABC's Modern Family.  Two of their favorite TV characters are Mitch and Cam (actors Jesse Tyler Ferguson and Eric Stonestreet). 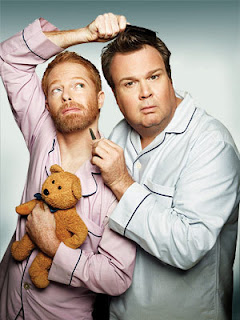 Wow.  That's progress.  As I've written before, Hollywood no longer discourages straight male actors from playing openly gay characters.  Just the opposite.  Playing gay could be your ticket to Hollywood Prom Night.  William Hurt, Tom Hanks, Sean Penn, Philip Seymour Hoffman -- all Oscar winners for playing gay men.  Val Kilmer didn't get an Oscar nomination for playing a gay man but he did a fabulous job in a very progressive film.  So progressive that the studio probably didn't know how to market this crime comedy/drama called Kiss Kiss Bang Bang.  Val's gay character was not tragic.  He's wasn't a victim.  He wasn't a freak.  He was the tough hero.  Perry Van Shrike is one of the best private detectives in L.A.  Without him, the crime doesn't get solved.  Greta Garbo, as feminist Russian envoy Ninotchka, firmly states "Don't make an issue of my womanhood" in that sophisticated 1939 comedy.  That same vibe applies to Perry.  Don't make an issue of this cop being gay.  He can knock you down, cuff you and quote lines from Mommie Dearest at the same time.  "I Will Survive" is his cell phone ring tone.  Robert Downey Jr as the smalltime hapless crook-turned-actor discovers this when he unexpectedly winds up attached to Perry for movie research purposes. 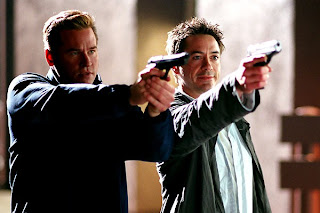 The research gets quite real.  The new actor helps Perry in a Christmastime murder case.  He meets struggling actress Harmony Lane (a yummy Michelle Monaghan). 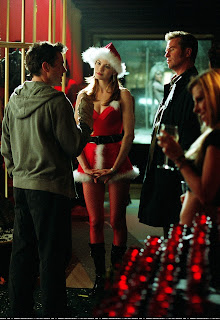 Kilmer and Downey shine together.  That's another progressive bit about this movie: To a degree, it becomes a gay guy/straight guy buddy picture.  This was done within a send-up of crime movies like The Maltese Falcon, The Big Sleep and a touch of L.A. Confidential.  It's brisk, it's well-acted, it's entertaining.  It was very cool and refreshing to see a no-nonsense gay guy as the hero.  The community needs Perry to fight crime.  Maybe it's not a classic crime movie like Chinatown, but it took a giant step forward in its embrace of diversity and in its originality.  Personally, I dig my fellow gay friends.  However, especially when I lived in New York, there were lots of times when I just needed to hang and relax with a straight buddy.  I didn't want to hear about Sex and the City movies, I didn't want to hear "I'm not eating carbs," and I didn't feel like making a fabulous fashion statement to go to some trendy new place where a Cosmo costs the same as a salon haircut.  I wanted laughs over some beer, barbecue and cornbread in a joint that had some jazz on the jukebox.  I miss my Great Straight Dates.  I bet Perry the Private Eye had a few of those.  As for director Shane Black's Kiss Kiss Bang Bang... 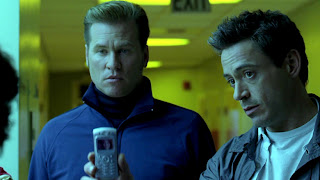 ...Warner Bros showed have given us a sequel to this hip 2005 release.  Keep it in mind.  It could provide 100 minutes of Pride Weekend fun viewing.  (The hospital bit with Abe Lincoln breaks me up.)  Have a great Pride Weekend.  As we demand equality, let's look at how far we've come before the parade passes by.  Also, I could not have made it on my journey thus far without the help, support and love of gay and lesbian friends, acquaintances and beloved family members.  I am so very grateful to you all.  Cheers!