I know I am not the only classic film fan who wonders "What the hell kind o' magic potion was in the Hollywood water of 1938 that enabled screenwriters to come up with so many pictures for production that would become gems of 1939?"  One of those pictures is Ninotchka.  This is the movie in which "Garbo Laughs!"  After years of playing serious vamps and suffering women, Garbo's first leap into a champagne cocktail of a comedy deservedly got her Best Actress Academy Award nomination. The film was nominated for Best Picture of 1939.  It was directed by Ernest Lubitsch.  It has the "Lubitsch touch," as Billy Wilder would say.  To me, it also has the Wilder touch.  He and Charles Brackett did the screenplay.  Ninotchka is a no-nonsense Russian special envoy sent on a mission to Paris.  Capitalistic Paris.  Three of her male comrades were sent there on a mission but fell under the spell of Paris and forgot their strict Soviet Union way of behaving.  Retrieving some Russian jewels is also part of the mission.  Ninotchka has her work cut out for her.  Especially with playboy León (Melvyn Douglas) giving her directions. 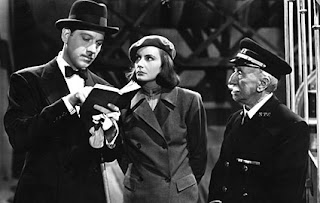 When she warns, "Don't make an issue of my womanhood," we know that the chilly Russian will be defrosted in France by the end of the movie.  Garbo's nickname was "The Swedish Sphinx" because she was so mysterious, fascinating and reclusive.  She was not at all the Red Carpet type.  She did her work and hated publicity.  She loved her privacy.  "I want to be alone" was her trademark phrase.  That doesn't mean she lacked a sense of humor.  When it's debated whether or not she had one, I feel this film performance is proof that she did.  She's very funny in it and obviously gets the humor of the script.  My favorite scenes are when Ninotchka arrives and realizes why her comrades loved the French hotel's room service when ordering cigarettes, the restaurant scene in which León tries to tell her a joke and the nightclub scene where she has her first taste of champagne.  I also love the "pitch" scene.  León gets Ninotchka to his apartment at night.  They're on the floor in the living room.  He's pitching woo to her the best way he can, but he can't crack that beautiful Soviet exterior.  It's so...so formal. 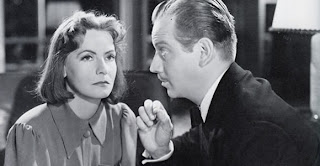 Here's where the Wilder touch comes in.  This seemingly innocent and throw-away dialogue gets me every time. 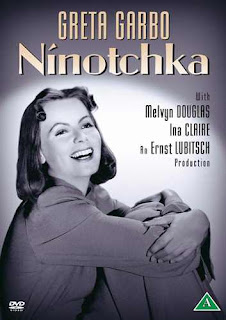 One last thing.  You know how the Academy Awards now lets 10 films qualify for Best Picture but, this year, there were only 9 nominees?  Here are some of the other Hollywood films released in 1939:  Wuthering Heights, The Wizard of Oz, The Women, The Hunchback of Notre Dame, Only Angels Have Wings, The Roaring Twenties, Dark Victory, Love Affair, Mr. Smith Goes To Washington, Golden Boy, The Privates Lives of Elizabeth and Essex, Gunga Din, Of Mice and Men, Midnight (another comedy screenplay by Billy Wilder and Charles Brackett), Stagecoach, the animated Gulliver's Travels, Bachelor Mother, The Rains Came, Destry Rides Again and Gone With The Wind.