Time for Some Astaire

If someone asked me "If you could have a Sunday brunch with 10 famous entertainers past and/or present, who would they be?," Fred Astaire would definitely be at the top of my list. I'm serious. My sister can attest to this. My fascination with Astaire started when I was in elementary school. His classic RKO musicals with Ginger Rogers aired frequently on local Channel 9 in Los Angeles when I was a kid. Those musicals ignited my passion for classic films, a passion that still burns brightly today. 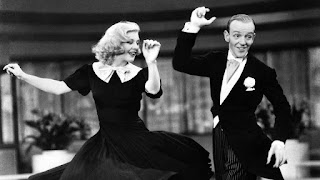 This post has numbers from two Fred Astaire films for your -- and my -- entertainment. In Astaire's 1959 autobiography, STEPS IN TIME, he wrote that the 1950 Paramount musical he did with Betty Hutton was one of his personal favorites. 1950's LET'S DANCE is rarely aired on TV. I wish it was. It's a breezy little musical with the two stars in fine form. Astaire play' a nightclub entertainer. This rehearsal number he did -- when he was about 50 in real life -- knocked me out when I first saw it. This number also wowed a young dancer named Bob Fosse. Here's the "Piano Dance" from LET'S DANCE.
The 1950s was a decade in which Hollywood shot out color remakes of 1930s films such as MY MAN GODFREY, IT HAPPENED ONE NIGHT, THE WOMEN, 1939's LOVE AFFAIR, SHOW BOAT, THE MAN WHO KNEW TOO MUCH, A STAR IS BORN and IMITATION OF LIFE. One of the best remakes of that decade was 20th Century Fox's glossy, colorful, Cinemascope musical of 1955, DADDY LONG LEGS, starring Fred Astaire and Leslie Caron. This was a greatly improved remake. The previous adaptation, a 1931 Fox film of the same name, was extremely racially offensive in its first five minutes.
Astaire did the new DADDY LONG LEGS because his beloved wife, Phyllis, urged him to do it. She'd read the script and loved it. He loved the new songs written by Johnny Mercer.  Leslie Caron starred as the French college student who's falling for her roommate's bachelor uncle. She has no idea that he, an absolute gentleman who dines with her when she visits New York City from her New England college campus, is really a multi-millionaire. Here, Astaire introduces "Something's Gotta Give." It brought Johnny Mercer one of his many Oscar nominations for Best Song.

I hope you enjoyed those Fred Astaire numbers as much as I do.