Here's some American history for you: I learned how to read and write when interracial marriage was still illegal in some United States. When the classic 1967 film, GUESS WHO'S COMING TO DINNER, was in production, interracial marriage was still illegal in some United States. Richard and Mildred Loving had spent time behind bars. Why? Because they got married in 1958. She was Black. He was White. Interracial marriage was forbidden in the state of Virginia. The couple took its case to the Supreme Court -- and won. The landmark 1967 Loving v. Virginia case led to interracial marriage becoming legal all across America. Ruth Negga played Mildred Loving in the 2016 film called LOVING and the performance earned her an Oscar nomination for Best Actress. Australian actor Joel Edgerton played Richard Loving. He should have been an Oscar nominee for Best Actor. In magazines Mom and Dad purchased in the 1960s, when I was a boy, I saw photos of the Lovings. He was a quiet, kind man who just wanted to build a home and live in it with the woman he loved. My mother would constantly smile and say, "You can tell how much he loves her by just looking at those photos." 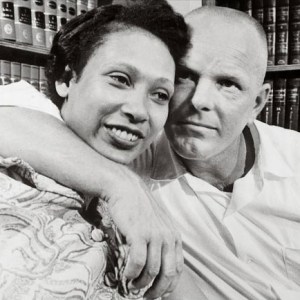 I understood what Mom said. 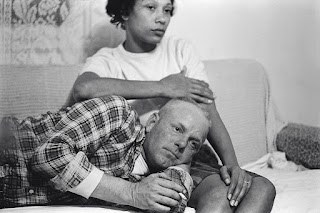 If you have not seen Ruth Negga in that very good film, you can do so now if you get Netflix. It's there and I highly recommend you see it. Negga and Edgerton get into the souls of those two characters. Their performances are moving and poetic in the depth of their simplicity. Watch this trailer for LOVING, a film directed and written by Jeff Nichols.

I bring this up because Ruth Negga is currently reading some good reviews for her new film. It's called PASSING. The 1959 movie, IMITATION OF LIFE starring Lana Turner, is a glossy and colorful melodrama that's quite popular with classic film fans. It's a tale of racial inequality and maternal love. The 1959 film is a remake. The original version was a hit film of 1934. Both films gave us the story of a young Black woman who is so light-skinned that the can pass for being White. Her mother is dark-skinned. The grown daughter starts to deny her race because of the privileges she enjoys passing for White. This causes conflict in the relationship with her long-suffering, long-single working mother. Claudette Colbert had the White mom role later done by Lana Turner. In the original version, the Black mother and daughter were played by Louise Beavers and Fredi Washington. Had the Best Supporting Actress category existed at that time in the Academy Awards, both women should have been nominated. Their performances are memorable and heartbreaking. 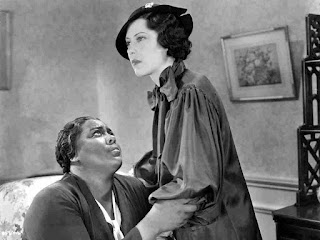 Unlike the 1959 Lana Turner remake, the light-skinned Black daughter in the original 1934 version was played by a light-skinned Black actress. In my research, I read that Hollywood executives told Fredi Washington that, with her looks and talent, they could get her roles like Joan Crawford and Constance Bennett got in the 1930s -- if she pretended to be White. Fredi Washington refused to deny her race. She left Hollywood, did stage work in New York and became a Civil Rights activist.

PASSING, based on an acclaimed 1929 novel by Nella Larsen of the Harlem Renaissance, is about the practice of passing. The film was directed and written by Rebecca Hall. Also an actress, Hall was seen in Ron Howard's FROST/NIXON, THE TOWN starring Ben Affleck, and she was Vicky in Woody Allen's VICKY CHRISTINA BARCELONA. Here's a trailer for PASSING starring Ruth Negga as Clare. Clare is "passing" and has married a wealthy, prejudiced white man in the 1920s.