About DIANA: THE MUSICAL

On Netflix now is this filmed version of the biographical Broadway musical scheduled to open in November. The show is DIANA: THE MUSICAL. Yes, it is about the late Princess of Wales, the enormously beloved Lady Diana. The play was supposed to open on Broadway last year, but the COVID pandemic put us all in lockdown. This filmed version was shot without an audience. In the first 15 minutes, we see a number in which Buckingham Palace servants are choreographed like they're the Solid Gold Dancers. And the show really doesn't get much better after that. 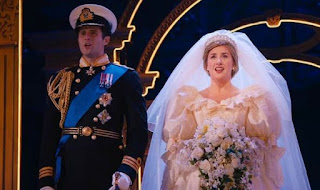 When you hear the songs, you immediately notice the heavy influence of Andrew Lloyd Webber's EVITA score. But it's not as good as EVITA. It's more like CATS with the furry critters replaced by British royals. Add to that a touch of the community theater play performed in the mockumentary WAITING FOR GUFFMAN. There were performances that I liked and the William Ivey Long costumes are excellent but those song lyrics! "She could moan on the throne...," "How about for a start, Don't act like a tart...Diana!"..."Revenge is best in a feck you dress..."

Prince Charles comes off as an absolute tight-ass jerk who can't dance and knows nothing of current rock music, Camilla comes off like a two-faced dull woman having an affair with Charles. The Queen remarks that, in days of yore, the Palace would've dealt with non-conformist Diana by simply chopping off her head. And there's the constantly pink-clad romance novelist, Barbara Cartland, singing and dancing about a hunk British horseman who allegedly had a fling with Princess Diana. The paparazzi who hounded Diana in the 1980s and 90s are dressed like newspaper reporters in a 1930s Hollywood movie. Think of the group of reporters that took too many flash photos and enraged KING KONG (1933).

Watching it made me think of a dear friend and former co-worker who was thrilled to have tickets to the final preview of Broadway's CARRIE; THE MUSICAL, based on the horror film that starred Sissy Spacek. Kathryn came to work the next morning and looked shaken. I asked her how the show was. She seriously replied, "If you see it, don't make the same mistake I did." I had to know what the mistake was.

During the show's intermission, Kathryn went to the lobby. The publicist who gave her the tickets spotted her, went over and asked "How do you like the show?" She enthusiastically and innocently replied, "It's one of the funniest shows I've seen in months. Everyone in my section was laughing."

The publicist dramatically said, "It's not a comedy."

You would think all the songs were written by the hosts of PROJECT RUNWAY because the show is driven by a "Dress for Success" theme. One palace observer sings "She is what the people want.."  More accurately, Diana is what the people were. That's why the underestimated working class millions loved her. Yes, she visited AIDS patients, shook their hands and walked through fields that needed to have land mines removed -- but she really made a mark and found her voice when she started wearing fabulous fashions by non-British designers. That's what the play implies

The song about "the F-You Dress" made my jaw drop as if I was a first-nighter in Mel Brooks' THE PRODUCERS watching the "Springtime for Hitler" number. 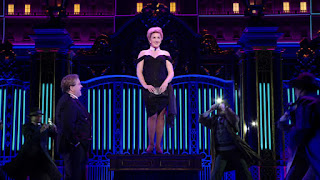 Nonetheless, I was impressed with the performance Jeanna de Waal gave as Diana. Her talent storms through the corn of this show like Oprah storming through the corn field in THE COLOR PURPLE. Broadway veteran Judy Kaye is mighty fine doing double duty as The Queen Mum and novelist Barbara Cartland.

DIANA; THE MUSICAL.  The late Lady Diana deserves something much better than this musical piece of cheese.