She had six Oscar nominations to her credit. All were in the Best Actress category. Deborah Kerr never won a competitive Academy Award. However, the Academy bestowed upon her an honorary Oscar in 1994. When I was in junior high school and saw her in THE KING AND I on network television one night, she immediately became one of my favorite actresses. 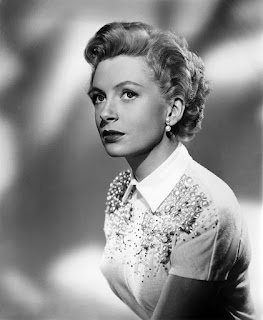 Kerr had a long film career that started in Great Britain. A few years ago, I found one of her early films on YouTube. I liked it. Well, I watched it again last night and I liked it even more. From the U.K. in 1942, the film is HATTER'S CASTLE co-starring Robert Newton and James Mason. To see Deborah Kerr and James do scenes together is a thrill. We go back to the Dickensian era of the U.K. to meet Steve Brodie. He's a shop owner and he makes men's hat. That's why he'd called a "hatter." Brodie is a rude, pompous, successful businessman whose moral compass was broken long ago. He's got two sweet children and an equally sweet wife, yet he's a tyrannical husband and father. His portrait should hang in a gallery of bad dads -- along with those of Noah Cross from CHINATOWN, Darth Vader from STAR WARS and Daniel Plainview from THERE WILL BE BLOOD. Brodie, played with unrelenting menace by Robert Newton, has more enemies than friends, he considers his unhappy home in Scotland a castle and he fancies himself a man who should be treated like nobility. Deborah Kerr plays his demure daughter, Mary. Brodie's wife is ailing. He allows her only limited visits and medical attention from the respected Dr. Renwick, played by James Mason. The compassionate, dedicated doctor stands up to the bully Brodie. We can see that the doctor has tender feelings for Mary. Those feelings are mutual. 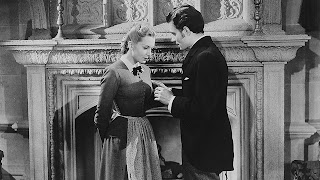 Brodie is emotionally and physically abusive. He's such a louse that, as his frail wife is ailing, he's shagging a tart of a barmaid on the side and keeping her supplied with pretty things. She manipulates him into hiring the other guy she's secretly seeing on the side as a shop clerk. The financially ambitious new shop clerk seduces his boss' demure daughter. Will Brodie find out? Will Dr. Renwick find out? Will the tart find out? You have to see for yourself. The events will not be pretty. They definitely will not be dull.
The seducer shop clerk, Dennis, is played with cordial deviousness by Emlyn Williams. Williams was sort of the Tracy Letts of his day. Letts has delivered solid screen performances as the stern Henry Ford II in FORD v FERRARI, as Fritz Beebe in Spielberg's THE POST and as Larry McPherson in Greta Gerwig's LADY BIRD. Letts is also a playwright who won a Pulitzer Prize for his drama, AUGUST: OSAGE COUNTY. Williams, as an actor, had an impressive list of screen credits from the early 1930s through the 1960s. He also wrote several plays. Two were adapted into popular films that were remade -- THE CORN IS GREEN (Bette Davis starred in the 1945 film, Katharine Hepburn did the TV remake) and NIGHT MUST FALL (Robert Montgomery starred in the original 1937 MGM film, Albert Finney did the remake).

HATTER'S CASTLE was Deborah Kerr's fourth film. The talent, the skill, the magic was already evident. She made demure interesting and intelligent. Eventually, the paternal abuse Mary received would form a steely independence that will serve her well. James Mason started doing films in 1935. By 1939, he was a leading man in British movies. As for Kerr, she did three roles so brilliantly in 1943's THE LIFE AND DEATH OF COLONEL BLIMP that it should've earned her an Oscar nomination. She really captured the attention of Hollywood producers and U.S. moviegoers in 1947 when BLACK NARCISSUS opened here in the U.S. and audiences saw her as the troubled nun who winds up in a dangerous situation. Paramount Pictures released HATTER'S CASTLE to American audiences in 1948. I bet that move was predicated by the success of BLACK NARCISSUS. MGM had taken notice of Deborah Kerr in the mid-1940s. In 1947, audiences saw her with Clark Gable in THE HUCKSTERS and with Walter Pidgeon in IF WINTER COMES. She'd relocated to Southern California and was under contract to MGM. 1949's EDWARD, MY SON with Spencer Tracy brought Deborah Kerr her first -- and well-deserved -- Oscar nomination for Best Actress.

She broke out of MGM, where she was somewhat cocooned in a "ladylike" image, and landed the role of the Karen, the adulterous Army wife, in Columbia's 1953 production, FROM HERE TO ETERNITY. She got her second Oscar nomination, the film won for Best Picture, and her Hollywood career took off with a variety of roles that showed what a great actress she was. Her other nominations were for THE KING AND I (1956), HEAVEN KNOWS, MR. ALLISON (1957), SEPARATE TABLES (1958) and THE SUNDOWNERS (1960). It didn't bring her an Oscar nomination, but her performance as the new governess in THE INNOCENTS (1961), a psychological horror drama, is superb.

By the way, the Academy should've honored James Mason with a lifetime achievement Oscar too.