With charm, he said that he would keep what he had to say "short and sweet -- which is kind of what I am." Actor Daniel Craig received a star on the Hollywood Walk of Fame this week and humbly expressed his thanks to film companies, film crew members, cast members, the crowd in attendance and his fans who were not there. NO TIME TO DIE opens here in the U.S. this weekend. It was delayed for 18 months due to the pandemic. The film is Craig's farewell to the James Bond franchise. It's his final outing as Agent 007.  By the way, NO TIME TO DIE runs 2 hours and 43 minutes. So, before you sit through NO TIME TO DIE, make time to pee. For my money, Daniel Craig turned out to be a pretty good Bond. 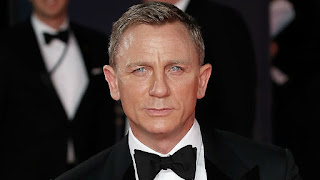 I became a Daniel Craig fan prior to his James Bond years and I want to give you a tip on one of those pre-Bond movies. Or maybe two.

Daniel Craig first grabbed my attention when I saw him in a slick British crime caper called LAYER CAKE. In that 2004 feature, he's like Veronica Lake in SULLIVAN'S TRAVELS (1941) and Marilyn Monroe in THE SEVEN YEAR ITCH (1955). He played a blond with no name. We never find out his name in the movie. Craig played a mid-level cocaine dealer who really wants to get out of the business. But things just don't go his way. He had a Steve McQueen-like movie star charisma that popped off the screen. That's when I took notice of Daniel Craig.

A bearded Daniel Craig is sweet, sensitive and sexy in a bold and mature 2003 British film called THE MOTHER. He plays the young man attracted to an older woman. A woman who has grown children. The woman is a widow who's been boxed in by society's determination of how she should look and behave. If May (played by Anne Reid) settled into being a home-bound, ordinary, sexless grandmother, her adult children would probably be cool with that. But May revives her love of drawing and, while reinventing herself, she catches the eye of the hunky man renovating her son's house. Unexpected romance ensues. Attention from a hot man proves to be a great beauty makeover for May.

An older woman/younger man affair was treated by Hollywood as something a bit twisted. Think of THE GRADUATE and Billy Wilder's SUNSET BLVD. Rarely have we seen with an older woman and a younger man having a great time together without getting a side-eye from society in a movie. One such movie is an indie film that was directed by and starred Oscar winner Helen Hunt. The 2014 comedy/drama, RIDE, has Hunt as the single mother who follows her son from Manhattan to Santa Monica, California. Like him, she comes to enjoy surfing. While surfing, new things come into her life.

In THE MOTHER, the widow who finds young love is in her 60s. Dig it! Of course, her grown children will be rocked by her reinvention. They will cause drama. Check Craig out in THE MOTHER and LAYER CAKE. If you never saw KNIVES OUT, make that a must-see too. He is fabulous as the Southern detective in that 2019 murder mystery comedy. It was one of the best, wittiest movies of that year. The detective, investigating the murder of a noted novelist, has to deal with a family of eccentrics.

There will be a sequel.

In a way, I'm glad Daniel Craig has said bye-bye to Bond because I love how he does comedy. As much as I liked him in the Bond movies, I liked him in KNIVES OUT even more. He was also very funny as a guest host on SATURDAY NIGHT LIVE. I hope he adds more comedy to his film credits. It would be totally cool to see Daniel Craig do something Monty Python-esque.