Picture this. You're a young actress. You attended a prestigious Ivy League drama school. You've booked your first role in a film. A major film. A film that will win the Oscar for Best Picture of 1977. However, the audience won't see your face and won't hear your voice. The romantic comedy is Woody Allen's ANNIE HALL. You appear in the last 5 minutes of the movie during a voiceover flashback. You are the new girlfriend of Alvy Singer (Woody Allen) and the both of you run into Alvy's former girlfriend, Annie Hall, with her new fellow outside a movie theater in Manhattan, Camera-wise, it's a long shot so the audience sees that you're taller than Alvy. But it doesn't don't see your face or hear your voice. Your name appears near the end of the closing credits:  "Alvy's Date Outside Theatre -- Sigourney Weaver."

Your next appearance comes two years later in a 20th Century Fox film. You get close-ups. You get dialogue. You get action scenes. Although you are still an unknown actress, you've landed the lead role of Officer Ripley, the highly intelligent and brave space vehicle crew member battling a huge monster in a new sci-fi horror thriller called ALIEN. The film will be such a box office blockbuster that it spawns a franchise. Your performance as Ripley in its first sequel, 1986's ALIENS, will bring you an Oscar nomination for Best Actress. 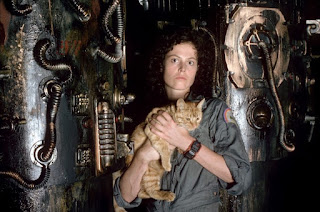 What a story! And what well-deserved fortune for Sigourney Weaver. I've had the privilege to interview her three times. She was, in a word, delightful. Our first encounter took place when she was promoting GHOSTBUSTERS (1984). Our second chat occurred on my VH1 prime time talk show when we was promoting her two 1988 releases, GORILLAS IN THE MIST, a drama, and the Mike Nichols' comedy, WORKING GIRL. 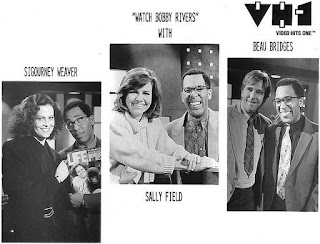 During our WNBC TV interview, I asked Sigourney Weaver to confirm something I'd read -- that, when she was a student at the Yale School of Drama, one of her male professors told her in class that she had no talent. Was that true? Her answer was "Yes." I asked her what her response to him was. Sigourney said she really had no quotable reply. She just sputtered something because she was so stunned, hurt and humiliated by what he said.

But she persevered with a belief in herself.

On the air, I reminded viewers that Sigourney Weaver is one of the few actors, male or female, to get two Oscar nominations in the same year. She was a Best Actress nominee for GORILLAS IN THE MIST and a Best Supporting Actress nominee for WORKING GIRL. And if some folks wanted to know what year she made that Oscar history, they could look it up in the library. At Yale.

I wonder how that male professor who humiliated Sigourney in class felt about her three Oscar nominations and her starring roles in some major Hollywood box office hits. That, in addition, to er being one of the best action movie heroes we ever saw on film.

Be like Sigourney Weaver. Believe in yourself and to hell with those who don't share your belief.

It's October 8th. Her birthday. I wish Sigourney Weaver a very Happy Birthday.