It had been a bit of a bumpy day for me. That night, I wanted to see something soothing with substance. I turned on NBC. Would I watch LA BREA, the network's new show? Well, I tried it for about ten minutes and lost interest when characters were running away from an abnormally large grizzly bear. It was the size of an Army tank. I switched over to ABC. The network's relentless Disney promotion overcame that night's edition of DANCING WITH THE STARS. All the contestants had to dress up like Disney villains. I went to Netflix. At first, I was going to watch the controversial new David Chappelle comedy special. But, when I clicked onto Netflix, I noticed a new documentary about one of America's greatest singers -- Ella Fitzgerald. I watched that...and I'm glad I did. It was just the tonic I was seeking.

Directed by Leslie Woodhead, ELLA FITZGERALD: JUST ONE OF THOSE THINGS is an enlightening and interesting 90 minutes full of amazing Fitzgerald performances. If you saw the painstakingly researched, richly informative 2000 documentary, JAZZ, A FILM BY KEN BURNS, this 2020 release seems like a chapter of the landmark project. That's a good thing. You will hear vocals by Ella Fitzgerald, hear her in interviews, and learn things about her that were not in the Ken Burns film. She was born with an extraordinary gift, a gift she shared with the world. 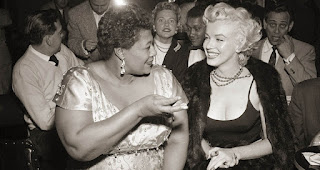 One thing about Burns' JAZZ mini-series on PBS that made me want to shout "Hallelujah!" was how he presented Louis Armstrong as a musical genius, a evolutionary master musician in the American art of jazz. In his 1930s and early 1940s Hollywood movie roles, he was not presented as such a great and important figure in American music. In the late 1980s, I hosted a weekend show on VH1 called "Sunday Brunch." On it, we played a music video with Armstrong singing "It's a Wonderful World." The visuals were clips from GOOD MORNING, VIETNAM starring Robin Williams. Armstrong's recording was in the movie's soundtrack. The record was popular. However, I often wondered if many of our viewer knew that Armstrong's musical history and brilliance dated back to recordings of the 1920s and 30s.

My parents loved Ella Fitzgerald and introduced me to her work. I loved Ella Fitzgerald. I had the joy and privilege to see her in concert. During my years at Marquette University in Milwaukee, she did a night in the city's elegant Performing Arts Center. This was the 1970s. She was in fine form. The audience loved her and she loved the audience right back. Having seen her in concert, on TV and having her records in my box of albums, I often wondered if she knew how great she was. Someone in the documentary wonders the same thing.

We're taken back to 1934 when Fitzgerald was a teen and performed in an amateur night at Harlem's famed Apollo Theater. We learn how the death of her mother devastated her and affected her life. We learn that she was a homeless teen for a time and abused. Her family had fled the racism of the South and migrated to Harlem which was also dealing with and punching back on racism. We also learn how, despite her stunning vocal artistry, the press stressed the fact that she was not slim and traditionally beautiful. She was fat-shamed.

ELLA FITZGERALD: JUST ONE OF THOSE THINGS explains her significance and genius establishing herself as a top vocalist of the Swing Era, being the rare female leader of a popular big band, and transitioning into BeBop with jazz artists such as Dizzy Gillespie.

We hear a number from her historic 1960 concert in Berlin that will dazzle you. She scats a 5-minute number that, today, would get a standing ovation on THE VOICE and AMERICA'S GOT TALENT. There are excellent comments and soundbites, some archival, from singers Johnny Mathis, Patti Austin, Tony Bennett, Cleo Laine and Smokey Robinson. Fine arts reporters, such as Margo Jefferson (threaded throughout the Burns' JAZZ mini-series) and music historians give solid information. We also see and hear from Ella Fitzgerald's son. His stories are very good. And he sings.

There's also a section on some terrific female sisterhood and feminism that, I'm sure, bothered male executives at 20th Century Fox. The studio's new star and reigning sex symbol, Marilyn Monroe, was a big Fitzgerald fan. Fitzgerald was on a high from the artistic success of her "songbook" albums, individual LPs on which she performed songs performed by one or a couple of specific songwriters such as Irving Berlin, Cole Porter, Rodgers & Hart, George & Ira Gershwin. However, there was racial discrimination when it came to booking talent in top Hollywood nightclubs. When Monroe heard that Ella Fitzgerald was pushed back by this discrimination, she went into her own Civil Rights action, utilizing her clout as a movie star. Fitzgerald was forever grateful.

If you loved "The First Lady of Jazz," take 90 minutes to see ELLA FITZGERALD: JUST ONE OF THOSE THINGS. In the Netflix documentary, Smokey Robinson recalls the first time he heard Ella sing. I vividly recall my first time. I was a very little boy. Mom and Dad were watching a romantic comedy from Paramount Pictures called BUT NOT FOR ME. It's a 1959 movies that starred Clark Gable, Lilli Palmer and Carroll Baker. Over the opening credits, Ella Fitzgerald is heard singing the title tune. I never forgot the loveliness of that voice. I listened.

You can listen to it now. Enjoy.