Now considered a classic in the filmography of director Quentin Tarantino, PULP FICTION opened nationwide this week in 1994. The crime thriller got Tarantino an Oscar for his screenplay and it was a nominee for Best Picture. Oscar nominations in acting categories went to John Travolta, Samuel L. Jackson and Uma Thurman.

I was invited to a preview screening before its national opening. The invitation came because I was scheduled to interview Travolta and Jackson for a local New York morning news show. Seeing the movie was part of my homework before the those interviews for that part-time TV job of mine. The screening room was a private one known to those who attended critics' screenings. It was located near Times Square. The early evening screening was delayed for about 10 minutes to allow for latecomers getting through rush hour midtown traffic. 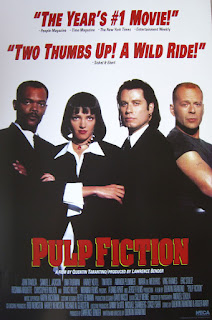 I was solo, sitting alone in a row that had available seats. PULP FICTION started. About 30 minutes into it, a network morning show news anchor walked in -- with an assistant -- and sat right next to me. We were acquainted. The anchor leaned over and whispered in my ear "What did I miss?"

The anchor let out several low moans of disapproval at some gritter scenes in the movie. Then network anchor -- with the assistant -- left about 30 minutes before PULP FICTION ended, saying into my ear "Too violent for me."

On the live network morning news program, with John Travolta as an in-studio guest, the anchor said "I loved the film." Travolta was very grateful.

I wished Samuel L. Jackson had been the live, in-studio guest. And I wished that I had told him what I just told you before he sat across from the multi-million dollar-making anchor for an interview.