Tony Curtis in FLESH AND FURY

Let me tell you up front. I am a definite Tony Curtis fan. I became an even bigger fan when I had the great privilege to interview him on live TV one weekday morning in 1999. I was on Fox5's popular GOOD DAY NEW YORK morning news show. He was in town to promote a special appearance he was doing on TCM (Turner Classic Movies) with host Robert Osborne. Curtis was lively, lovable and funny in our studio interview. The whole crew -- and many viewers -- were thrilled to see him. So, it was Saturday night last weekend. Very late Saturday night and I couldn't sleep. I found an old Tony Curtis movie from early in his career when he was an actor for Universal-International. It was a B-movie from 1952 entitled FLESH AND FURY. It was a B-movie melodrama but not at all boring. It held my interest for its 1 hour and 20 minutes. Curtis played a deaf/mute boxer who has the potential to become a champ. Curtis was major eye-candy back then with his movie star good looks and fine physique. 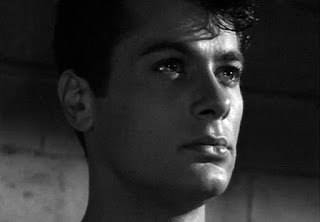 Curtis plays Paul Callan. When the story opens, he's in the ring. There's a hard-boiled blonde in the audience with a two-bit date. She's excited by Paul Callan as she yells "Go on! Get in there! Kill him!" She's Sonya, played by Jan Sterling. This is Jan Sterling after Billy Wilder's then-flop, now-acclaimed ACE IN THE HOLE (1951), in which she played a selfish blonde wife, and before she played a former floozie who's one of the passengers on the doomed commercial airliner in the 1954 box office blockbuster THE HIGH AND THE MIGHTY. In all three movies, Sterling played blondes who'd been around the block. Some movie dames have a heart o' gold. Sonya in FLESH AND FURY has a heart of cubic zirconia. 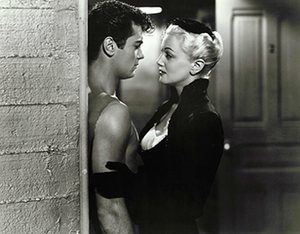 Sonya wants to meet Paul right after he wins that boxing match. In his locker room, she's on him like a skin graft. I kindly veteran manager (played by Wallace Ford) wants to manager Paul -- and does. Sonya realize that if 'Pop' Richardson wants to manage him, he must definitely have champ potential. That means big money which is exactly want Sonya wants.

The big surprise in this B-movie is how sensitively Paul's deafness and initial lack of speech is handled. Tony Curtis does a fine job in the part. He never overdoes it. If anything, he underplays like a pro for more effect. He brings us into Paul's world.

Paul becomes a better boxer under the guidance of his new manager, 'Pops.' Sonya is still Paul's manipulative girlfriend. Then he meet a sweet young lady who's a magazine writer. Not only does she want to do a feature on Paul, she knows sign language and utilizes that when they meet. Paul, we later discover, knows how to sign but just reads lips. He doesn't sign. As he and Ann start to fall in love, he tells her "I never like to sign because people laugh at me and call me 'dummy'." Ann is neither deaf nor mute. She comes from a well-to-do warm family. Her father was deaf and she learned how to sign. 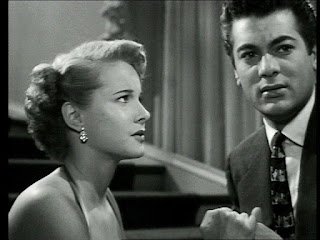 Later in the film, during his relationship with Ann, Paul is taught to speak which gives Curtis some dialogue in the final third of the film. Paul's hunger to box stems from his anger at being called 'dummy.' Says Paul, "I wanna fight. I wanna be champ."

Connie Gilchrist, one of those always-dependable supporting players, has a small role. She's probably most-widely remember for playing Nora the maid in AUNTIE MAME starring Rosalind Russell. Her character gets look at Sonya while Paul's training and says to 'Pops.' "The girl's no good."

Paul will come to realize that when she pushes him into a championship match before he's really ready. He's still dealing with an operation he had to cure one of his disabilities. Mona Freeman stars as Ann, the magazine writer.

With its deaf/mute angle, FLESH AND FURY is not a great film like THE MIRACLE WORKER but it wasn't set out to be. It's an entertaining B-movie designed to groom Tony Curtis for stardom. When 'Pops' the manager first sees Paul in the ring, he remarks "He's got the stuff." The same applied to screen newcomer Tony Curtis. I enjoyed this movie. 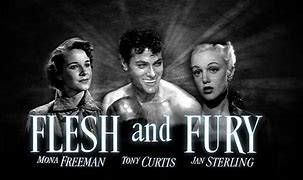