Have You Seen TED LASSO?

This is a new sitcom starring Jason Sudeikis, whom I loved when he was a SATURDAY NIGHT LIVE cast member and I loved his work as one of the horny teen-like middle-aged husband in 2011's HALL PASS. Sudeikis stars as the somewhat clueless soccer coach TED LASSO. I admit that I had not really paid any attention to the sitcom until it netted Jason Sudeikis a recent Golden Globe the Best Actor award for an actor in TV comedy series. The Critics Choice Awards followed the Golden Globes and he won in the same category in that awards competition. After that, the show came up during a March 8th interview CBS' Gayle King did of Nobel Laureate Malala Yousafzai. Malala will be producing content for Apple TV. While mentioning that she is not always serious and loves to laugh, she and Gayle both mentioned how much they love Apple TV's TED LASSO. That motivated me to make a point to watch an episode or two of the sitcom. 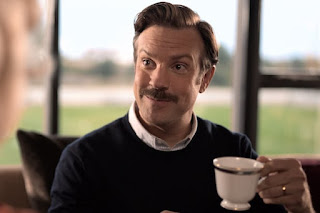 I watched three episodes and liked them. I laughed a lot. Ted Lasso is not just a loopy, fish out of water character who delivers punchlines. He coached college football in Kansas. Now he's been hired to coach a Premier League soccer team in England. Across the pond, soccer is called football. He's not familiar with British soccer, the sports terms or the customs. He cannot get used to tea. He prefers coffee. So how did he get the job? A tall, stately, glacially elegant and mistreated woman is now owner of the team. She took it over from her ex-husband,  a man who hooked up with several young ladies. His hormonal holidays with various women led to a divorce that made headlines in the British tabloids. Ted's boss secretly wants the team to fail and that failure will be part of her ex-husband's legacy. That's why she hired the inexperienced Lasso. 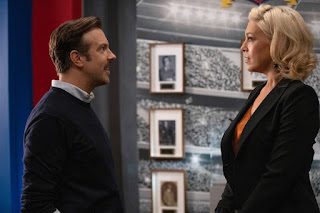 Whereas the executive lady is devious, deceptive and manipulative, Ted Lasso is just the opposite. He's an unsophisticated but warm-hearted eternal optimist. "I do love a locker room. Smells like potential," he says when he enters the soccer team's locker room. The team and the press have already made up their minds to dislike him. The team is talented but undisciplined. However, he can key in to a team member's true self. The team locker room attendant who's grown accustomed to being bullied, is treated with respect and friendliness by Lasso. He's treated like a member of the team. Lasso could change the team's spirit and thwart his boss' plans.

About Ted Lasso, there's some heartbreak in his life that he realize in the first episode and wait to learn about in future ones. He places a phone call to America. We take it he's speaking to his little boy. He says "I love you." He tells his son to put his mother on the phone. We get the feeling that she treats the call as an inconvenience. Nonetheless, Lasso says "I love you" to her too. We can tell those three sweet words are not said back to him.

To keep a sense of optimism and good humor when you sincerely say "I love you" to someone and you don't hear those words returned to you is not easy. I know from personal experience.

Jason Sudeikis deserved those awards. If you have the spare time, TED LASSO is worth a look. It's a good, smart ensemble sitcom. One more thing -- British actress Hannah Waddingham is terrific as Ted's boss, Rebecca.