About a week ago, the friend of a friend recommended a short documentary to me, one that is currently an Oscar nominee. This 2020 release is entitled COLETTE and it runs only 25 minutes. Those 25 minutes left me awed and devastated. I was more moved by the raw pain and powerful lessons of this short documentary than I've been by some pompous 2-hour movies. If you're one of those many lovers of the classic film, CASABLANCA, you need to see this documentary. Colette is a sharp 90 year-old woman who was a member of the French Resistance. So was her beloved brother, Jean-Pierre. In 1940, France surrendered to Germany and was then occupied by the Nazis. She describes her brother as brilliant, charming and "made of steel." He too was a member of the French Resistance. Tragically, he was arrested at age 17 and sent to a concentration camp in Germany. Since 1945, Colette Marin-Catherine, a well-dressed and attractive woman who looks a good 20 years younger than she is, has refused to visit Germany, A young history student who works in a museum coaxes Colette to visit the concentration camp. 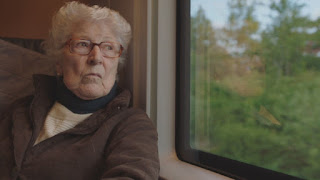 The trip and the visit will bond the two women closely. As Colette predicts before the trip, "I won't ever be the same." We see that the two new friends will never be the same. The history student works with Holocaust history. She had details on Jean-Pierre's time in Mittelbau-Dora concentration camp in Nordhausen, Germany.

Colette does not hold back. Her anger and grief are strong and hot still. She is frank talking about herself and her family during the Nazi occupation. We see footage of prisoners in concentration camps. In the museum where the student works, we see prison outfits worn by concentration camp prisoners from France. We see an outfit with a pink triangle pinned on it. The pink triangle was the way Nazis identified homosexual males. The pain of an opened wound  rushes out while Colette dines in a restaurant in Germany. The former mayor of Nordhausen is present and begins to speak dramatically to the crowd, apologizing for Germany's crimes and honoring Colette. She doesn't want to hear his speech and says so forcefully. She's not yet visited the concentration camp site. Here's a trailer.

Colette faced fascism and never forgot its horrors. She is a living lesson to the young history student. And to us. Her beloved brother, Jean-Pierre, died a prisoner on March 22nd, 1945.

If you can find this 25-minute documentary. I urge you to see it. COLETTE comes from filmmakers Anthony Giacchino and Alice Doyard.