I'm sure a lot of us baby boomers have been Stanley Tucci ever since we saw him in a blue jeans commercial on TV back in the 80s. This was before he hit as a popular, talented TV series and film actor. You can always count on Tucci for a good, nuanced performance. Two of my favorite film performances of his show him as a loving spouse who makes marriage look fun. There was his role as the dad/husband in the delightful teen comedy, EASY A, a 2010 release that helped launch Emma Stone to stardom, and Nora Ephron's JULIE & JULIA with Tucci has the husband of famed chef Julia Child opposite Meryl Streep as Julia. He's a loving spouse whom you know has made his 20-year relationship fun in a new drama called SUPERNOVA. 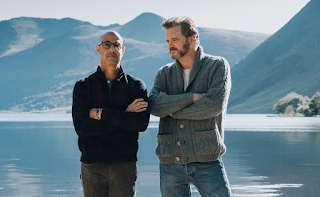 Delroy Lindo of Spike Lee's DA 5 BLOODS and Riz Ahmed of SOUND OF METAL have been mentioned by critics as definite Oscar nominees for the Best Actor Oscar this year. To me, Stanley Tucci also deserves consideration for a Best Actors Oscar nomination for his performance in SUPERNOVA. 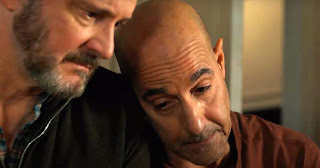 As the film opens, we see two middle-aged men in bed asleep. One is naked. One cuddles the other. Then we see them on the road in a motorhome. The two men, Tusker and Sam, have been together 20 years. Tusker, played by Tucci, is the American he fell for a Brit, played by Colin Firth. Sam is driving and, as the wheel is on the right side, we know they're motoring overseas. They're in England. Tusker, a writer, has a telescope and loves to look at the stars. Sam is a pianist. You can tell these two have a well-seasoned relationship. The squabble, they laugh, they get a little bored with each other, they embrace and love each other more than anything else in the world. As Sam says, "I want to be with you every moment."

On the road, while making small talk, Tusker is sweetly ignoring Sam and focused on a map. One puts on some music. It's an oldie. Tusker says to Sam, "Where were you in the 70s?" This seems like a warm, ordinary marriage. But it's changed. Tusker has shown signs of the onset of dementia. Tusker has been prescribed medication. He's aware of his condition. So is Sam. So is Sam's family they are motoring to visit. Sam's big, loving family loves Tusker too. Sam is lucky to have such a supportive, welcoming family.

With that diagnosis, SUPERNOVA never gets maudlin. It doesn't focus on the illness as much as it does on the spouse/caregiver and how the couple will keep a balance for the rest of its time together.  Tusker and Sam have been together loving each other for so long, they're practically one unit. They go through the typical, ordinary things in daily life yet, while doing something ordinary like making dinner, we see the pool of pain in Sam's eyes.

I lost my partner to AIDS in 1994. While making dinner in the motorhome and making small talk with Tusker, Sam goes into the bathroom. He cries at the fact that those sweetly mundane moments for them are limited because of an alien entity that has invaded his loved one's body. An alien entity that he cannot cast out. He can only deal with it. I had that same kind of moment in my relationship. I knew what Sam was feeling. 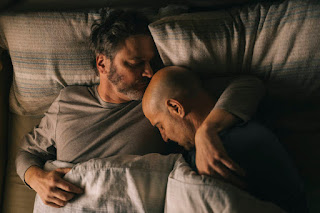 I'm guessing that the two lead actors have been friends for a significant amount of time. They are quite comfortable in their intimacy and very believable as a longtime couple. They way they look at each other, they way the hold each and cuddle is so honest and natural. Stanley Tucci is at the top of his game in this performance. He's moving and memorable. SUPERNOVA opens January 29th and it feels perfectly timed for this pandemic age. More than being the story of a man with a disease, SUPERNOVA reminds us, as Tusker wrote, "...how lucky we are to have each other." This love story of two men reminds us what a blessing it is to have a loving group of family and friends in our lives. Family and friends who stay in touch and make you feel special in their lives. As heartbroken as Sam is, he is not alone in handling his crisis. SUPERNOVA is a tender road movie written and directed by Harry Macqueen.

The film runs 94 minutes. I recommend SUPERNOVA, a love story with beautiful performances from Colin Firth and Stanley Tucci. By the way, here's the jeans TV commercial Tucci did back in the 80s.

Tucci is shirtless in SUPERNOVA for one scene. The man is 60 and he makes 60 look really good.