About SOUND OF METAL

Happy New Year. I hope you're well and I wish you the absolute best for 2021. Last year was like a grueling, extreme stress test. I was hit with an unexpected health crisis that put me in the hospital for a couple of days. I had major surgery in October. That experience, followed by my recuperation, gave me a greater appreciation for my wonderful sister and cousin. Their constant attention and love lifted my spirits in that soul-bruising year of a pandemic and dark politics from the White House. Now I'd like to recommend an Amazon Original Movie I saw in which the lead character was hit with a sudden physical crisis that forces him to consider undergoing major surgery. SOUND OF METAL is the name of the film and it boasts some very fine performances. It features two British actors who, I'd swear, had grown up in Southern California considering the performances they gave in this West Coast story. London-born Riz Ahmed is exceptional as the punk-rock drummer with a band who realizes that he's going deaf. The constant loudness of his profession may have accelerated his hearing impairment. 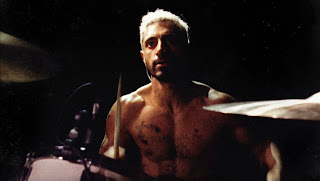 Ruben the drummer has a North Hollywood blond hair style, a tattooed torso and he works shirtless. The singer with the band is his girlfriend. There's more to these two characters than we see in their punk-rock club performance. Ruben's RV is his home on wheels. The inside is neat, organized and tastefully decorated. His musical tastes runs from classic Bessie Smith blues to 70s soul. While Lou, his girlfriend and the band's singer, sleeps, Ruben exercises. Then he fixes them healthy shakes and a lovely breakfast. Lou is a loyal, honest, intelligent woman -- honest about herself and about Ruben. As musicians. they hit the road for gigs. There are scenes where we see Ruben's bus-like RV is the only vehicle in a parking lot or heading down  a long stretch of road. Ruben is like his RV in those scenes. He wants to go it alone on his road of life. Yet he has this physical disability. Lou knows that he cannot be loner with that physical crisis. He needs to connect to a new community for survival, education and emotional growth. He finds such a community -- a deaf community with a wise, compassionate counselor who's a Vietnam war veteran. Ruben has to learn how to be deaf. Also, he wants cochlear implant surgery to restore his hearing. That surgery is very expensive and not covered by insurance. Raising the money for such a procedure is a challenge. Another challenge, as he learns from the counselor, is to embrace and learn from the stillness the way he embraced the noise of the world. The noise has kept him from hearing the truths of his own wounded, angry soul.

In addition to Riz Ahmed's very fine work, there are the equally exceptional performances from Paul Raci as the Vietnam War vet and British-born Olivia Cooke as Lou. She's excellent opposite Ahmed. 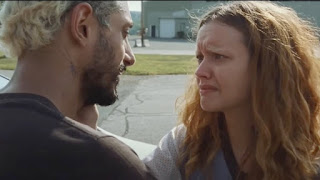 Riz Ahmed has an acting talent that's magnetic. I felt its pull when I saw him as the hard-luck assistant to a mentally imbalanced local L.A. news stringer (one who provides freelance footage) in 2014's NIGHTCRAWLER starring Jake Gyllenhaal. Ahmed is again magnetic as the deaf drummer in SOUND OF METAL.
at January 05, 2021