I had a happy hangover one day thanks to Martha Raye. The revue show 4 GIRLS 4 had returned to Milwaukee in the 1970s. The four girls were Rosemary Clooney, Rose Marie, Margaret Whiting and Helen O'Connell. It played for a hit week the previous year at the city's lovely Performing Arts Center. I met Rose Marie that previous year after a press conference. After the question and answer business, there was a buffet for the press. I wound up casually chatting with Rose Marie. She liked my sense of humor, gave me some immediate career advice (I worked on local radio then) and became a mentor. By the way, her advice was spot on and we kept in touch via letters through the years. She wrote me that she had another gig and wouldn't be in the return engagement. Martha Raye would be. She added that I should get ahold of Clooney and Whiting and have dinner with them. I did -- and Martha Raye came along. A Milwaukee buddy who is now a well-known TV/Radio celeb in Milwaukee was present. Gino photographed Rosemary Clooney, Margaret Whiting and me. After the show and after dinner, those two ladies were pooped and headed back to the hotel. Martha Raye turned to Gino and me and said, "Let's go get a nightcap." Wheee! 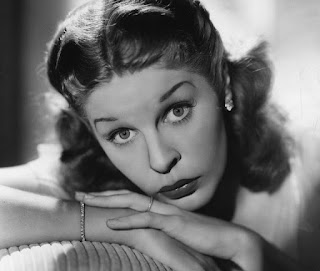 In the 1970s, we knew Martha Raye as the funny lady who did lots of special guest appearances on network TV shows and also did commercials for Polident. In my childhood, before I moved to Milwaukee for college and a career start after graduation, Mom told me that Martha Raye was a really good jazz singer and not just a comic entertainer. Mom said that she wore out her record of Martha singing "That Old Black Magic" back in the day and had to buy another one. 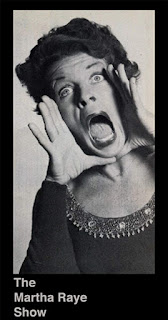 I think my generation remembers Martha Raye mostly as the funny lady with the big mouth in her later years when she was on Broadway and TV.  Many TV viewers then weren't aware of the great regard she had in the jazz community. During our nightcap, Martha Raye talked about her years at Paramount Pictures (in the 1930s) and broke us up laughing with stories about stars on the lot. She loved Harlem and was very proud to have played the Apollo Theater.

If you see what Martha Raye did in 1937's DOUBLE OF NOTHING, you see why she was a hit in Harlem. With Bing Crosby and Frances Faye, Martha jammed in the "After You" number.

Don't forget that Martha Raye, with her talent for physical comedy, was one of Charlie Chaplin's leading ladies.  In his 1947 black comedy, MONSIEUR VERDOUX, she's the new bride who doesn't know that the dapper Parisian gent she married wants to knock her off for her money. Just as he did his other wives. Here's a clip.

Mom and Dad used to listen to a Sunday afternoon jazz show on FM radio in Los Angeles when I was almost a teen. It was hosted by jazz historian Leonard Feather.  He played wonderful jazz cuts and had wonderful guests in the studio to interview live.  One day, his in-studio guests were Sarah Vaughan and Carmen McRae. Leonard Feather asked them to name some of their favorite vocalists. Sarah said she was going to name someone listeners might be surprised to hear, but Carmen McRae would agree with her. Sarah Vaughan named Martha Raye and Carmen McRae did, indeed, agree immediately.

Mom was right. Treat yourself and listen to Martha Raye sing "Stairway to the Stars."

I'd include a couple of stories Martha Raye told me over cocktails, but they're delightfully R-rated. I'll tell you in person.