Am I a Robert Redford fan? Yes, indeed I am and have been since I was in high school. Today, August 18th, is his 83rd birthday. On Twitter, IMDb (Internet Movie Database) assembled a short montage of Redford clips highlighting his work as actor and director.  IMDb asked "What's your favorite Redford film?" Fabulous actress Yvette Nicole Brown (she made us laugh on the sitcom COMMUNITY) gave a quartet in her online answer: ALL THE PRESIDENT'S MEN, THREE DAYS OF THE CONDOR, BUTCH CASSIDY AND THE SUNDANCE KID and THE WAY WE WERE. 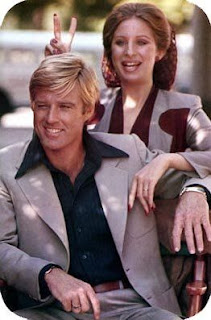 Yes, Yes, Yvette! I agree with those choices. I have two others to recommend. First of all, Robert Redford films represented fun Saturday afternoons at the movies during my South Central L. A. youth. My student discount card got me into the double features with a few cents off the usual ticket fare for teens. I sat with popcorn, a soda and Milk Duds to watch him in BAREFOOT IN THE PARK, THE CHASE and BUTCH CASSIDY AND THE SUNDANCE KID. One of his films didn't get a warm reception from critics, but it's special in my personal family history. I was -- and still am -- a hardcore Natalie Wood fan. Our parents were separating and I felt from the psychic energy in the house that Mom and Dad would definitely be getting a divorce. Before they separated, there were times Dad would get out of house to break from the non-verbal tension between him and Mom that added a thick emotional humidity to the indoor atmosphere. Most of the times, he'd go to his mother's place in Inglewood. One evening, he wanted to go to a movie. He invited me along and he let me pick the movie. I don't think the film was important to him. He just wanted to get out of the house for a white. I picked INSIDE DAISY CLOVER starring Natalie Wood with movie newcomer Robert Redford in a supporting role as Daisy's movie star husband. It was a glossy, deluxe production that was beautifully photographed. Natalie Wood gave it her all even though, as a rebellious but talented 16-year old tomboy whose singing talent gets her discovered by Hollywood, she was 10 years too old for the part. INSIDE DAISY CLOVER was the last movie Dad and I saw together, just the two of us, before he and Mom officially separated and he moved out of the house. I was teetering on the brink of teen-hood. Critics may have dismissed the movie, but I didn't. There's a scene in which Daisy, now an unhappy teen movie star, has a soundstage looping session for a scene in one of her musical numbers. She suffers an emotional breakdown in the booth. Her singing is suddenly, unexpectedly replaced with screams. If you've seen INSIDE DAISY CLOVER, you know the scene.

That scene reflected how I felt inside. But being the good student and Black Catholic dependable child, I could not let that rage out. Even today, seeing Natalie Wood and Redford in INSIDE DAISY CLOVER takes me right back to those emotionally bumpy middle school years. 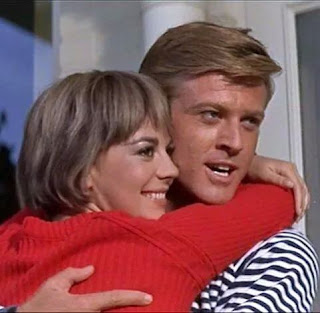 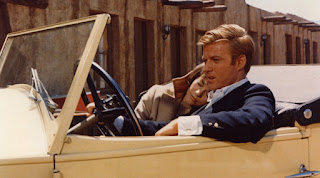 Robert Redford won the Best Director Academy Award for ORDINARY PEOPLE. The film also won a Best Screenplay Oscar, Timothy Hutton won for Best Supporting Actor and ORDINARY PEOPLE took home the Oscar for Best Picture of 1980.  To me, 1994's QUIZ SHOW is even better and brought him another very well-deserved Oscar nomination for Best Director. It's based on the true-life NBC game show scandal of the 1950s. Game show contestant Charles Van Doren, played by Ralph Fiennes, was in a fixed position to win because his good looks produced good ratings. He was handsome compared to his opponent, Herb Stempel. The real Charles Van Doren died this year, in April, at age 93. John Turturro is terrific as Herb Stempel, the plain but honest opponent. The real Stempel is now 92.

Take another look at Redford's QUIZ SHOW. It's a tale of truth vs. ratings, looks vs. substance. We see this played out within the medium of network TV. Charles Van Doren knew the game was rigged to capitalize on the increased ratings thanks to female viewers swooning over his charms. 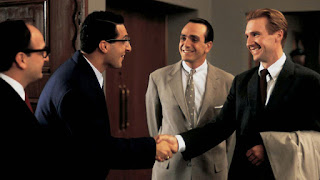 I don't mean to be snarky but watch it now that NBC had survived another scandal. In the fall of 1992, I worked on a local WNBC news program with Matt Lauer. He and I were acquainted with each other's work on a 1980s weeknight entertainment magazine show called PM MAGAZINE. It was syndicated. Matt did not have a noteworthy, extensive hard news journalism background. He was a good host of entertainment programming. However, he was in a career slump and sorely in need of employment. A buddy helped him score a local news anchor job on WNBC. I asked Matt how he was navigating through this new job as he'd not been known previously as a news anchor. He casually, honestly replied, "I look good and I read well."

Local female viewers went gaga over his handsomeness. Just two months after the premiere of our local weekend news program, Matt was taken off co-anchor duty because he was being groomed for TODAY Show stardom. Female viewers boosted ratings when they saw Matt. Before the 1990s ended, he was occasionally anchoring the network evening newscast and, later, he replaced Bryant Gumble as Katie Couric's co-anchor on TODAY. He morphed into a serious journalist and made millions until a sex scandal got him fired in 2017. Here's a trailer for QUIZ SHOW directed by Robert Redford. I highly recommend this 1994 film.
Another film I highly recommend came out in 2013. If Redford had received a Best Actor Oscar nomination for ALL IS LOST, I would have cheered. He did this film in his 70s and performed most of his own stunts as the aging mariner on a solo voyage. An accident happens, his radio and navigation equipment are broken. He's lost in the Indian Ocean. There's a tiny bit of dialogue in this movie and one big outstanding performance from Robert Redford. Here's a trailer.

Those first times I saw Robert Redford on the big screen, he looked like he'd been kissed in his cradle by the Southern California gods. He was the walking essence of the SoCal Look. Redford was a new Hollywood Golden Boy. Even if the movie was not about him, he got top attention. In the newspaper ads and the trailer for 1969's TELL THEM WILLIE BOY IS HERE, he's seen foremost. But Willie Boy, the native American who returns to his reservation, is played by Robert Blake. OUT OF AFRICA, directed by Sydney Pollack, is about the Danish baroness who finds her independence in Africa. It's about the woman played by Meryl Streep. But who gets top billing in the credits? Robert Redford.

Redford proved to be more than just another "pretty face." He was a serious actor, director and producer who was also graced with movie star charisma. If you haven't seen them already, let me know what you think of QUIZ SHOW and ALL IS LOST after you watch. I'm going to watch ALL THE PRESIDENT'S MEN again and pray that the history in the final scene of that investigative journalism drama repeats itself. (Be prepared for adult language in this clip).