I am still thankful to my big movie critic and film enthusiast buddy, Mike Sargent, for urging me to see a film by director and screenwriter Sara Colangelo. Her 2014 indie film, LITTLE ACCIDENTS, made me tense and made me tingle. It was that good. Sara Colangelo has a new film currently on Netflix. She gave me that same thrill again. THE KINDERGARTEN TEACHER is a compelling drama about a Staten Island teacher who seems as nice and safe as a beige cable knit sweater on the outside but, underneath, she's simmering with obsession and irresponsibility.  Maggie Gyllenhaal plays the teacher and she's terrific in the role. Before I tell you more about THE KINDERGARTEN TEACHER, let me tell you something about LITTLE ACCIDENTS. That was a revelation to me mainly because of actress Elizabeth Banks. I'd known her solely from comedy work in episodes of sitcoms such as 30 ROCK, SCRUBS and MODERN FAMILY. We currently see her at the vivacious host of the new ABC game show, PRESS YOUR LUCK. The dramatic work Elizabeth Banks did in LITTLE ACCIDENTS is a knock-out. She played the conflicted wife of a mining company executive in a small town.

Taking responsibility. Admitting the truth. Those are not always easy things to do. But they are things we need to do at critical moments in our lives. We see characters grapple with those needs to do the right thing in LITTLE ACCIDENTS. A mining disaster occurred. Were safety precautions in place? This happened in Appalachian territory where the blue collar folks work despite potential danger because they live paycheck to paycheck. They need the money. 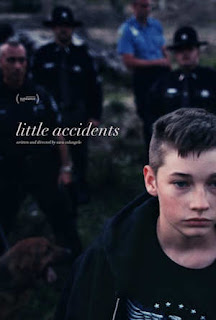 Slim, soft-spoken Amos (played by Boyd Holbrook) is the lone survivor of the mining tragedy. The town is in grief. Next, the young son of the mining executive and his wife disappears. The town experiences heartbreak on top of heartbreak. Also, there's anger. Could the mine have been safer? Was the executive irresponsible? Will Amos have to testify? The financially comfortable executive and his wife must keep up a caring appearance for the town. We sense emotional distance in their marriage. 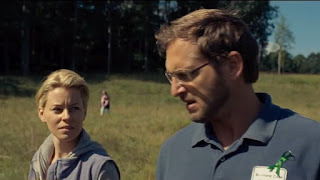 Diana (Elizabeth Banks) and Amos, the lone survivor of the mining disaster, are drawn together as secrets come to the surface.

Some of the same themes exist in THE KINDERGARTEN TEACHER. The Staten Island community where schoolteacher Lisa Spinelli (Maggie Gyllenhaal) lives has a small town feel. She's married and has three kids in high school. She teaches in New York City. After work, she takes a creative writing poetry class. Her poetry is pleasantly mediocre. One of her kindergarten students is a little boy who's sort a kid slam poet. He recites a poem out loud one day. It's short, lively and deep. She writes it down. 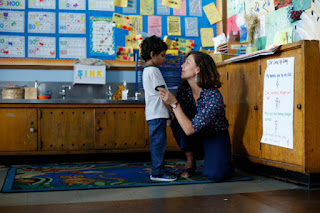 She takes it to her creative writing class -- and reads it aloud claiming that she wrote it. Her teacher (played by handsome Gael Garcia Bernal) loves the poem. He's excited by its vibrancy. We, of course, cannot believe she had the nerve to do what she did. 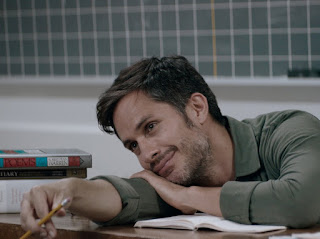 She does it again. The teacher is again impressed. Mrs. Spinelli now starts telling the kid's relatives that they have a little Mozart on their hands and she can do a lot with him. She wants more poetry from the boy. She separates him from the rest of the class for private meetings. She gives him a cell phone with her number. She starts lying to separate him from family members. The teacher and the boy take cultural trips together in New York City. During the trips, she tells him to turn off his cell phone so no one can bother them. She lies to his relatives. She takes the boy to places in Manhattan without their permission. She lies to her creative writing teacher, claiming these mature poems are hers when they're really from a kid in kindergarten. She starts lying to her sweet pudgy husband. At the same time, she's determined to control the lives of her teen kids. Lisa Spinelli reminded me of something I've learned from personal experience: People who try to control the lives of others do so because they have no control over themselves. The teacher becomes a stalker. Think of AMADEUS, the 1994 film. If little Jimmy is another young Mozart, as she sees him to be, then she is Salieri.

As in Sara Colangelo's LITTLE ACCIDENTS, THE KINDERGARTEN TEACHER looks at taking responsibility and admitting the truth. We see a marriage in which there's emotional distance. Here, it's been imposed by the wife and mother.

I got an extra disturbing vibe from THE KINDERGARTEN TEACHER because the little boy poet, Jimmy Roy (played very well by Parker Sevak) is a minority. He and his relatives are people of color. Mrs. Spinelli is white. At first, she is helpful. Then what she does smacks of supreme cultural appropriation followed by white entitlement. She assumes she will be better for the minority kid than his own relatives are. She will be Jimmy Roy's White Savior -- and the credit she'll get for that will give her life substance and make her seem more talented than she is. Take a look at the trailer.

THE KINDERGARTEN TEACHER runs only about 95 minutes long. It's another good work from director and screenwriter Sara Colangelo.
at August 09, 2019