A Celebration for Buster Keaton Fans

My mom introduced me to the exquisite silent screen artistry of Buster Keaton.  When I was boy, the networks had light early Saturday morning programming which would lead into the Saturday cartoon shows for kids. Channel 2, our Los Angeles CBS affiliate, often showed the optimistic Eddie Cantor musicals of the 1930s, Laurel & Hardy features and Buster Keaton comedies. Mom happily urged me to watch Buster. One thing that amazed me about him was that he did such wonderful work before movies learned how to talk and he was still in the game. I grew up seeing him in TV commercials, guest appearances on popular TV shows like CANDID CAMERA and in big screen colorful, hip comedies like the film version of Broadway's A FUNNY THING HAPPENED ON THE WAY TO THE FORUM (1966). He went from the silent screen era in the 1920s... 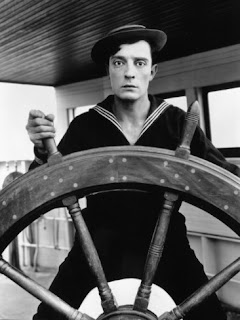 … to getting big laughs in a 1966 musical comedy that gave us numbers with an MTV music video style of editing years before MTV was born. 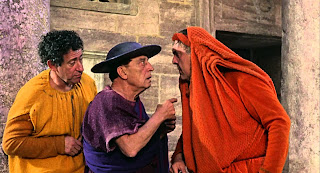 In college, Buster Keaton's silent film work was included in my Film Journalism classes. It was in our textbooks and in the lectures from our professor. In SHERLOCK, JR. (1924), THE NAVIGATOR (1924), THE GENERAL (1926), COLLEGE (1927) and STEAMBOAT BILL, JR., he was a marvel. Buster Keaton's athleticism and agility made his body alone one of the most memorable special effects in Hollywood history. Although called "The Great Stone Face," there was a constant flow of emotion in his eyes. There was depth and heart in that stone face. What a remarkable actor.  As a director, his creativity was astounding.

Director Peter Bogdanovich never got to meet and express his affection for Buster Keaton, but he did put it in a very good documentary. It's THE GREAT BUSTER: A CELEBRATION. You can find it for a small fee on YouTube and Amazon Prime Video. I hope this doesn't ruin it for you, but one of the most wonderful things about the documentary is that it has a happy ending. Keaton was in a lovely marriage and he was employed. The documentary goes back to his beginnings in a stage act. The origin of his nickname comes up as does his introduction to the silent film scene. We see his artistic zeniths -- not all of them appreciated at the time -- and we see his artistic nadirs -- during his MGM years which is a case of corporation versus art, it seems. The prestigious studio took itself seriously and did not have the knack for giving us good wacky and slightly anarchistic comedies like we got from the Marx Brothers during their Paramount years. MGM took away Keaton's freedom as a filmmaker. He was better off as an independent. Keaton had some tough years artistically and personally. Then he bounced back in the TV age.

If you're a Buster Keaton fan, you should see this documentary. It's informative, revealing, surprising and entertaining. Bogdanovich is the narrator.

My one criticism is the same one I raised when I saw the HBO documentary, SPIELBERG.  That 2017 documentary from director Susan Lacy (of excellent PBS documentaries) is also informative, revealing, surprising and entertaining. However, in its 2 and 1/2 hours, we saw and heard from seven film critics/film historians -- and all of them were white. Not one African-American film journalist is seen even though one 10-minute section of the Steven Spielberg documentary is devoted to discussing his film adaptation of THE COLOR PURPLE.

In THE GREAT BUSTER: A CELEBRATION, we see beloved film critic & historian Leonard Maltin. We see top celebrities who praised Keaton's artistry. We see Carl Reiner, Mel Brooks and Dick Van Dyke. We also get a few soundbites from Johnny Knoxville, host of the MTV prank and gross-out show, JACKASS. The show's popularity later gave us JACKASS: THE MOVIE.

There's not one African-American Buster Keaton fan, not one person of color, giving comment in Bogdanovich's 2018 documentary. The Keaton fans seen in THE GREAT BUSTER: A CELEBRATION are all white.

Buster Keaton did not have only white fans.  I've been proof of that since I was in grade school.

I'm a veteran entertainment news reporter with radio, print and TV credits. Here's something I noticed. After its run in movie theaters, the 1999 comedy, THE BACHELOR, made its network TV debut on ABC. THE BACHELOR starred Chris O'Donnell and was a remake of a 1925 Buster Keaton silent screen comedy called SEVEN CHANCES. In that classic, Keaton plays a man who must marry by a certain time on his 27th birthday in order to inherit $7 million from a relative. When that news gets out, dozens of women are ready to say "I do" -- if they can catch him. The 1999 remake recreated this famous scene from the 1925 Buster Keaton original. He's being chased by women in wedding dresses. 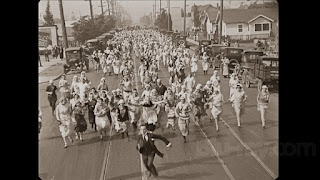 In 2002, months after the ABC airing of 1999's THE BACHELOR, we saw the premiere of a new reality competition series called...THE BACHELOR. Several women compete for the same guy. The goal is matrimony. I think a bit o' Buster Keaton inspired that ABC franchise.
at August 20, 2019