With THE NAKED CIVIL SERVANT

I thank Heaven for the opportunities I've had to meet extraordinary people during my TV.  Many were people that I never dreamed I'd see in person much less engage in conversation.  One such surprising example happened at a New York City dinner party in the mid 1980s..  I cannot for the life of me remember what we had to eat.  I do vividly recall that I was seated next to a chatty and colorful  Sylvia Miles.  The character actress played the middle-aged blonde Manhattan hooker who hustles the clueless hustler Joe Buck in the film classic, MIDNIGHT COWBOY.  Sylvia's perfectly vulgar portrayal brought her an Oscar nomination for Best Supporting Actress of 1969.  When dinner ended, we all left to go outside and find our modes of transportation home.  I was on the sidewalk with my hand up to hail a cab.  On the street, there were more folks wanting cabs than there were cabs available.  Finally, one was headed towards me.  I noticed that an older gentleman was a few feet away from me.  He'd been one of the other dinner guests at our table.  He was also hailing a cab.  His ascot seemed to flow down to his kneecaps.  He wore his large, unique hat with a distinct élan.  I timidly asked if I could give him a lift.  He gratefully and graciously accepted my offer. 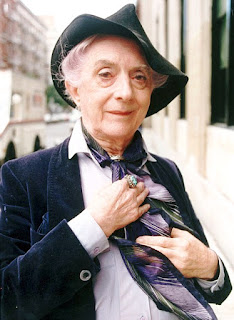 It was Quentin Crisp. Yes, the famous and flamboyant British writer and storyteller who became a gay icon.  One of his his books was his 1968 autobiography called THE NAKED CIVIL SERVANT. 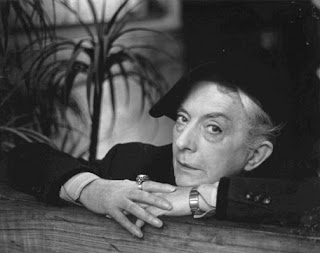 I introduced myself and told him we were both at that long table for the same dinner party.   I called him "Mr. Crisp."  He told me to call him "Quentin." He, with his distinct vocal cadence, smiled and talked about how much he loved dinner parties and meeting new people.  He loved New York City.  As he spoke, I was absolutely stunned.  I was stunned that I was with him in the backseat of a New York taxi and all I could think was -- "Damn!  Actor John Hurt was brilliant.  He did Quentin to a T on television in THE NAKED CIVIL SERVANT!"
Actor John Hurt.  Last month, just one day after I'd seen him as a priest opposite Natalie Portman as Jacqueline Kennedy in JACKIE (for which Portman is now an Oscar nominee), I heard the radio report that Sir John Hurt had died of cancer at age 77.  What a marvelous actor he was.  He became the person he played.  I first noticed him in 1978's MIDNIGHT EXPRESS.  That harrowing Turkish prison escape tale is based on the true story of my longtime buddy from college, Billy Hayes.  Hurt played one of Billy's fellow prisoners and, for his work, Hurt was an Oscar nominee for Best Supporting Actor of 1978.

Billy loved John Hurt.  The only thing about he didn't love -- but totally understood as an actor's preparation -- was that Hurt didn't shower frequently as part of his process for bringing truth to the character.

Then next year, 1979, John Hurt just about scared the black off me in a movie theater when he became a human egg at a spacecraft dinner table and suddenly, shockingly hatched an evil ALIEN.  What an amazing list of big screen credits John Hurt had:  MIDNIGHT EXPRESS, ALIEN, 1966's A MAN FOR ALL SEASONS, THE ELEPHANT MAN, SCANDAL, and his role as Mr. Ollivander in the HARRY POTTER movies.  Hurt wasn't highbrow either, which is probably why we loved him so much.  He breaks me up as Jesus in Mel Brooks HISTORY OF THE WORLD: PART 1.  He's Jesus and Mel plays the waiter at the Last Supper.  At a time when most actors were still shying away from playing openly gay characters in movies, Hurt played one in a comedy crime story.  The 1982 film is called PARTNERS.  Hurt plays the shy gay cop assigned to work an undercover case with a very macho hetero police detective played by Ryan O'Neal.  They have to pose as a couple while they investigate some murders in West Hollywood.  After the news of Hurt's death, someone wrote in an obituary, "He never gave a bad performance."  Amen, on that.  He was worth watching even in a lame cop buddy vehicle like PARTNERS. 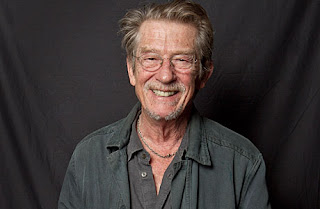 And he was brilliant on television as THE NAKED CIVIL SERVANT in 1975. 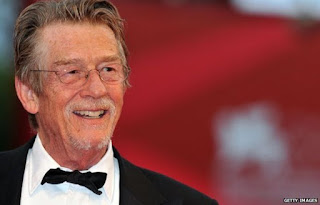 As for the real Quentin Crisp, when our taxi arrived at his destination, he turned to me and asked "Would you like some money for this?"  I said, "Oh, no.  This is on me."