It's a weekend morning.  While answering emails, reading a few articles and doing some light cleaning in the apartment, I had Turner Classic Movies on in the background.  Kirk Douglas and Burt Lancaster took their macho to the wild west for GUNFIGHT AT THE O.K. CORRAL.  But the guy with the biggest gun seems to be actor John Ireland.  Even when he's not wearing a holster.  I think Madeline Kahn said it best in YOUNG FRANKENSTEIN:  "Woof!"  What a gifted actor that John Ireland.  And what a good western.

Now on to another gun-totin' movie character.  A couple of years ago, a young lady friend urged me to see Keanu Reeves as JOHN WICK.  I really had no desire to sit through a movie with possibly a mostly monosyllabic performance from the star of POINT BREAK and SPEED.  She kept urging me to see it.  So, I gave in and I saw it.  I was totally and pleasantly surprised.  It was such a hip, fresh and original action movie with Keanu in fine form as a tender-hearted yet tough-as-nails guy named John Wick.  John's marriage was a sweet New York love story.  His wife gives him a puppy.  He's a hitman shooting it out with Russian thugs.  And that's all I'm going to tell you about the plot. 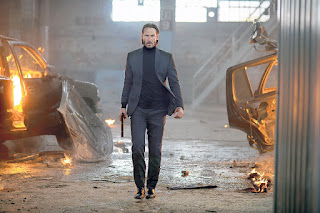 However, I will add that the puppy love angle was an inspired touch in the screenplay.  JOHN WICK is worth renting. 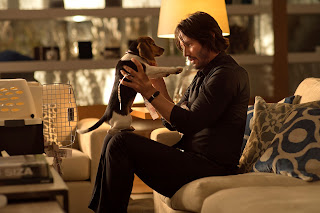 Keanu has just turned 50 when that action thriller was released.  This weekend, Keanu as back in action as the hitman in JOHN WICK: CHAPTER 2.  I want to see it.  I saw this eye-catching poster for the movie. 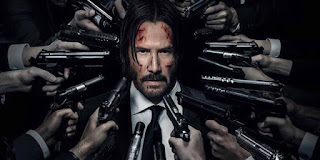 I bet you anything that its art director is a fan of and was inspired by classic films.  That poster for JOHN WICK may remind classic film fans of this shot from a Harold Lloyd silent film comedy from the 1920s.  I saw that Harold Lloyd photo in movie books I owned many years ago. 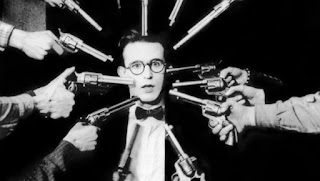 Pardon me for not knowing that name of that Harold Lloyd comedy.  If you do, please let me know.  I love how knowledge of classic film history can help one in a current job situation.  That's been my experience for a good portion of my TV career.