Oscar Talk with Kirk Douglas & Me

Always believe in yourself -- even when a boss tells you that you lack talent.  My first professional TV job was on Milwaukee's ABC affiliate.  One day in January, after four years of on-camera work as an entertainment contributor, film reviewer and the co-host of a live weekday show that was unexpectedly, suddenly canceled the week before Christmas, my boss called me into his office and told me that I didn't have the talent to work in New York City.  That was January 1985.  In September 1988, I was in New York City working on VH1 and taping the premiere edition of my prime time celebrity talk show.  My solo guest for the first show -- Hollywood legend Kirk Douglas. 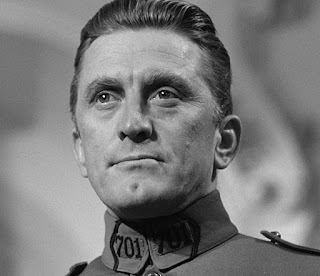 For 30 minutes on national TV, there I was -- a guy from South Central L.A. with SPARTACUS. 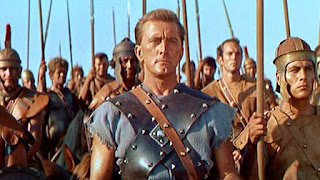 When I was a kid, we didn't have the advantage of cable TV with Turner Classic Movies, VHS tapes, DVDs and such.  We went to the drive-in movies and walk-in theaters.  We watched old movies on TV.  I went to revival movie theaters in Hollywood and saw classics thanks to special programming when I was in college.  And, if that wasn't enough, I could go see Kirk Douglas on the big screen because he was still making movies.  SPARTACUS, PATHS OF GLORY, LUST FOR LIFE, CHAMPION, THE BAD AND THE BEAUTIFUL, SEVEN DAYS IN MAY....those were Kirk Douglas classics I could discuss with my parents because we'd all seen them.

Kirk Douglas was nominated for Best Actor Oscars but never won.  Hollywood awarded him a lifetime achievement Oscar.  His son, Michael, did win Oscars.  Michael produced the Best Picture of 1975, ONE FLEW OVER THE CUCKOO'S NEST, and he won Best Actor for WALL STREET (1987).  Michael also had a big box office hit with FATAL ATTRACTION (1987) co-starring Glenn Close. 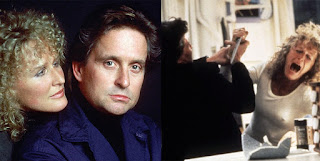 He did not have such a big box office success as the director/choreographer in the lame film version of the classic Broadway musical, A CHORUS LINE.

Kirk Douglas and I talked about Michael's Oscar wins and about his FATAL ATTRACTION co-star.  Glenn Close got an Oscar nomination for playing the psychologically twisted Manhattan executive who threatened "I'm not gonna be ignored..."

Today, Close is enjoying rave reviews for playing another woman who refuses to be ignored.  She's again playing silent film star Norma Desmond in the hit revival of SUNSET BOULEVARD, Andrew Lloyd Webber's musical based on the 1950 Billy Wilder film classic of the same name. 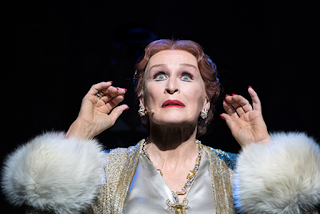 In this countdown to Oscar Sunday week, here's a clip of my talk show interview of Kirk Douglas.  We start off talking about Michael.  Enjoy.

Just like Paul McCartney did for my interview of him, Kirk Douglas arrived early and alone.  No entourage.  And he was an absolute gentlemen to everyone on the set.  A Hollywood legend and a class act.  Gracious and grateful.