Fans of the festive, colorful, empty piñata of a musical called LA LA LAND were in ecstasy.  I say "empty piñata" because that movie was amusing and fun to look at, but there was absolutely nothing inside.  That hollow screenplay was lifted by colorful art direction, energetic cinematography and talented actors who made you think a mediocre script had way more substance than it did.  There's Mia, a part-time barista at a coffee shop on the Warner Brothers studio lot in Hollywood.  She'll have a meltdown because she's been auditioning for six years, she's in her 20s and she still hasn't became a star actress yet.  And there's Seb, the 20-something unemployed jazz pianist who explains the roots of jazz to her in a club without ever mentioning black people.  That was like a young guy in a movie telling us the history of aviation without ever mentioning the Wright Brothers.  One works part-time.  The other's out of work.  Both live in large apartments. 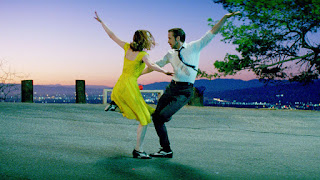 Then...the most mysterious and memorable  mistake in Oscar history.  The LA LA LAND folks were onstage and audience members were cheering.  Then....the realization that the real winner was MOONLIGHT -- a film of substance about poor, marginalized, gay and black people in Florida.  Warren Beatty and Faye Dunaway had been given the wrong envelope and announced the wrong name as Best Picture winner.

In an instant, LA LA LAND fans went from dancing gleefully on the hoods of their cars in colorful attire on their way to auditions in sunny Los Angeles... 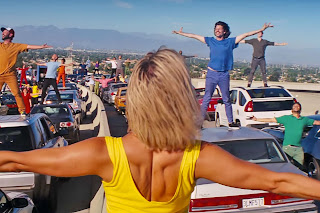 The LA LA LAND  and MOONLIGHT producers handled the messy situation most graciously.  Faye Dunaway and Warren Beatty are in the entertainment news headlines again.  The PriceWaterhouseCoopers people are sending out their resumes for new employment.