I worked on Milwaukee's ABC affiliate at the time as a entertainment reporter and a weekly film critic.  I remember going to Chicago for a press screening of a new film.  James L. Brooks, the man behind TV's brilliant sitcom, THE MARY TYLER MOORE SHOW, and its spin-off, RHODA, had made TERMS OF ENDEARMENT into a big feature for Paramount Pictures.  Based on a best-selling novel by Larry McMurtry, Brooks wrote the screenplay, produced the film and directed the film.  This is truly a movie classic about the hilarious friction and deeply heart-felt love in a mother-daughter relationship.  It's a memorable, touching tale of female bonding.  TERMS OF ENDEARMENT starred Broadway musicals and Hollywood movie veteran Shirley MacLaine. 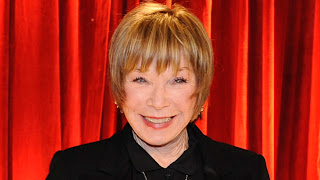 None of us in that screening room was prepared for the movie's twists and turns that had us going from howls of laughter to weeping out loud at the end.  Those unexpected twists and turns were so like life itself. 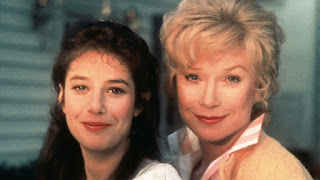 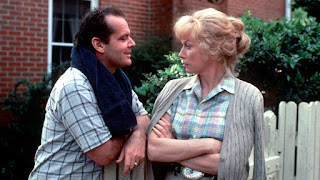 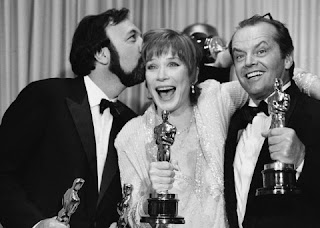 Shirley MacLaine was one of my favorite guests on my VH1 talk show.  At that time, in 1989, she had just started rehearsals on POSTCARDS FROM THE EDGE and her immediate comments on that were about how brilliant Meryl Streep was.  MacLaine was in awe of her.  Here, I asked Shirley MacLaine about a bit of vocal detail I noticed in TERMS OF ENDEARMENT.

She took the accent she had planned for Aurora in TERMS OF ENDEARMENT and gave it to Ouiser in STEEL MAGNOLIAS.  Being a woman without a man was good luck for Shirley MacLaine onscreen.  She won her Oscar for playing a widow in TERMS OF ENDEARMENT.  She made her film debut playing a young widow in Hitchcock's THE TROUBLE WITH HARRY (1955).  Off-camera, she told me that making the 1955 comedy, ARTISTS AND MODELS, was like being in a war zone.  The stars, Dean Martin and Jerry Lewis, were very close to the break-up of their successful comedy movie partnership.  She said that they were yelling at each other a lot on the set. 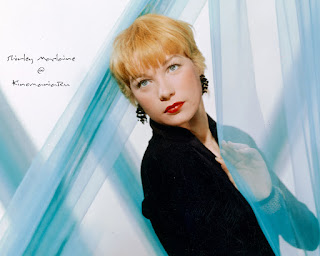 On-camera in the same interview, she told a sweet story of how Debbie Reynolds honestly explained why she should do THE UNSINKABLE MOLLY BROWN instead of Shirley.  Shirley was slated to star in the film version of that Broadway hit musical comedy, but there was a contractual snag in her doing the MGM production.  Debbie, an MGM musical star since 1952's SINGIN' IN THE RAIN,  wanted the 1964 role.  Debbie told Shirley that Shirley would definitely go on to other really good film roles.  But Debbie felt that her days as an MGM musicals leading lady were coming to a quick end and this would be her last shot at starring role in a major MGM musical.  Debbie got her one and only Oscar nomination for THE UNSINKABLE MOLLY BROWN.  And a well-deserved nomination it was.  (She should have been a Best Actress Oscar nominee for 1996's MOTHER, a wise and witty comedy/drama by Albert Brooks, but Hollywood never seemed to take her as seriously as it took Shirley. MOTHER displayed her under-appreciated acting depth.)  Debbie was right.  Her deluxe MGM musical days did end and Shirley did go on to other Oscar nominations plus an Oscar victory.

Actress Lee Remick reportedly was who director Mike Nichols wanted to play the Hollywood movie star mom in POSTCARDS FROM THE EDGE with its screenplay by Carrie Fisher, adapted from her novel of the same name.  Sadly, Lee Remick was suffering from cancer and couldn't do it.  The part was available and Carrie's mom, Debbie Reynolds, wanted it.  But Shirley MacLaine got the part and played the movie star mom character based on Debbie Reynolds.  When I mentioned that irony in our VH1 interview, Shirley chuckled and replied, "Karma." 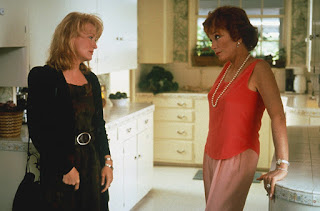