I'm In for GET OUT

Jordan Peele should be quite proud of his directorial debut with the thriller comedy, GET OUT.  I was a huge fan of the Key & Peele sketch comedy show on Comedy Central.  Jordan Peele's work with partner and friend Keegan-Michael Key earned them a prestigious Peabody Award.  On the show, the delivered some of the funniest, most razor-sharp and provocative pieces on race and class in America since the Dave Chappelle show.  They had the artistic ability and wit to tap into what many of us were feeling.  Remember Luther, President Obama's anger translator?  Perfect.  Luther acted the way we wished President Obama could have -- acted the way President Obama probably wanted to act -- but he couldn't without seeming like "an angry black man," an image the opposition would use to expand fear within its base.  Key & Peele's writing and performance could seamlessly blend a kind of goofiness like on "The Carol Burnett Show" with the kind of stinging social commentary we got from black comedians like Dick Gregory down to Chris Rock.  Is it a surprise that Jordan Peele has proven himself to be a fine, generous film director with his first project?  No.  Based on those Key & Peele sketches we saw, it's more like a promise fulfilled. Bravo, Jordan! 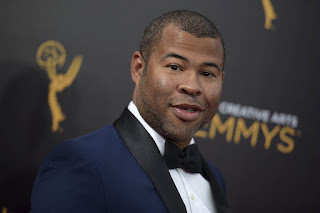 GET OUT taps into how scary it is to be a black person in white America. 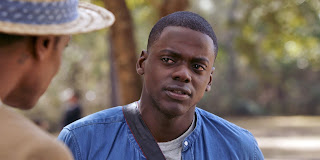 There are no monsters or sci-fi characters in the movie.  But there is definitely horror.  Writer/director Jordan Peele gives you the chills and tension of THE STEPFORD WIVES and SCREAM inside a wrapping of GUESS WHO'S COMING TO DINNER. 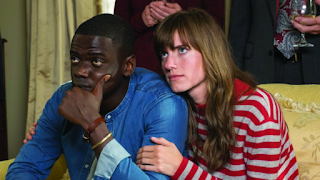 A young black man and his white girlfriend drive to her parent's estate to spend the weekend.  Her liberal parents will be meeting him for the first time.  The boyfriend senses something odd about the other black people he meets there.  It's like....like they've become...black Republicans.

Click here to see a clip from GET OUT:
https://youtu.be/5D3qH4WrnCY.

Chris then finds himself hypnotized by his girlfriend's mother.  It cured his smoking habit, but something seems strange.  He notices it.  The girlfriend doesn't.  We will see it too and we will wait for brother man to spill the tea and get out.  Here's a trailer:
https://youtu.be/sRfnevzM9kQ.

I'd love to know what classic films are Jordan Peele's favorites.  He moves his camera well.  He knows the power of a close-up with a good actors whose thoughts in a crucial scene can hold that close-up.  Peele is a good enough actor to have taken on the lead male role himself.  But he didn't.  He gives the spotlight to others.  He gets exceptional performances from his cast which includes newcomers like British-born Daniel Kaluuya as Chris, the boyfriend, and Allison Williams from the HBO series GIRLS as Rose, the girlfriend.  Peele skillfully guides veterans such as Stephen Root, Bradley Whitford and Catherine Keener.  There's a standout performance from Betty Gabriel as the family's mysteriously detached maid.  The comedy highlight is LilRel Howery as Chris' best friend, a TSA agent. Director Peele has a keen sense of pacing, which is important in horror and comedy.  This is a very entertaining horror satire with social substance and an unmistakable, fun touch of 'hood vulgarity to keep it real and give you a few laughs.

Besides tapping into the fear of being a black man in America, there's the frightening aspect of cultural appropriation.  White folks taking from black culture and making money off it.  This just doesn't apply to the 1950s when white pop/rock stars successfully covered tunes first recorded by black artists.  This applies to fashion, sports, even language.  "Bling," "baby daddy" and "booty" were terms black folks started and were saying first.  I remember when only black folks -- especially black gay  folks -- used the term "throw shade."  Now there's a new show on TV Land called THROWING SHADE -- hosted by two white people.

And then there's the fight to keep your black history from being erased or overlooked while you push against the proliferation of certain racial stereotypes.

Here's what I would suggest:  Go see the blistering and bold documentary, I AM NOT YOUR NEGRO.  That focuses on the brilliant novelist/playwright and black civil rights activist James Baldwin.  In that documentary we see Baldwin in news footage, speaking engagements and lengthy talk show clips.  He seriously points out some of the same tough, uncomfortable but necessary aspects about race in America that Peele addresses in his horror comedy.  Both features are most relevant today.