If I had to choose my Top 5 favorite movies starring Audrey Hepburn, BREAKFAST AT TIFFANY'S would most definitely be in the list.  Blake Edwards directed the 1961 film and George Axelrod wrote the screenplay.  On many a lazy summer afternoon in New York City, I played the CD soundtrack with all that wonderful original music by Henry Mancini.  He won an Oscar for that tasty score.  He and Johnny Mercer won Best Song Oscars for the wistful "Moon River," tenderly introduced in the film by Audrey Hepburn as Holly Golightly.  She got a Best Actress Oscar nomination for her rich, elegant, complicated -- and brave -- performance.

Before I make a note on a coat, wardrobe worn in the film by one of her co-stars, let me explain why I call Hepburn's performance brave. 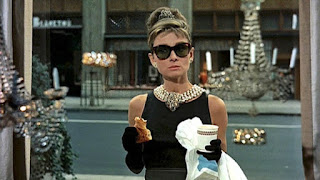 From her Hollywood introduction in William Wyler's ROMAN HOLIDAY, the film that brought her the Best Actress of 1953 Academy Award, Audrey Hepburn established a definite image that audiences loved.  She often evolved from a social caterpillar to a butterfly or, as the overjoyed French fashion designer says in FUNNY FACE, "...a bird of paradise."  Audrey Hepburn was tops at playing the intelligent, sophisticated young woman who was attracted to the older man.  Young men sought her affection.  But she had her eye on the older guy.  The older men saw in her what the young ones overlooked.  Fred Astaire saw it as the A-list fashion photographer who sees the model possibilities in her brainy Greenwich Village bookstore clerk character.  In his camera lens he sees that she's "...a girl who has character, spirit and intelligence."  The young men were a bit too immature for her even though, at first, she may have had a yen for them.  Think of her as SABRINA, the Cinderella-like chauffeur's daughter who thought she loved irresponsible playboy David but then noticed his older, business-like and humanitarian brother Linus.  Think of the handsome young French philosophy professor she finally gets to meet in FUNNY FACE.  She wants to discuss philosophy.  He wants French kissing.  In Billy Wilder's LOVE IN THE AFTERNOON, she's the young French lady, a classical cellist, who falls for the American business magnate after she does the middle-aged man a huge favor.

This dynamic in Audrey Hepburn movies was sort of a European sensibility.  Also, it enabled Audrey Hepburn to be paired with Hollywood's top established leading men.  We saw Audrey Hepburn with Gary Cooper, Cary Grant, Gregory Peck,  William Holden, Humphrey Bogart, Fred Astaire and Henry Fonda.  I know some narrow-minded folks feel that it's "creepy" to see fresh, young Audrey Hepburn with an older leading man.  They never pay attention to the specifics in the those screenplays.  Audrey's character is the one who's initially attracted.  She's the one surprised at her own feelings of  blossoming romance for the mature gent.  The older guy is not chasing her like he's an old dog trying to pick up a new trick. She makes the first move.

It's been written and said that Truman Capote had Marilyn Monroe in mind when he wrote his novella, Breakfast at Tiffany's.  You can see that if you've read it.  It's easy to imagine the early 1950s Monroe as the basis for Holly.  The screenplay is an adaptation that allowed Hepburn to flip the script on her lucrative Hollywood image.  In the movie, she's not the smart young woman with character.  She's in danger of going pleasantly to seed.  In the movie, Hepburn is elegantly outfitted but notice the darkness behind her fabulous fashion statements as Holly.  When she gets hooked up with visiting businessmen for dinner in Manhattan and they give her "fifty dollars for the powder room," that money is not a tip for the ladies' room attendant.  Holly is being paid for sexual favors.  That's how she pays her rent.  She gets dinner.  The men get dessert. 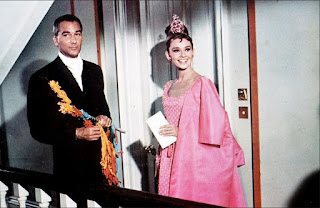 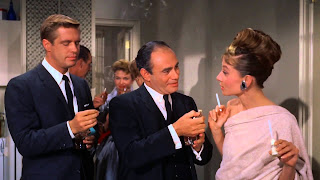 In the Blake Edwards film, Audrey Hepburn flips her persona and bravely plays the dark side of it while still giving moviegoers the fashion eye-candy they'd come to expect in her movies.  In BREAKFAST AT TIFFANY'S, it's the older men who want her for sexual escapades and do not see the sweetness and vulnerability in her.  It's the young man, played by George Peppard, who wants to give her true love. 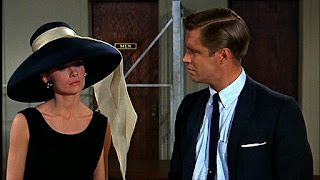 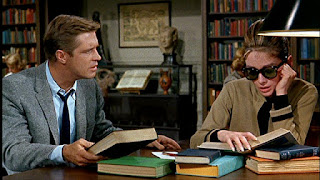 Holly Golightly, like so many of us who flocked to New York City, went there to recreate herself.  That's why we go there.  It's not just to accept a job offer.  It's to have a fresh beginning, a new start, be unknown and become somebody else in a big cosmopolitan city, somebody popular who has moved on from a heartache of the past.

George Peppard's character, Paul Varjak is an aspiring writer who lives in Holly's apartment building.  He's also being paid for sex.  He's being kept by a wealthy married woman.  She's just in it for the sex.  He's like a paid employee boy-toy to her.  The married woman is played with rich bitchiness by Patricia Neal.  She keeps Paul on the down-low.  This is my favorite outfit she wears when she drops over for some horizontal recreation. 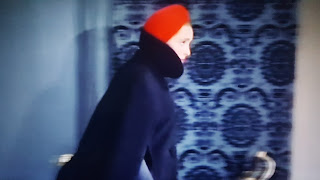 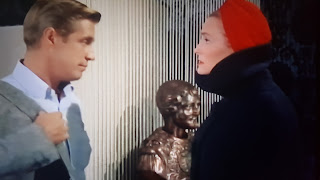 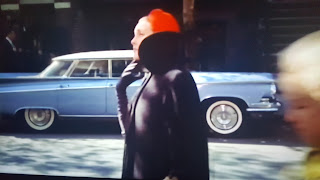 Doesn't it sort of remind you of this wardrobe we saw in Disney's animated classic, SNOW WHITE AND THE SEVEN DWARFS?  Look at the evil queen. 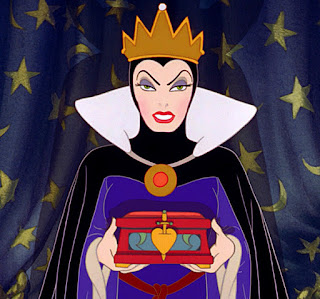 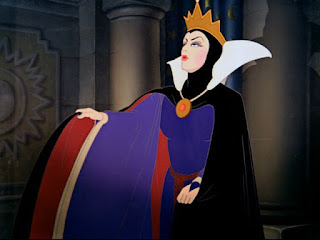 There you have it, my huckleberry friend.  My coat note for BREAKFAST AT TIFFANY'S.