Rich Work in THE CROWN

The warm and wonderful John Lithgow won a Screen Actors Guild award for his performance in THE CROWN.  I watched the first season of that Netflix series on a Saturday before I voted.  I binge-watched the entire first season again the following day.  I was hooked from the first scene in the first episode of THE CROWN. This is all based on palace facts and world history.

And one of the most superb performances in that show rich with remarkable acting was given by John Lithgow.  Yes, I voted for him.  I highly recommend you give THE CROWN a try if you have time over the weekend.  If you had to cast an actor to play the legendary Sir Winston Churchill, John Lithgow might not be the first actor you'd think of casting.  After you see him as Churchill in THE CROWN, you'll be hard pressed to think of someone who could have played the role better. 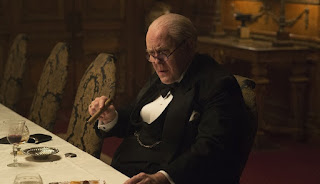 He's absolutely extraordinary.  His physical carriage, his vocal work, his internal work as a man aware of his own legend and fights to keep it alive and relevant is marvelous.  If John Lithgow had delivered this performance in a film, he'd have received an Oscar nomination for sure.  He probably would've won the Oscar.  The episode in which Churchill sits while having his portrait painted --- wow!  What an episode and what great work from Lithgow.  Churchill defeated the Nazis.  But he could not defeat the humiliating advances of old age waging a war, bit by bit, on his body. 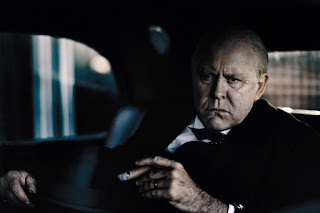 Helen Mirren won a Best Actress Oscar for playing THE QUEEN.  The real life Queen Elizabeth II reached a major milestone this month.  She celebrated her Sapphire Jubilee.  It was 65 years to the day since the Queen acceded to the throne following the death of her father, George VI, in 1952. 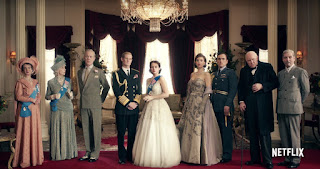 THE CROWN opens with George VI.  He's dressed for a royal event.  He's got a hacking couch.  He coughs up a bit of spittle.  There's blood in it.  He continues to smoke like a chimney.  He's not the only royal who smokes like a chimney in this series.  We see the excellent Claire Foy as the young queen before she became the queen.  It's fascinating stuff.  Some of the most fascinating stuff is seeing how devotion and allegiance to The Crown mean continuing traditions -- even if those traditions now seem archaic in a modern world.  Honoring The Crown also demands some rather brutal, severe cutting of family ties.  You'll see how The Crown on her head affected her bed, her relationship with her lusty husband, Prince Philip (very well-played by the tall, lean Matt Smith) and her sister.  The big eye-opener is the amount of education she had before she was crowned.  You may say to yourself, "What?!?!  I had a better scholastic education at that age but I had a part time retail job as a clerk in a shopping mall.  She was about the begin her reign as Queen of England!"

It's really good.  What you'll love about it is that The Royals are shown as the flesh and blood mortals behind all that pomp and circumstance.  These are people who had insecurities, jealousies, sex lives and family squabbles.  Despite all the exterior signs of luxury and upper class life, behind closed doors some of them can definitely display an unmistakable touch of the gutter.  Here's a trailer.

You will see how true that line is when you watch this engrossing British import.  Enjoy John Lithgow's brilliance in THE CROWN on Netflix.