Compelling.  Riveting.  Shocking.  Important.  Those are words to describe MAKING A MURDERER. It's the 10-episode documentary series on Netflix.  On Twitter, I notice that a couple of TV critics praised it.  Then film director William Friedkin and TV host Rosie O'Donnell praised and recommended it.  That got me interested.  Over the New Year's Eve holiday weekend, I was able to watch it.  I played the first episode, expecting to watch only that episode, close to 11:00 one night.  I stayed up till 3 A.M., glued to following episodes.  Steven Avery, a man of minimal education in rural Wisconsin, is wrongfully accused of rape and served 18 years in prison.  Are you a classic film fan?  You'll think of Henry Fonda's wrongfully accused character in Alfred Hitchcock's The Wrong Man (1956).  Steven Avery lived in Manitowoc, Wisconsin.  He's released from prison, gets national TV attention upon his release, and returns to his rural home to some loving relatives and his auto salvage business.  He plans to sue Manitowoc for $36 million.  That lawsuit would've made the Manitowoc Police Department look like fools because, when Avery was arrested, the real violent rapist was still on the loose.  Soon after Avery is freed, he's arrested again, this time charged with a grisly murder that also involves his intellectually limited, shy teen nephew.  They're accused of raping and repeatedly stabbing a young woman tied to a bed.  But there was no blood on the bed from this reported gruesome crime.  This real-life mystery has your mind reeling.  Was Avery framed by an angry local police force to the pleasure of residents who hate the Avery family?  Is Avery guilty?  I gasped at some of the events and evidence in this murder trial. 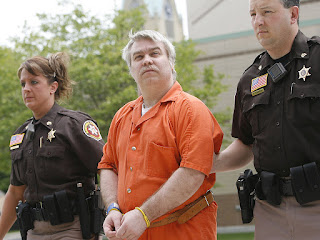 That is all I will tell you about it.  There are so many twists and turns and tragedies in the Steven Avery case that I'm sure you -- like I -- will also gasp when you watch it.  Initially, what hooked me was seeing the wrongfully accused Avery in a neighborhood I knew.  He had a court date in Milwaukee and the news footage showed an area I saw a lot.  It was within a short walking distance of my apartment. I lived and worked in Milwaukee for 10 years.  That's where I started my professional TV career after I graduated from Marquette University.  Needless to say, Milwaukee and life in Wisconsin in general was quite a drastic cultural and physical shift from what I knew having grown up in Los Angeles.  Because of TV shoots I did for Milwaukee's ABC affiliate, I'm familiar with Manitowoc.  I went there to shoot features for WISN TV. 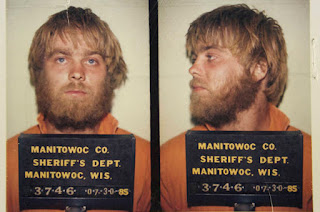 The Avery story starts in the 1980s, about the time I left Milwaukee to accept a job in New York City.  I will tell you this about the events that unfold:  I got an unsettling Stephen King story vibe from how the residents of Manitowoc seem to feel about Steven Avery and his kin.  Residents, law enforcement officials and legal representatives.  There's a darkness, a corruption, a virus of intolerance under the sunny exterior of a small town in the Midwest where the folks look wholesome, sincere and honest.

I agree with what film director William Friedkin (The French Connection, The Exorcist, The Boys in the Band) wrote on Twitter about Making A Murderer:  "...one of the greatest documentaries...a frightening examination of our justice system."

Exactly.  The Steven Avery story could've happened to anyone.  That's what is so frightening.  Rent Ken Burns 2012 documentary, THE CENTRAL PARK FIVE.  It examines the 1989 case of five black and Latino teens from Harlem who were wrongfully accused of raping a white woman in Central Park.  They served between six and thirteen years of hard time in prison before the the actual serial rapist confessed to the crime.  In the documentary, Donald Trump called for the execution of the five wrongfully accused teens.  Is Steven Avery guilty of murder?  I don't know.  It's the look at the justice system and the shocking revelations of irresponsible legal representatives that caused my jaw to drop more than once.

Last year was one in which in the entertainment workplace inequality of women directors and the exceptional, often groundbreaking work of women filmmakers got some long overdue attention.  Add the names of Moira Demos and Laura Ricciardi to the praise-worthy list of Women In Film. 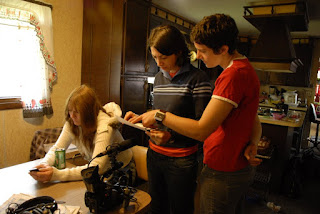 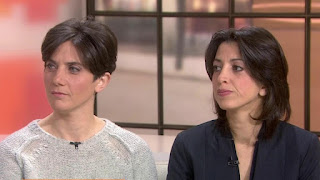 They gave us a powerful and provocative documentary in Making A Murderer.  People all over the country all talking about it. 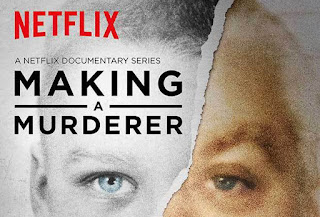 If you've seen the series and want to hear a good interview of the female filmmakers, check out the Television section for the feature called "Over 10 Years, Two Filmmakers Documented The 'Making' Of A Murderer" on NPR.org.
at January 05, 2016