She Lights Up BROOKLYN

A department store clerk.  An Irish immigrant in BROOKLYN, a romantic story that deserves its Oscar nominations for Best Picture and Best Actress. Brooklyn is lyrical and lovely to look at.  The production reminds you that movies can be beautiful.  The story reminds you that some of the most extraordinary people you could ever hope to meet are the ordinary people you see just about every day.  One of those people is Eilis Lacey, wonderfully played by Saorirse Ronan.  She's the shy, sweet, intelligent young lady who traveled alone from Ireland and landed a job in a Brooklyn department store.

She's from a small, humble Irish town, the kind of town in which it's hard to keep one's business to one's self.  Gossip seems to be a pastime.  When first we see her, it's dark and she looks rather drab as she heads out.  Keep that in mind when you see the final image of her at the film's end.  In town, she's the highly efficient  shop clerk.  It's the early 1950s. 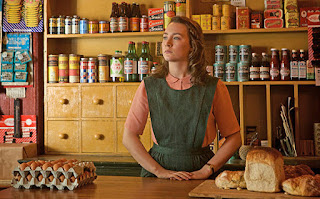 In Brooklyn, based on a novel of the same name, we see a young woman leave her homeland to create her life -- her own life -- be open to new things and challenge the strong emotional pulls of hometown, family and society.  Her American girlfriends help her create her new self with make-up, clothing and table etiquette tips.

I thought this movie was going to be a bit slow and very hightone -- like those prestigious Merchant Ivory films we got in the 1980s.  Wrong.  Brooklyn never loses its working class sensibilities and warmth.  Ronan glides through the role with grace and wit, even when sea sickness hits her at both ends during the ocean liner voyage to America.  A gorgeously photographed film, director John Crowley lets the camera rest on Ronan's gentle face.  He gives her close-ups, the quality of close-ups we've seen in classic Hollywood films from the 1930s, 40s and 50s.  She's an actress who can let emotions wash over her face effectively in a close-up.  In Brooklyn, the Irish lass meets an Italian guy at a dance. It's a new feeling in a new land but complications arise.  And secrets.  There's the pull of home and family and society.  Here's a trailer.

Saoirse Ronan is radiant in this movie.  Julie Walters is a hoot as the woman who runs the Brooklyn boarding house.  Emory Cohen is perfectly cast as Tony Fiorello. Is Tony the right man for her?  This young actor delivers a rich, tender performance.  He's terrific with Ronan. 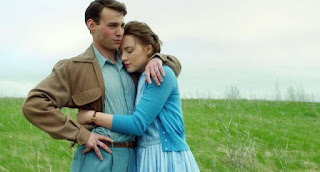 The streetcar scene with the two of them gave my heart wings.  Wow.  Beautifully acted.  I loved that scene so much.  If you need a date movie, keep this gem in mind.  Trust me on this.  Going to Brooklyn is absolutely worth the trip and money. 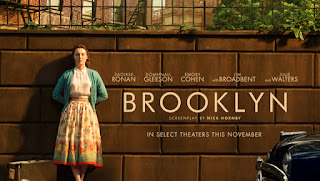 About Saoirse Ronan -- she was born in the Bronx in New York City.  When she was a toddler, her Irish parents moved the family to Ireland.  I first noticed her in 2007's Atonement.  Now that was a hightone, prestigious and occasionally slow British film.  But the kid in it knocked me out.  She was sensational.  She projected a depth and maturity without coming off as precocious or bratty.  It was juvenile actress Saoirse Ronan.  For that performance, she became one of the youngest females nominated for the Best Supporting Actress Oscar. 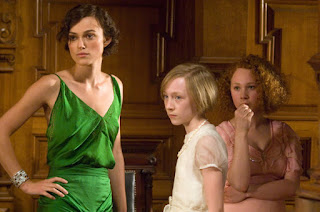 You really get to see her versatility in a Hollywood comedy that never got released.  It pretty much went straight to cable and DVD.  That's a shame because it's most enjoyable and way better than some of those big screen silly and crappy comedies Adam Sandler cranks out.  I Could Never Be Your Woman is a 2008 comedy directed by Amy Heckerling.  It stars Michelle Pfeiffer and Paul Rudd.  Pfeiffer, in fine form, plays a 40 year old divorced TV sitcom writer and producer in Hollywood.  She's good at her job, insecure about her age, still friendly with her ex-husband, and the love of her life is her 13-year old daughter.  The feeling is mutual.  Ronan is so delightful as that down-to-earth, unspoiled Hollywood kid who is crazy about her mom.  She watches her mom develop a major crush on an actor who did very well at a sitcom audition.  But the cute actor, played by Paul Rudd, is almost ten years younger than the divorced writer/producer & single working mother.  You'd swear Ronan had grown up in Southern California.  She's so good.  If you can find the DVD, I Could Never Be Your Woman is a fun weekend rental.  Tracey Ullman appears as Mother Nature.  Come on...that's fun right there.  Michelle Pfeiffer and Saoirse Ronan made a lovable team. 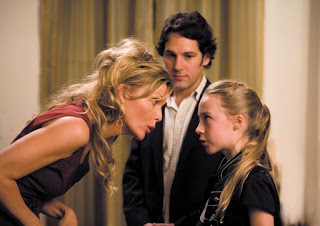 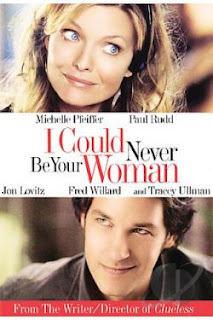 Enjoy that...and you must see the film that brought Ronan her second Oscar nomination. Brooklyn.