Thanks Mina Kim of KQED Radio for one of the best interviews of Billy Crystal I've ever heard.  And thanks for including the question that I submitted via Twitter in your interview.  This live interview aired Friday, January 8th.  The comedian, actor, producer, director was live on the phone for the KQED Forum show in the morning.  He finally answered a question I first tried to ask him way back in the 1980s during my first professional job in television.  I was a California kid who recently graduated from Marquette University in Milwaukee, Wisconsin.  I worked on WISN TV, the city's ABC affiliate.  Crystal tickled viewers with his performance as Jodie, the openly gay character on the prime time ABC sitcom, SOAP.  The show aired from the late 1970s to the early 1980s. 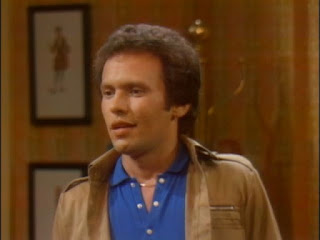 The show lampooned soap operas (daytime dramas) which were red hot with TV viewers at the time. Think of how a network soap was the foundation for 1982 comedy classic, Tootsie, starring Dustin Hoffman.  Soap was sharp, funny, well-acted and quite controversial.  The hit sitcom Benson was a Soap spin-off.  Soap ran about four seasons.  It's fifth season went on without a sponsor because, as Billy Crystal said in the KQED interview, "there was pressure from church groups." 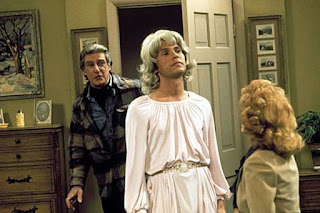 Much of Jodie's comedy business was somewhat broad in the early episodes.  As the show found its voice, characters evolved and had more dimension.  Jodie had once had sex with a woman who got pregnant and had his baby.  Through the seasons, Jodie grew into a responsible young gay man who got legal help into order to be a responsible parent to his child.  He proved himself worthy of parenthood.  That's probably what pissed off church groups.  This acting role came before Billy Crystal went on to hit big as a cast member on NBC's Saturday Night Live followed by comedy movie hits such as When Harry Met Sally and City Slickers.  When I met him the first time, the comedian was in Milwaukee to do stand-up dates at the city's summer festival.  We taped the interview outdoors on the grounds of the city's performing arts center.  He got ticked off that more people passing by recognized me than him.  I tried to explain to him that I was the only black man on local TV doing celebrity interviews and co-hosting a weekday afternoon show.  In Milwaukee and on national TV in general, the field of entertainment reporters was still predominantly white.  Also, being that I am...shall we say...heterosexually-challenged, I was eager to interview Crystal about his groundbreaking work on Soap.  I knew men who'd married and had a child because of social and family expectations.  Later, they came to grips with their true sexual orientation.  I knew stings of racism and homophobia in Milwaukee, stings that muscled up my motivation to land a job in New York City where I could work amidst more diversity.   Jodie came to TV before William Hurt became the first actor to win an Oscar for playing an openly gay character (1985's Kiss of the Spider Woman) and before former ABC sitcom actor Tom Hanks also won a Best Actor Oscar for playing an openly gay and terminally ill character in the AIDS drama, 1993's Philadelphia.  Millions of us baby boomers grew up seeing gay men on TV and in movies either be the sissy comic element, the victim, the social deviant or the psychotic killer.  Hollywood stars shied away from playing gay characters and gay actors tried to hide their true selves.  Being gay could mean not getting consideration for employment.  Or it could mean losing some work opportunities that you were getting.  Men feared hearing that "reads light" was written on their resume after an audition -- meaning that the actor didn't come across as macho straight.  There weren't openly gay actors, TV hosts and network news anchors winning awards, hosting the Oscars and making big money.  There wasn't same sex marriage.  Crystal's work was significant to me and to others like me.  We appreciated seeing a positive gay character on weekly network TV. It gave us hope.  However, because Crystal's young comedian ego was bruised by my being recognized in Milwaukee, he peppered me with "funny" insults during the interview.  I couldn't get him to be serious about his ABC work that meant so much to me. Our second interview, for VH1 in the late 1980s, never aired.  I flew from New York to tape that interview in Hollywood.  Apparently, his ego was still bruised.  He peppered me with more comedy insults but they came off as so mean that we didn't air the short interview out of respect to his status as a beloved comedian from SNL.  He'd put himself in an unflattering light.  At that time, I was the first black person to get his own celebrity talk show on VH1.  He still had the Milwaukee experience in his mind. The third interview, in the 1990s for Good Day New York after his huge successes as a host of the Oscars, was most pleasant. But I didn't get to ask my Soap questions.

KQED tweeted on Jan. 8th that Billy Crystal would be coming on for a live interview and asked if anyone had question.  My Twitter question as about his gay character on Soap.  What was the response to his work and did he fear the industry would think he was gay which, at that time, would've meant fewer work opportunities?

Billy Crystal was so warm and witty and forthcoming in that KQED interview.  There was depth and compassion and generosity in his answers.  It was a side of him that I've long-felt existed but I never, ever heard.  That's probably because he's older now (like I am) and he's lost a dear, close friend. Robin Williams.  The show host read my question.  I had a hunch about the answer way back when...and I was right.  He said that, in taking the role of the gay character, he was "sort of worried about it at the beginning"...."worried about typecasting."  He added that "it was a different America."  It certainly was.  Think about it.  Long before shows like Will & Grace and Modern Family, Billy Crystal played a man who was "...warm and funny and happened to be gay," as Crystal said.  That interview made me become a Billy Crystal fan all over again. 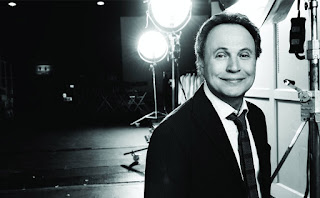 And yes, jazz great Billie Holiday was once babysitter to little Billy and took him to the movies.  His late father was involved professionally with black jazz artists in New York City.  Crystal talked about that in his hit one-man Broadway show, 700 Sundays.  He tells the story in the interview.  He also talks lovingly about the late Robin Williams and he gives beautiful advice to a young man seeking a career in stand-up comedy.

To hear the entire interview, go to the KQED website.  Look for *Radio* on the upper left hand side.  Click onto that and in the Programs section, find Forum.  The Billy Crystal interview is in the KQED Forum section.  I think you'll enjoy it.  And I'm so glad I finally got my answer.  It took years, but I got it.  Here's the link for the website:  KQED.org.