"I shot him with a revolver I keep near my balls."  If, in the 1970s or early 80s, Jack Nicholson had played a tough, dapper, openly gay Los Angeles detective, the one very well-played by Val Kilmer in KISS KISS BANG BANG would've been a juicy role for Jack to bite into on the big screen.  You read that correctly -- an openly gay L.A. detective.  Kilmer's private eye character is the guy who kept a revolver near his privates. 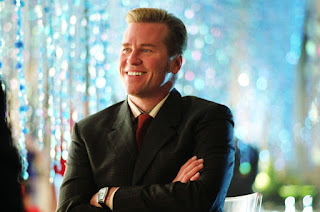 He also orders his unlikely partner in crime-solving to "Get the finger, kill the dog, get out of there."  This Christmastime crime thriller is one of my new favorite modern-day holiday DVD rentals.  Every year, I rent my longtime favorite classics such as Holiday Inn, in which Bing Crosby sang "White Christmas" for the first time, It's A Wonderful Life, and The Bishop's Wife with Cary Grant as an angel who helps a bishop and his wife during a yuletide dilemma.  Nowadays, I balance the sweetness of all that classic movie gingerbread with a quirky, hip murder mystery set in L.A.  Val Kilmer is the gay private eye and Robert Downey Jr. co-stars as the smalltime New York City crook who bungles his way into a casting session and winds up in L.A. to research his cop drama movie role. 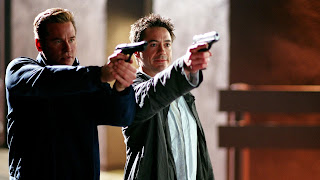 Toss a childhood sweetheart into this Hollywood mix, add Downey doing some kooky but very original narration, fold it into a tasty screenplay written by Shane Black, let Shane Black make his directorial debut with it and you've got one highly enjoyable dish of movie entertainment.  Highly enjoyable and novel.  In terms of a man with a same-sex attraction, this movie got nowhere near the attention that Brokeback Mountain did when it was released later that same year of 2005.  But that's a different  kind of film.  Entertainment reporters should've paid more attention to the freshness of Kiss Kiss Bang Bang, the movie studio should've done more to promote it and there should've been a sequel reuniting Val Kilmer and Robert Downey Jr.  Rarely do you get a major studio Hollywood release in which the gay male is the hero and the lead character.  Without Perry the detective, the crime does not get solved and the killers get away.  He's vital.  Also, Hollywood big studio movies rarely look at a gay/straight male friendship.  Trust me, there are plenty of them in America.  I had two straight roommates in the 1980s, each in a different city during the early days of my TV career.  To this very day, they are a couple of the best friends I've ever had.  We're still in touch a lot.  This different crime-solving movie duo is fun to watch.  Yes, I totally dig Val Kilmer as Perry, the cool, no-nonsense detective who says "I'm not a nice man, Harry" and Robert Downey Jr as Harry, the hyper, hot-mess of a low-level thief now trying to do the right thing during the holidays. 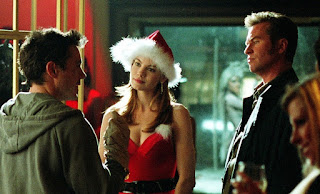 Luscious Michelle Monaghan can work a holiday outfit as Harmony, the childhood sweetheart who relocated to Hollywood.  She looks like a Christmas gift that Harry the ex-crook would like to unwrap.   To see the trailer for Kiss Kiss Bang Bang, click onto this link: https://youtu.be/K1xsTRG-O04.

Shane Black gave us the blockbuster hit, Lethal Weapon, back in the 1980s.  He wrote that screenplay. The late and brilliant casting director Marion Dougherty kicked it up a big notch when she urged director Richard Donner to see Danny Glover as a candidate to play the older cop role.  As Donner has admitted on camera, he wanted to kick himself for automatically imagining only white actors in the cop duo lead roles.  Dougherty's appreciated vision opened the door for more racial diversity in cop buddy movies.  Also, Glover was perfect in the Lethal Weapon role. (Donner was set to cast Brian Dennehy opposite Mel Gibson).  In writing and directing Kiss Kiss Bang Bang, Shane Black took his cop duo format and kicked it up an ever bigger notch in the diversity department.

There are classic films, crime stories, in which the gay male character is quite important to the action.  You may not have known the characters were gay but they were. There's The Maltese Falcon (1941) with Humphrey Bogart up against a trio of gay bad guys played by Sydney Greenstreet, Peter Lorre and Elisha Cook, Jr.  There's Johnny Eager (1941) with Van Heflin as the gay alcoholic best friend to Johnny Eager, a bigtime hood who has a chance to change his ways.  Heflin won an Oscar for his performance.  There's big, brawny Glenn Anders as the queeny legal partner with Rita Hayworth as The Lady from Shanghai (1947).  Those five actors were in supporting roles.  Val Kilmer, a good guy like Bogart in The Maltese Falcon, took the lead.  He and Downey made a fabulous couple. Excellent chemistry.  The murder mystery is a thriller, the pace is brisk, the acting is good and the comedy works.  And we got a look at a new kind of friendship for the cop buddy movie. This was fine entertainment that went unappreciated in 2005.

The fact that Kiss Kiss Bang Bang got little attention at the box office is a crime in itself.