Broadway legend Carol Channing could've been knocked out during a knock-out performance of Hello, Dolly! on tour.  It was one of the most memorable nights of theater I've ever experienced.  It was also a memorable week because I got to interview her in her dressing room. 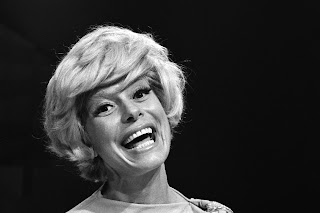 It was the 1970s.  I was new to Milwaukee's world of local media and had landed my first professional on-air broadcast job.  I was a part-time reporter for a weekday morning show on 93QFM.  That was a very popular FM rock radio station.  What's now called the Marcus Center was, in the 70s, called the P.A.C. -- the Performing Arts Center.  The main theater of about 2500 red seats was just as handsome and deluxe as any theater I'd seen in Los Angeles, my hometown.  When I was in college, I worked as an usher at the Performing Arts Center.  That job was more fun than work.  As a cub radio reporter fresh out of college, I returned the P.A.C. in a different capacity.  Hello, Dolly! came to our Performing Arts Center during its revival tour.  Starring Carol Channing in the role she made famous in the 1960s. 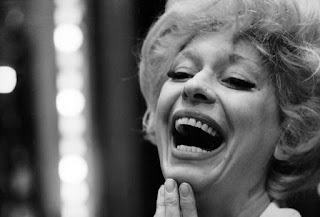 Press was invited to Channing's opening night performance of Hello, Dolly! and there was a press conference after the show.  I was local press, a radio guy with a tape recorder.  She was delightful and chatty and smart as a whip.  She could play a ditzy blonde onstage and on TV but, in real life, she was as ditzy as General Patton.

I saw the show three times.  The second time I saw it, a tragedy nearly occurred.

I had a great seat up close in the orchestra section.  Broadway veteran Lee Roy Reams was in the cast.  The company had just started the "Put On Your Sunday Clothes" number when I saw stagehands that I knew from my usher days gather in the wings.  They looked seriously anxious and worried.  They were also looking up at the ceiling.  Above the actors was a long, thick brown roll of material.  It was long like a tree log you'd find in a sawmill.  And it was dangling precariously above Carol Channing.  It had become unhinged. 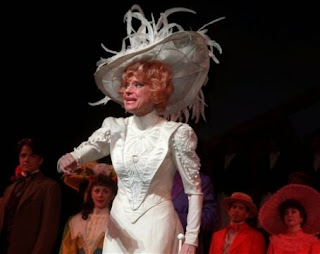 Channing was downstage performing the number.  She took a choreographed step back and, is if on cue, that huge roll came crashing down onto the stage.  Wham!  I felt the wind from it in my seat.  The audience gasped.  You saw the wind from it ruffle the feathers on her hat.  Not a single actor was hit, thank Heaven.  But that long roll was still on the stage.  The two actors playing Barnaby and Cornelius, Mr. Reams was one of them, danced it off into the wings in time to the music.  One took one end, the other took the other end, they lifted it and strutted it over to the relieved stagehands.  I talked to a stagehand after the show.  He said they could see where it would fall and they were about to run onstage and pull Channing to safety when she took steps back as choreographed.  They were positive the star could've been critically injured if that object had fallen on her from that height.

She never missed a step or a lyric in the number during that mishap. She kept right on going and she stayed in character.  The audience loved every single thing she did even more from then on.  Folks cheered the title number as if Milwaukee had won the World Series. 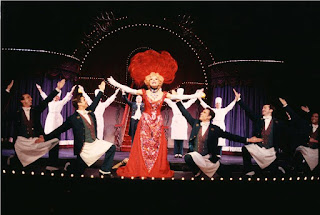 The standing ovation at the end of the show was long and enthusiastic.  The audience rose immediately with cheers and applause.  Miss Channing addressed the audience -- and no one sat as she spoke to us.  With that distinctive voice, she sweetly said "Why...you're shtill shtanding."  She complimented Milwaukee for its politeness.

I'd seen the movie starring Barbra Streisand.  The screenplay, not surprisingly, changed the book of the Broadway show to suit the image and different vocal talents of Streisand.   The movie was a big budget, colossal 20th Century Fox musical in the late 60s helmed by production team veterans from the famed MGM Freed unit of the 1940s.  Director Gene Kelly, producer Roger Edens and music director Lennie Hayton were on the movie's team.  The Broadway play was more intimate, more touching.  At the press conference, Channing detailed the essential dramatic heart and wisdom of Thornton Wilder's source material that served as the basis for the musical.  I saw it three times because  her performance was like a master class in musical comedy acting.  Eddie Bracken was her leading man.

How'd I get a one-on-one interview?  Well, I was the only black person at the press conference on opening night and I had introduced myself to her then-husband, Charles Lowe.  He was also her manager and publicist.  I thanked him for inviting me to the press conference.  He was impressed that I knew he'd once worked with Gracie Allen.  He saw me in the lobby about to purchase a ticket to see the show a third time (after the onstage accident) and he stopped me before I got to the window.  I told him I was seeing the show again.  He told me to come backstage after that show to see Carol.  I asked if I could do a short interview of Miss Channing for my radio show.  Not only did he say "Yes," he went to the box office window and told the clerk to give me a house seat.

Carol Channing is tall. Taller than I.  And a gracious pro.  She greeted me at her dressing room door with an energetic "Bobby Rivers!  Thank you for coming to see the show again."  She was wearing black pants and a sheer black blouse. Very sheer.  Let's just say see-through.  And she wasn't wearing a bra.

She gave me a lovely interview.  I was so lucky.  And she was extremely lucky onstage.  The Theater Gods definitely had her in a protective circle that day in Milwaukee.  Carol Channing turns 95 on January 31st.  Our interview was one of the things that helped me move up in the early days of my broadcast career.  Obviously, I've never forgotten her generosity -- and the greater respect she gave me for the theater.  She didn't just promote her show, by the way.  She promoted others shows that were running on Broadway and urged us to see them if we could.  She was passionate about people experiencing live theater. 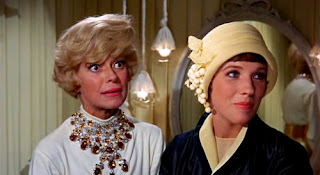 Happy Birthday, Miss Channing...and thank you.  You're a true show biz legend and a wonderful advocate for the fine arts.

If you readers are ever in Milwaukee, there's some mighty fine theater at the Marcus Center.  Check out its website here:  www.MarcusCenter.org.
at January 31, 2016