Amazing.  An African American man is in his second term as President of the United States, the Supreme Court ruled that same-sex couples can be married legally all across the nation and Matthew McConaughey won an Oscar for Best Actor. Did you ever think you'd live to see the day?  And President Obama is the focus in two broadcasts that you need to hear.  One is the podcast of smart comedian Marc Maron.  His WTF podcast is highly popular and a favorite with folks at National Public Radio such as Terry Gross, host of Fresh Air.  The President, during a recent California trip, sat with Maron in the comedian's Los Angeles garage for a very special episode  . 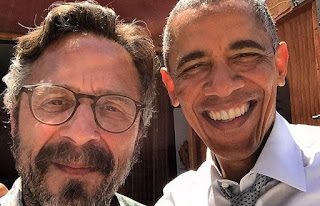 I shed tears of sadness, tears of joy and tears of pride over the last ten days.  This month proved, yet again, that we are not in a post-racial America simply because we elected Barack Obama to office.  I had a Facebook experience in which some of my liberal white buddies went clueless on me over the race issue.  It was June 25th, 2009.  In the morning, we got word that actress Farrah Fawcett, star of TV's Charlie's Angels, had succumbed to cancer.  On my Facebook feed, many people of all colors had written the same thing in condolence comments:  "Heaven has a new angel."  Late that afternoon came the shocking news that music superstar Michael Jackson died.  I posted my shock at hearing that news and added my deep sympathy.  I'd been a fan ever since The Jackson Five hit the music scene during my South Central L.A. youth.   Black friends had added comments under mine that he was a great black entertainer who will be deeply missed.  A few of my liberal white male friends wrote, "He was black?"  Heated comments from black and Latino friends on my Facebook went up in response to the "He was black?" wisecracks.  I'd left my apartment for about one hour before that disruption.  When I returned, I had to delete the thread.  It was that intense.   Some black and Latino friends thought I kept the wisecracks posted because I thought they were funny.  No.  I was offline and away from my apartment.  As for my white liberal buddies, I couldn't believe they wrote that within minutes after the man's death was announced.  Just to try to be funny.  It came off as racially offensive.

In bygone days, why did black people try to lighten their skin and perhaps pass for white?  So they could escape racial bigotry.  So they wouldn't be abused or beaten or even killed for being black.  When the news came out that actress Farrah Fawcett died, no one wrote "She was an actress?"

Fast forward from June 2009 to June 2015.  One morning, Rachel Dolezal is being interviewed by Matt Lauer on NBC's Today Show.  Ms. Dolezal lost her job as president of Spokane, Washington's NAACP when it was discovered that she lied about being black.  She was born of white parents.  In the interview, she claimed to "identify" with being black. So, on the Today Show, you basically had two white people on a network morning news show talking about how hard it is to be black in America.  Rachel Dolezal was the big news story of the morning.  That night -- we were hit with the horrible reality of what it can mean to really be black in America.  A young white racist shot and killed 8 black people sitting in a church.  He killed them because they were black.  Yes, they were black.  Yes, Michael Jackson was black.  Do you get it now?

When I heard the news of the racist terrorist attack in a Charleston, South Carolina church, I gasped.  Then I felt so, so tired.  Drained of all physical and spiritual energy, as if someone had reached in and yanked the soul right out me.  I cried and thought to myself, "They still hate us."  Racism.  And another multiple shooting because someone mentally unhinged had easy access to a gun.

President Barack Obama talked about that, about his anger with a disappointing Congress when he sought stricter gun laws, he talked about growing up with a father figure and he talked about being a father.  You may have heard reports that President Obama said "the N-word" during the interview.  Yes, he did.  He used it in telling how we must root out that word and racist in America.  He used it the way Atticus Finch uses it in To Kill a Mockingbird as he explains to his little girl that racism is bad.  He didn't use it as a slur in a street slang way.

You need to hear the interview.  Maron...how I dig him.  He now has a TV show on IFC plus his hit podcast.  Marc Maron interviews President Obama in Episode 613 of WTF.  It aired June 22nd.  To play it, go here:  WTFpod.com. 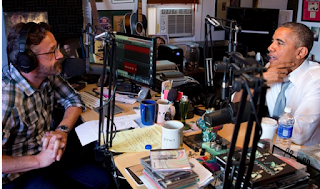 I agree with Maron's description of our president after they'd wrapped the broadcast.  He was "comfortable...casual...charming." 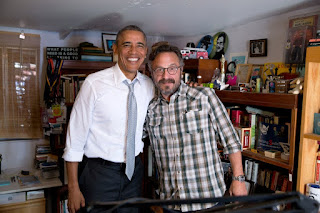 Friday morning came the historic decision from the Supreme Court.  Same-sex couples can marry legally in all the United States.  I heard the news and said, "Wow."  I couldn't believe it happened.  Then I cried with happiness and wished that my late partner had lived to share the moment with me.  He'd have been a great husband.  Friday afternoon, I cried tears of pride.  President Obama was elected in 2008.  But he came home with that eulogy he delivered for Rev. Clementa Pinckney, a man he knew and a man of peace who was killed by the racist shooter.  Trust of me on this...that eulogy will be one of the golden, shining moments of his legacy.  He called it all out and wrapped it up by singing "Amazing Grace."
What a moving speech.  What a month.  And June isn't over yet.  Happy Pride Weekend.