New from Director of WHAT'S UP, DOC?

Director Peter Bogdanovich made a new comedy called SHE'S FUNNY THAT WAY.  I sat through it so that you don't have to.  If you're a classic film fan and do choose to see it, the sound you'll hear will be that of Charles Boyer, Jennifer Jones and film director Ernst Lubitsch spinning in their graves.  Younger viewers will recognize Peter Bogdanovich as the therapist to Tony's therapist on The Sopranos.  We older filmgoers recognize Bogdanovich as one of the hottest young directors of the 1970s.  Scorcese, Spielberg, Bogdanovich and Woody Allen.  Those four had critics and audiences overjoyed.  Bogdanovich directed three great films -- the drama  The Last Picture Show (1971) followed by two bright comedies -- What's Up, Doc? (1972) and Paper Moon (1973).  In those comedies, he displayed an obvious reverence for Howard Hawks and Preston Sturges in his directing style.  He interviewed renowned directors from Hollywood's Golden Age, he wrote magazine articles about acclaimed directors such as Preston Sturges.  Then something sad happened.  He sputtered through the 1980s while those other three directors went on to more hit films. In the 1990s, his movie director mojo seemed to disappear. It has not reappeared with She's Funny That Way, a comedy that seems more like a retread of a tiresome Woody Allen feature from the 1990s.  Imogen Poots and Owen Wilson star in this Bogdanovich movie. 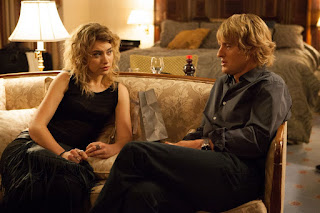 The comedy opens with Fred Astaire's original recording of "Cheek to Cheek" from his 1935 classic movie musical, Top Hat.  A new Hollywood star is talking.  She's got a Brooklyn accent.  She seems sweet and a bit shy.  She's being interviewed by a cynical reporter played by the always-dependable and under-appreciated Illeana Douglas.  We find out that Isabella loves classic films and the romance of them.  She loves "magic" and "happy endings."  She mentions Fred Astaire and Ginger Rogers, Humphrey Bogart and Lauren Bacall, Spencer Tracy and Katharine Hepburn, Cary Grant, Marlon Brando and James Dean.  She talks about the Hollywood legend of how Lana Turner was discovered.  We also find out that Isabella was a call girl who became a Broadway actress.  Instead of a "call girl," she prefers to say that she was "a muse."

Poots plays Isabella "Izzy" Finkelstein.  She uses the last name Patterson instead.  Derek is a director in from L.A.  His wife is an actress.  He's casting/directing a new play in which the Mrs. will star when she flies into town.  He checks into his A-list Manhattan hotel room.  As he's ordering an escort on the hotel phone, his little boy and wife call on his cell phone.  Izzy lives at home in Brooklyn with her loud parents, played by Cybill Shepard and Richard Lewis, when she gets a call from the escort agency.  She gets into Manhattan to meet her john.  She likes Derek.  He finds her sweet.  In bed after sex, they chat about being told where your place in life is.  He gives his opinion about people telling you where your place is.  If you're a classic film fan and think his short monologue about "squirrels to the nuts" sounds familiar, you're correct.  It's word-for-word what Charles Boyer says to the gorgeous lady plumber played by Jennifer Jones under the kitchen sink in the first 15 minutes of Cluny Brown.  That 1946 feature from 20th Century Fox is one of my favorite comedies directed by Ernst Lubitsch. 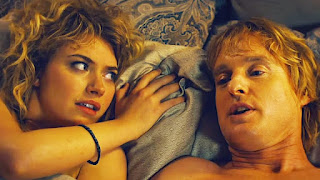 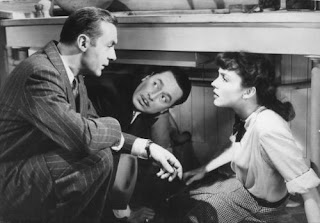 The "squirrels to the nuts" line from Cluny Brown pops up throughout the rest of She's Funny That Way.

Before Isabella and Derek parts, he wants to inspire her to seek a new career.  He gives her a generous sum of money to go out and change her life.  She doesn't like being a prostitute.  She dreams of being an actress.  Time passes.  The wife comes to NYC.  Auditions for the play begin.  Izzy gets an audition to play the likable hooker in the Broadway play.  Derek is flustered to see her show up at the audition.  She's surprised to see him and to discover his real occupation.  And his real name.  It's Albert.  The clueless wife is present and thinks Izzy is perfect for the role.  She pushes for her to be cast.  The leading man recognizes Izzy because he was one of her johns.  Wackiness and complications ensue.  You get the impression that being a hooker is smart career move for a young woman.  Jennifer Aniston has a supporting role as an obnoxious therapist.  Everything that was annoying about her as the therapist in Horrible Bosses 2 is expanded here.  Izzy bcomes one of her patients.  Another of the shrink's patients is a married man who was one of Izzy's johns and he's still obsessed with her. 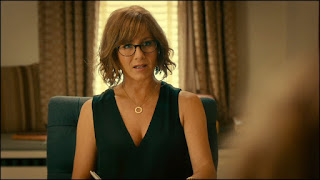 Here's what I meant about this comedy being tiresome like a Woody Allen  feature from the 1990s.  About that time, even white critics were wondering why Allen never or rarely had black actors in his films that were set and shot in Manhattan.  Sometimes you didn't even see many black people as extras in his Manhattan street scenes.  It was as if he thought all black folks lived only in Harlem, where scenes in his classic films never took place.  In this modern day Manhattan comedy, you'd think that no black people walk up Madison Avenue beyond 57th Street.  The background actors are predominantly white.  Notice this in the sidewalk scenes that introduce Aniston's abrasive character. 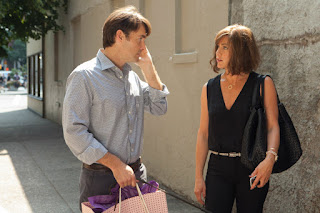 When Allen finally did have a black person in a key role, it was Hazelle Goodman as Cookie...the hooker...in 1997's Deconstructing Harry.  Think of that when you see She's Funny That Way.  A Broadway play is in rehearsals in She's Funny That Way but, like in Allen's comedies, you don't see black people as playwrights, directors, stage managers, producers, lead actors in the play or as theatrical agents.  Or as therapists.  In posh restaurants, you don't see black people as head waiters or managers.  Kathryn Hahn plays the actress wife working with the ex-hooker-turned-actress. 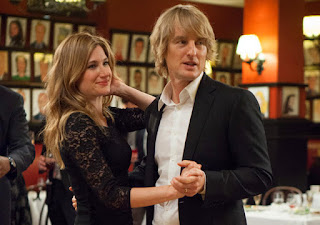 This is a film in which a hooker can live with her clueless parents, make you laugh, literally charm the pants off a guy and wind up making her acting debut in a Broadway play. 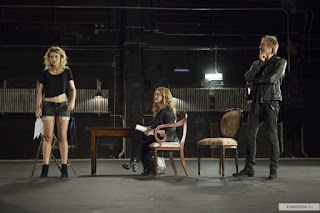 If she'd been a black hooker from Brooklyn, she probably would've been shot and killed by the wife.  To me, this movie seemed to have that irritating Caucasian Hollywood Boys Club double standard.  I'll put it like this:  If you're 16, white and pregnant...you make good grades in high school, you're witty, you've got understanding parents to love and help you through your dilemma, and you live in a nice suburban home.  You have your own car.  You're in a sophisticated indie comedy and we call you Juno. 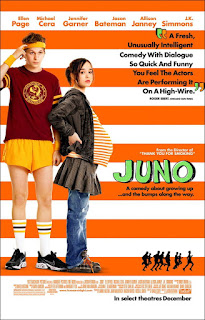 If you're 16, black and pregnant...you can barely read and you do poorly in high school,  you've got an abusive mother who throws a TV at your head, you have a miserable life with your mean single parent in the projects, and you steal a bucket of fried chicken.  You have to take the bus.  You're in a depressing indie drama and we call you Precious. 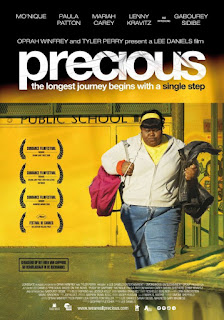 Bogdanovich's cast has some heavy lifting to do with this wooden screenplay but British actress Imogen Poots gives good Brooklyn.  I liked her more than I liked the script.

This movie was scheduled to open here in May but the release date was pushed back to late August.  There was one performer in a small role who really broke me up.  Lucy Punch plays a slim blonde Russian call girl whose got a cellphone and the I.Q. of a potato.  She works for the same agency Izzy did.  Punch's bit part made me laugh out loud.  She actually came off like a character from a Lubitsch comedy. 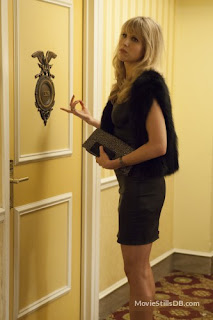 Otherwise, this new Peter Bogdanovich comedy limps along and disappoints.  Preston Sturges was a top Hollywood screenwriter at Paramount in the 1930s.  He got the power to direct his own original screenplays in the 1940s and whipped out an awesome winning streak of fabulous screwball comedies and satires loved by critics and moviegoers alike.  They were some of best Hollywood films of the 1940s, films that became true classics, classics that went on to influence future directors like Clint Eastwood and the Coen Brothers.  He opened the door for other writers to direct their own material.  Billy Wilder followed Sturges at Paramount to get that power.  Some of the Sturges gems are Christmas in July (1940), Sullivan's Travels and The Lady Eve (both 1941), The Palm Beach Story (1942), The Miracle of Morgan's Creek (1944) and Hail the Conquering Hero (1944).  These movies were so fast, witty and wise that they almost left you breathless.  As for his influence, consider this:  In his original screenplay, Sullivan's Travels, a rich young Hollywood producer is tired of making comedies.  He wants to produce gripping dramas that reflect the grim reality of life.  He options a serious novel called "O Brother, Where Are Thou?"  The rich producer learns about the grim reality of life first-hand when, through a series of mishaps that could only come from the mind of Preston Sturges, he winds up down South, a hobo mistaken for a murderer, and sentenced to a prison chain gang.  Think of the Coen Brothers movie in 2000 with the same name as that book title created by Preston Sturges for a 1941 film.

By the end of the 1940s, the bright meteor of Sturges' writing/directing career oddly began a swift descent, crashed into Earth and burned out by the end of the decade.  In the 1950s, he wrote scripts for weak remakes of two of his top movies -- one remake starred Mitzi Gaynor (based on The Lady Eve) and the other was a Jerry Lewis vehicle (based on The Miracle of Morgan's Creek).

I often think that Peter Bogdanovich was the Preston Sturges of the 1970s.  I hope he gets his director/screenwriter mojo back.  Rent his comedies What's Up, Doc? and Paper Moon.  You'll see what I mean.  Also rent Cluny Brown by Ernst Lubitsch.