Hot Dudes Screw Up in 7 MINUTES

Three of my favorite films are tales about bank robbers.  Two are based on real life characters in desperate situations.  There was 1967's Bonnie and Clyde starring Faye Dunaway and Warren Beatty as two criminals in the America ravished by the Great Depression of the 1930s.  It was a time when poor folks lost their homes to the banks.  There's 1975's Dog Day Afternoon starring Al Pacino as a robber desperate for money to pay for his boyfriend's sex reassignment surgery.  And there's the under-appreciated clever 1990 comedy, Quick Change, in which Bill Murray and Geena Davis are hapless New York City bank robbers.  He dresses up as a circus clown to commit the crime.

One of the best things I can write about 7 MINUTES is that it only robs you of 85 minutes of your time.  Jason Ritter stars as one of three criminals.  They were small town high school buddies.  They didn't amount to much after graduation.  One says, "The American dream?  That ship has sailed." 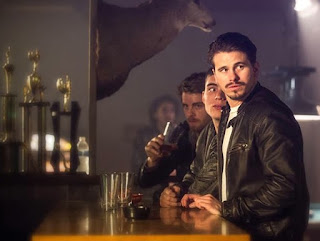 The ex-high school football hero lives with the team's gorgeous ex-cheerleader who loves him.  Their place is an absolute dump in the beat-down outskirts of Seattle.  The three buddies come up with the big idea to rob a small local bank in seven minutes flat starting one day at exactly 8:30 in the morning.  Of course, something goes horribly wrong. 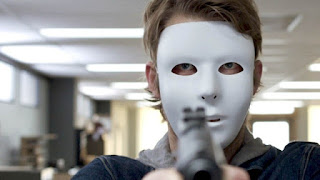 They do this because money is owed to a drug lord.  This is another crime flick with a gun-toting drug lord who wears a kimono-like robe as he threatens murder.  When the poverty-stricken ex-high school football hero embraces his former cheerleader girlfriend, I thought to myself "I bet she's a waitress."  Yep.  She's a waitress.  And a very pregnant one who has no idea her boyfriend's planning a bank heist.  Also, we have a security guard and a local cop who look like they dropped out of Weight Watchers® meetings.  Especially the local cop.  Seriously?  We got that in Jurassic World.  A dangerous dinosaur gets loose and the security guard is built like Peter Griffin on Family Guy.  The guard runs outside to protect folks but he basically becomes a dinosaur snack within minutes.  The local cop in 7 Minutes has the same kind of Peter Griffin build.  He has a crush on the shapely town slut.  During the bank job, he becomes a hostage.  We get a backstory to each robber as the crime occurs.  Here's a trailer.
For me, the highlight was seeing hot senior papa bear Kris Kristofferson.  The actor and singer/songwriter is only in the film for a few minutes.  He's related to one of the bank robbers, a guy who did time before the bank job.  The older man's advice is, "Don't get caught."  Kristofferson turned 79 this week and looks great.  Why is he in this mediocre movie?  Hey...maybe he's got COBRA payments to keep up.  A gig's a gig.

The three young robbers and the waitress girlfriend are four very attractive young adults.  And the four actors have an intelligence that breaks through their low-income characters.  They seem like people who could've gone on to college, perhaps even with some financial aid.  Couple that with the fact that they're all very attractive and that makes for a story that doesn't jell.  With their looks alone, those four young characters could've been doing local TV commercials and print ads in Seattle.  They could've had jobs in a top Seattle hotel.

These three bank robbers must not have had any ambition whatsoever after high school graduation.  You really can't have any sympathy for them.  And she seemed too smart to be just a diner waitress.  She could've been pregnant and working at a nice upscale office job. Leven Rambin, a good actress, played the waitress.

As for the story with the high school jock living with the pretty cheerleader and then being broke with a baby on the way -- it's like a John Mellencamp music video I would've presented during my VH1 days in the late 1980s.  The director of this film, by the way, used to direct music videos.

7 Minutes opens June 26th and will be available on VOD.  This tale of three golden boys gone bad is just average.  There's a major shoot out with fatalities first thing in the morning at a local small town bank.  And not one single TV news crew shows up to cover it.  And no pedestrian tries to get a photo with a cellphone.  For a better bank robber story, try one of the three older films I mention at the top of this review.
at June 25, 2015