The ex-boxer says, "I'm gonna be held in high regard again."  You'll hold a few actors in high regard after you see their performances in GLASS CHIN.  It's a good movie. 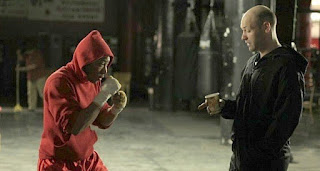 Corey Stoll is fantastic as an ex-fighter in New Jersey having a crisis of the soul at Christmastime.  When the movie opens, he's jogging up a street alone with his dog during a light snowfall.  The 1960s hit, "It's Gonna Take a Miracle." plays in the background.  The song fits as we learn the story of Bud Gordon, played by Stoll.  If you watched him as the booze and drugs-plagued politician on House of Cards and the doctor hunting The Strain in that sci-fi horror series, check him out in Glass Chin.  His physical carriage and mannerisms are totally different here. When he eats in a fancy restaurant, he even holds his utensils like a palooka.  It's not a showy role.  We don't see fight scenes like in Scorcese's Raging Bull or in Ron Howard's Cinderella Man.  And that's ok.  We don't need to see them. What we do see is an indie film that has such a unique tone, rhythm and visual style that it holds you as Bud makes the mistake of choosing ambition over friendship.  We catch hints of his spiritual restlessness and inner conflict in everyday talk.  With his Jersey girlfriend, he whines about missing the old place they had when he was a boxing star.  He says it was "party-worthy."  She likes the place they have now. 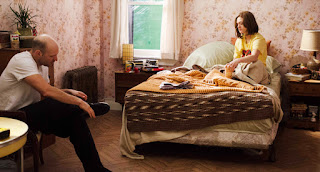 Not frilly.  The hot water is inconsistent.  But she finds it cozy.  At the boxing gym, he can't understand why the janitor always mops the floor so diligently.  As if a TV crew will show up.  The janitor takes pride in his job.  He gets irked by a comment a non-threatening homeless guy makes about a boxing match he lost.  He's rude to the poor man.  The man remarks, "Jesus got hit hard, but He stayed the course."  Bud's Jersey restaurant folded.  J.J., a handsome shark in a shiny suit, wants Bud to concentrate on Manhattan and be an entrepreneur.  J.J. dabbles in restaurants, art galleries and cocaine.  "Ordinary is the enemy," he says.  He hooks Bud into accompanying Roberto on errands.  When we see Roberto, we know Bud is wanted to be the muscle as Roberto picks up tainted money.  Instead of training a new boxer in Jersey, work that Bud does very well, he chases the spotlight down the wrong street.  He'll have serious personal choices to make.

Don't let the editing of that trailer misguide you.  One element of Glass Chin that thrilled me enough to sit through the movie twice is the director's choice of long shots...shots that stay on two characters as dialogue unfolds.  Occasionally there's a very slow push in to a medium shot.  We don't get quick, fast, jazzy editing in this movie.  It's shot in a way that make us feel as if we're eavesdroppers or voyeurs who happen to be in the room watching these intimate conversations.  Some actors are photographed in single close-ups as if they're talking to the camera.  I loved it.  The morally conflicted boxer is a theme you may have seen before but it looks fresh here.  Also, it takes talented and strong actors to do long takes with a lot of dialogue.  This is a talented and strong cast. 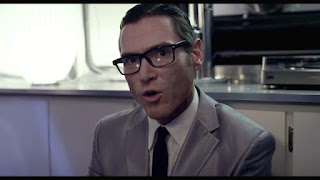 I became a Billy Crudup fan back in 2000 with his wonderful performance as Russell, the vain non-famous 1970s rock guitarist in Cameron Crowe's delightful Almost Famous.  He's one versatile actor.  You know what I mean if you've seen him in Almost Famous, as the redeemed drug addict in Jesus' Son (1999) and as the gay cross-dressing actor doing Shakespeare in 17th Century London in Stage Beauty (2004).  Crudup is on his A-game here.  One of the best scenes in the movie is the scene in which slick and sophisticated J.J. tells the hard luck boxer that he'll be framed for murder if he doesn't follow J.J.'s orders.  It mostly a long shot, one long take, in a dimly lit kitchen and the camera slowly pushes in to J.J.'s face with his shark-like dark eyes.  Excellent. 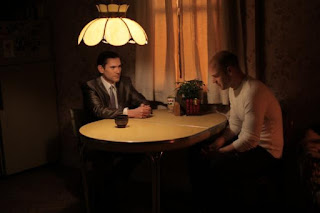 Noah Bushel, the director and writer, gave us more by doing less in the area of camera shots and energetic editing.  The revelation of raw emotions in scenes was the energy needed.  Not MTV-like quick cuts.  And he knows how to fill a frame in a very natural way. 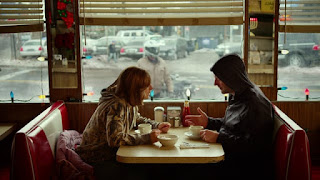 Bud's girlfriend is content to be non-famous.  She tries to make Bud rid himself of his fever to get "back to the top o' the heap."  Roberto, a war vet evicted from his home, now happily works for corrupt J.J.  Always in a black leather jacket, he's unsophisticated, aggressive, dangerous and seems to want the boxer as his occasional sex buddy. 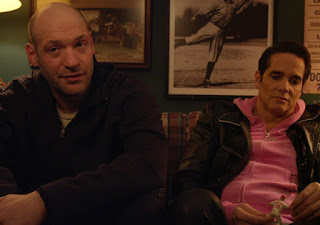 When Roberto talks to Bud about the nature of dogs, Roberto's talking about himself too.  Marin Ireland plays Bud's honorable girlfriend, Ellen.  Yul Vazquez plays Roberto who tells Bud, "People like us, we're made to go to war as entertainment for the rich." 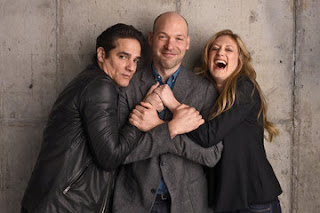 Ireland and Vazquez also do truly fine work in their performances.  Vazquez was in the classic "Soup Nazi" episode of the Seinfeld sitcom.  Glass Chin runs only 87 minutes and it's worth your time.  David Johansen, formerly rocker Buster Poindexter ("Hot, Hot, Hot"), has a small supporting role.  It's good to see him again.  A special nod goes to cinematographer Ryan Samul.   To repeat, the lead performances by Corey Stoll and Billy Crudup are a knockout.  Glass Chin opens June 26th. 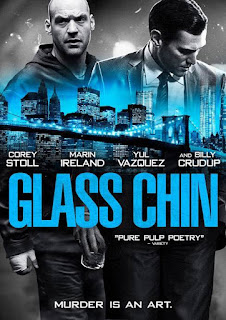